Generally, it is illegal or at least problematic for those associated with the prosecution to meet with a defendant or his family without defense lawyers present. 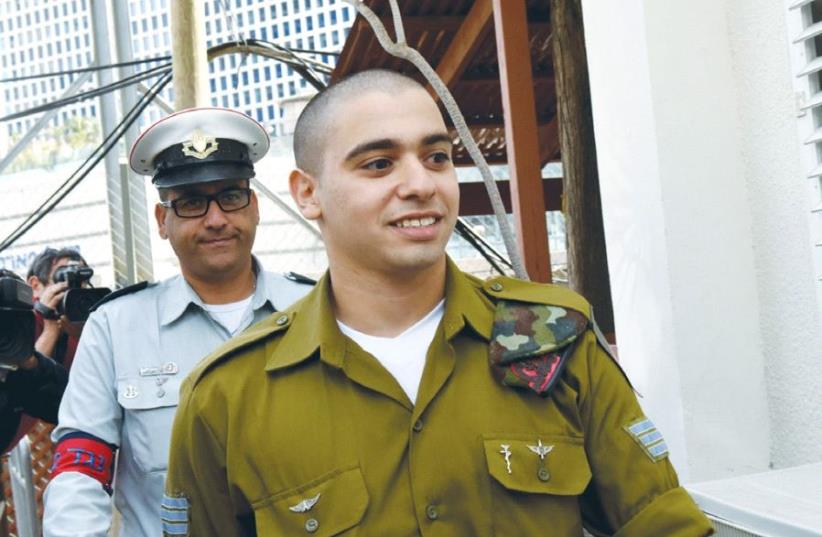 SGT. ELOR AZARIA, convicted of manslaughter for killing a terrorist, arrives for a sentencing hearing at the Jaffa Military Court in Tel Aviv on January 24
(photo credit: REUTERS)
Advertisement
The Jaffa Military Court is not expected to reduce the jail sentence that it may issue the Hebron shooter on Tuesday despite the IDF’s problematic meeting with his father out of the presence of Sgt. Elor Azaria’s defense lawyers, one expert told The Jerusalem Post on Sunday.Generally, it is illegal or at least problematic for those associated with the prosecution to meet with a defendant or his family without defense lawyers present.While qualifying his predictions as speculation, former IDF chief prosecutor Col. (res.) Liron Libman said he expected Azaria to receive at least a three-year jail sentence, as requested by the IDF prosecution.On January 31, the prosecution requested a three- to five-year prison sentence for Azaria; the maximum sentence for manslaughter is 20 years.
Tensions running high shortly before verdict in Hebron shooting case given to Elor Azaria (credit: REUTERS)
The so-called Hebron shooter was convicted on January 4 of manslaughter in the March 24, 2015, killing of Palestinian attacker Abdel Fatah al-Sharif.It has gone to the crux of a debate within Israeli society on how young soldiers should respond to ambiguous situations of Palestinian violence.Reports broke on January 11 about a meeting between Azaria’s Kfir Brigade battalion commander Col. Guy Hazot and his father, Charlie Azaria, in which the IDF allegedly offered Elor lenient treatment in an effort to end the public relations headaches and social divisions the case has created in the army and throughout the country.At a hearing on January 31, Hazot admitted that he was solely responsible for initiating contact with Azaria’s father about dropping an appeal of his son’s manslaughter conviction.The defense team brought Hazot as a witness to try to get the Jaffa Military Court to toss out the conviction, or to issue a lenient sentence in light of allegations that the IDF, through Hazot, tried to pressure Azaria into expressing regret in exchange for more lenient treatment.Most of the January 31 hearing saw Azaria’s lawyers Ilan Katz and Eyal Besserglick trying to tear down Hazot or to get him to implicate members of the IDF General Staff in a conspiracy against their client.Hazot pushed off those attempts and took sole responsibility for the meeting with Azaria’s father, though he did admit that after it he gave updates to members of the General Staff, including to Chief of Staff Lt.-Gen. Gadi Eisenkot.The defense also spent several hours questioning Maj. (res.) Ofir Sofer, who acted as the middleman in arranging the meeting between Hazot and Charlie Azaria. Sofer worked as Hazot’s deputy before retiring from the IDF.Besserglick tried to get Sofer to admit to a conspiracy to pressure Charlie Azaria. But the most Sofer gave in return was that Hazot had mentioned to him that right after the manslaughter conviction there was a “window of opportunity.”While the defense interpreted this as a conspiracy to bully Elor Azaria into surrendering his narrative and appeal, Hazot and Sofer both said they merely saw that the verdict was very serious, and thought it might be to his benefit to consult with the IDF public defender about a less aggressive litigation strategy that could lead to a deal on sentencing.While there has been speculation that after all of these unusual events the court might try to quell criticism of it and of the IDF’s conduct by giving Azaria a lighter sentence than it would otherwise, Libman said that he did not think that this would reduce the sentence to less than three years in jail.Libman also did not believe the court would be overwhelmed by public pressure.According to polls taken following the verdict, two-thirds of Israelis thought that Azaria should get a full pardon, and a slight majority said he should have been found not guilty.Following his sentencing, Azaria is expected to appeal, charging that the trial was biased due to public pronouncements against him by former defense minister Moshe Ya’alon, Eisenkot and other IDF officers, who he said influenced witnesses during the trial and the judges.If he loses that appeal, he can request a pardon from Eisenkot, and if he does not receive that pardon, he can go one step higher and ask Defense Minister Avigdor Liberman to propose to President Reuven Rivlin to pardon him.In the March 24 incident, Sharif stabbed another soldier, a friend of Azaria, and was then shot several times and fell to the ground, staying nearly motionless.By the time Azaria arrived around 10 minutes later, other IDF personnel in the area did not view Sharif as a concrete threat, even though some soldiers and many civilians saw him as a potential threat.If he was not a threat, Azaria’s job as a medic would have been solely to attend to the wounded. Instead, he was seen across the globe on a video shooting Sharif in the head, killing him in a seemingly execution-style manner.Azaria claimed self-defense, saying he was concerned Sharif would attack again with a knife or that he was wearing a concealed explosive vest. However, the Jaffa Military Court rejected all his arguments as being invented after the fact, and convicted him based on his original explanations that he shot Sharif out of revenge.