IDF chief and politicians from Right and Left come out in support of officer. 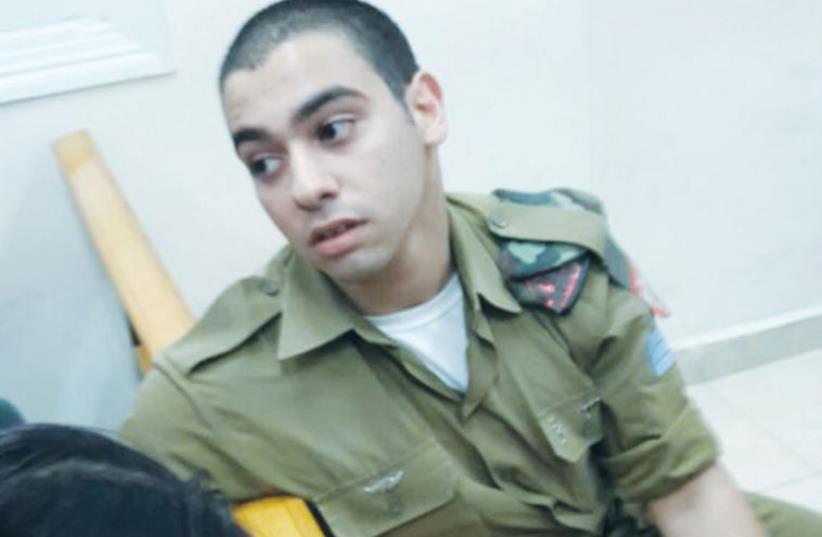 SGT. ELOR AZARIA relaxes for a moment at the beginning of his manslaughter trial yesterday at Jaffa Military Court
(photo credit: YONAH JEREMY BOB)
Advertisement
IDF Chief of Staff Lt.-Gen. Gadi Eisenkot on Sunday came to the defense of the IDF officer who testified in the case of Elor Azaria, the soldier accused of manslaughter for shooting an already neutralized and unarmed Palestinian terrorist."Maj. Tom Naaman has the full support of the IDF," Eisenkot stated after Naaman recieved hundreds of hate-filled phone calls, as well as text and Facebook messages deriding him as not worthy of being an officer, being a "traitor" and other such comments."The norm expected of IDF personnel is first and foremost to tell the truth and let the court-system work without external pressures," said the chief of staff. He condemned any pressure on the witnesses involved in the Azaria trial.
Naaman, who was Azaria's officer during the time of the incident, testified on Thursday that Azaria told him after the shooting that the "terrorist was alive and needed to die." Naaman also said in his testimony that he did not feel that there was any danger coming from the terrorist at the time of the incident. Both facts came in direct contrast to Azaria's claims.
Politicians from across the political spectrum responded quickly, coming to Naaman's defense.
MK Tzipi Livni (Zionist Union) stated that "in the face of such attacks on Maj. Naaman who did his duty and truthfully testified in court, we must all stand with him against these attacks. Silence is not an option."
She also said that "these are times in which Israel has to make a choice between truth and lies, principle or anarchy, between the moral army we send our children to and  an army that listens to the growl of the mob."
MK Yoav Kish of the Likud also came out against the attacks on Naaman, stating, "I absolutely condemn the contemptible comments directed at Maj. Naaman. I call on the police and Justice Ministry to deal with the inciters."
Former defense minister Moshe Ya'alon also came to Naaman's defense, saying incitement against him "crossed a line."
"Incitement against the company commander Major Tom Naaman, is another example of crossing a line, and it must be fought," Ya'alon wrote on Facebook. "I urge the leadership to stop winking at the extremist minority, and come out loud and clearly against this unacceptable phenomenon, and provide basic management and support for a soldier and commander who has shown courage, not only on the battlefield."
The overwhelming responses prompted Azaria's lawyer Carmit Shchiver to say that "It is forbidden to slander IDF soldiers."
Advertisement
Subscribe for our daily newsletter