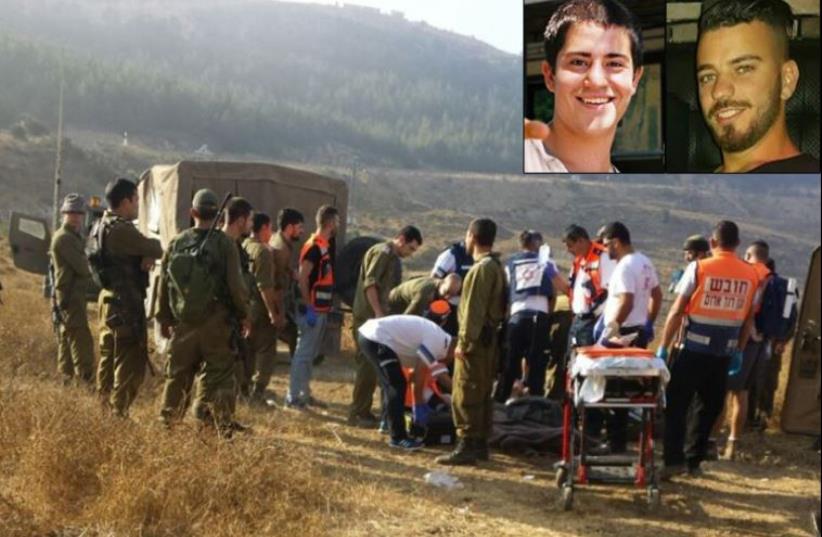 IDF Sgt. Shlomo Rindenow and St.-Sgt. Husam Tafash, who were killed Sunday in a grenade explosion in northern Israel
(photo credit: UNITE HATZALAH WEST BANK,Courtesy)
Advertisement
The IDF reprimanded two commanders and banned a third from further service for three years following a deadly grenade accident that occurred in July in the Golan Heights.The July 17 blast killed 20-year-old Sgt. Shlomo Rindenow, a soldier in the 401 Brigade, originally from New Jersey, and 24-year-old St.-Sgt. Husam Tafish, of Beit Jann. A squad commander sustained wounds in the accident.According to the IDF investigation, a grenade was likely accidentally left on the side of the road by the previous shift of soldiers who were near the Hermon post. It was picked up by St.-Sgt. Tafish, who was driving a light armored vehicle and stopped the vehicle ahead of the checkpoint. A senior IDF source said the investigation found that Tafish mishandled the grenade and accidentally detonated it. The incident occurred at the entrance to the Majdal checkpoint, and Sgt.Rindenow was part of the checkpoint personnel.The commander of Battalion 601, from the Combat Engineers, received a written reprimand, while a company commander, who completed his IDF service as planned, will not be permitted to serve as a commander for three years in the reserves. The squad commander involved in the incident also received a written reprimand from his commanders.IDF Chief of Staff Lt.-Gen. Gadi Eisenkot ordered all soldiers involved in the incident to study the conclusions of the investigation. "On the one hand we need to take grenades to this sector, but on the other, they must be handled and stored with the utmost caution," an IDF source said.