An outspoken advocate for tolerance regardless of color, creed, nationality or political ideology, Rivlin said: “We must begin to speak to each other, and not just to speak but to listen." 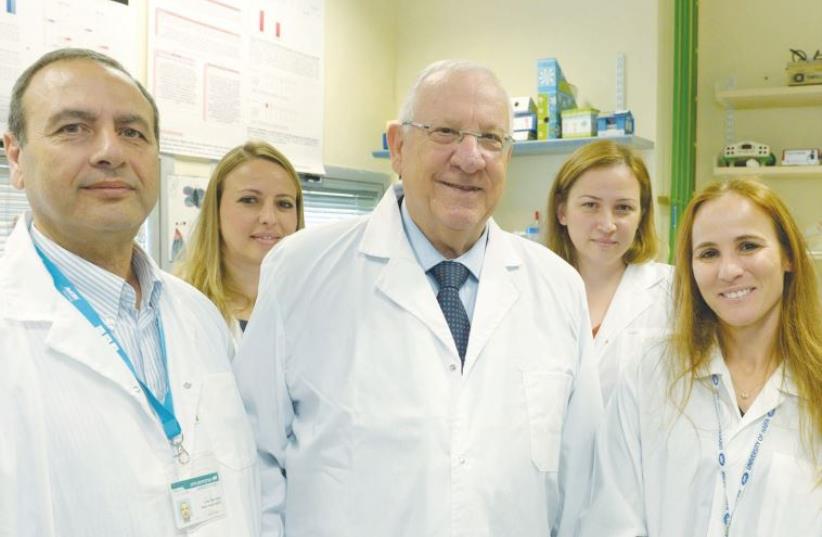 PRESIDENT REUVEN RIVLIN visits a molecular biology laboratory at the University of Haifa
(photo credit: Mark Neiman/GPO)
Advertisement
President Reuven Rivlin explained to students at the University of Haifa on Sunday why he participated in the Haaretz conference this month that came under fire for controversies that erupted over the national flag being removed from the podium and government officials’ differences with the Breaking the Silence group.“I was invited to the Haaretz conference and I agreed to participate in it because I think that anyone who is part of Israeli society can come and say what he thinks, even when such viewpoints are piercing,” Rivlin said.“I made it unequivocally clear at the conference that we are all part of the State of Israel. The soldiers in the Israel Defense Forces are our sons and daughters, our grandsons and granddaughters, and while they defend us, we must defend them,” the president said.Rivlin said he had remarked at how there was no Israeli flag on the stage, and that it was untenable for a president of Israel to speak on any platform without a national flag alongside or behind him.The flag had apparently been removed at the request of Saeb Erekat, a senior Palestinian official who spoke at the conference.Rivlin was not present when Erekat spoke.Rivlin, though a longtime member of the Likud, has emphasized time and again that he is president of all citizens of Israel and not only of those whose views he shares.An outspoken advocate for tolerance regardless of color, creed, nationality or political ideology, Rivlin said: “We must begin to speak to each other, and not just to speak but to listen to each other.”Asked about the criticism to which he has been subjected over the past week for attending the parley, Rivlin said that the nature of relations between different sectors of Israeli society sometimes touches raw nerves, which accounts for some of the harsh responses.There are people who benefit from fanning the flames of the conflict, he said. “I was not elected simply for the purpose of my portrait being hung on the wall. I was elected in order to exert influence...I feel responsible even for those who attack and criticize me. I am the president of all citizens of Israel.”Rivlin recalling his own student days at the Hebrew University of Jerusalem and how the campus provided a platform for people of diverse opinions and backgrounds to come together and air their views.“The university is a first meeting place for the various tribes of Israel, and the university has a vital role in formulating the new Israeliness,” he said. “The strength of the university is in its ability to train the leadership of the future.”