These resolutions are “incomprehensible, unacceptable and wrong,” Italian Prime Minister Matteo Renzi told an Italian Radio station during a visit to Brussels. 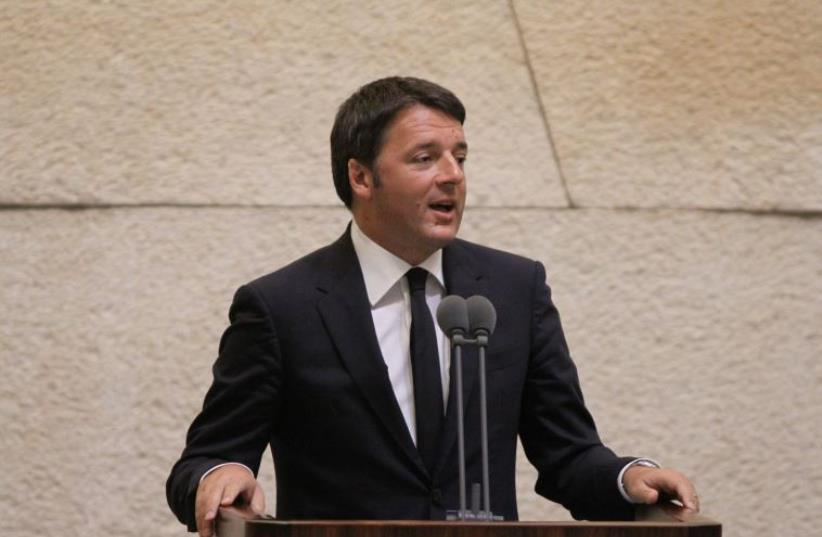 Italian PM Matteo Renzi addresses Knesset‏
(photo credit: KNESSET SPOKESMAN'S OFFICE)
Advertisement
In a sign that European countries may be increasing their support for Israel’s battle against UNESCO’s Jerusalem resolutions, Italy announced on Friday that it would vote against such texts in the future.These resolutions are “incomprehensible, unacceptable and wrong,” Italian Prime Minister Matteo Renzi told an Italian Radio station during a visit to Brussels. Earlier this week he was in Washington, where he was honored with a state dinner at the White House.Renzi’s decision increases to seven the small bloc of six-countries that have opposed these resolutions. Ultimately, if Israel plans to defeat such resolutions it will need countries to follow Italy’s lead, rather than Mexico’s, which made headlines earlier this week when it withdrew its support from the Jerusalem text.Mexico, however, doesn’t plan to oppose the measure, intending instead to take the neutral position of abstaining. Such abstentions help Israel secure a moral victory, but ultimately do not help it defeat such Jerusalem resolutions which ignore Jewish and Christian ties to Temple Mount, referring to it solely by its Muslim name of Al Haram Al Sharif.“We warmly congratulate the Italian government and the Italian Prime Minster for this useful statement,” Foreign Ministry spokesman Emmanuel Nachshon said.“We hope Italy guides the way for other European countries and countries all over the world,” Nachshon said.Israel, however, has little time to bask in the victory of securing Italian support, because the 21-member World Heritage Committee is set to vote next week on a resolution to reaffirm the placement of Jerusalem’s Old City on the list of World Heritage in Danger.The vote is routine, but the text — much like the one that was approved Tuesday by UNESCO’s 58-member Executive Board — is expected to focus almost exclusively on Muslim terms for the area.Italy’s abstention on that vote angered the country’s Jewish community which published letters in the media, took to social media and worked along with Israel’s embassy in Rome to change the countries stance.Italy, however is not one of the 21 nations that make up the World Heritage Committee. But Israel’s is hopeful that its statement might have an impact on the committee whose members are: Angola, Azerbaijan, Burkina Faso, Croatia, Cuba, Finland, Indonesia, Jamaica, Kazakhstan, Kuwait, Lebanon, Peru, Philippines, Poland, Portugal, Republic of Korean, Tunisia, Turkey, Tanzania, Vietnam and Zimbabwe.Since 2015, the Palestinian Authority has pushed to change the language by which UNESCO speaks of Jerusalem and the holy sites, so that they are referred to almost exclusively by their Muslim names.As part of that drive the PA, or members of the UN's Arab group submits Jerusalem resolution to UNESCO at every possible opportunity.