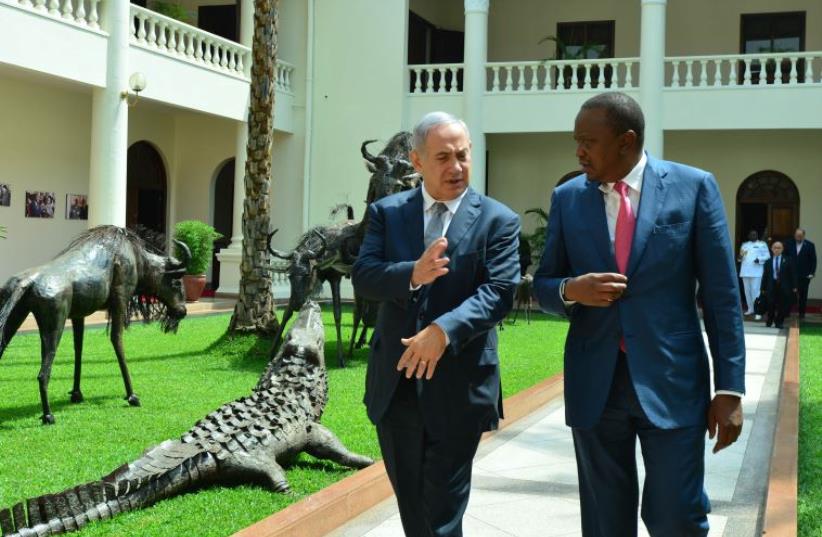 PM Netanyahu and Kenya’s President Uhuru Kenyatta
(photo credit: KOBI GIDEON/GPO)
Advertisement
NAIROBI – With two days and two states left on his five-day, four state African visit, Prime Minister Benjamin Netanyahu was already thinking of upcoming trips, telling reporters Tuesday that he will visit Kazakhstan, and possibly Azerbaijan, by the end of the year.Both are Muslim countries that are strategically very important for Israel. They are Israel’s two largest oil exporters, and Azerbaijan shares a border with Iran.Perhaps most significantly at this time, Kazakhstan will become one of the five rotating members of the 15-member UN Security Council when it takes up this seat for two years beginning on January 1 2017.In addition to Kazakhstan, Sweden, Bolivia, and Ethiopia were also voted onto the council.It is not coincidental, therefore, that Netanyahu will travel to Ethiopia Wednesday night for a 36-hour visit. In 2014, two of the three African countries on the council at the time – Nigeria and Rwanda – were instrumental in keeping the Palestinians from getting the nine votes they needed to get a resolution calling for Palestinian statehood adopted.Netanyahu will travel to Rwanda on Wednesday for eight hours.The final seat on the security council in 2017 will be split between Italy and the Netherlands.Bolivia broke off ties with Israel in 2009, and its President, Evo Morales, declared Israel a “terrorist state” in 2014, during Operation Cast Lead.But Bolivia does not represent all of Latin America, and Netanyahu – in answer to a question from The Jerusalem Post – said that just as he traveled to Africa, the first Israeli prime minister to do so in more than two decades, he also hopes to travel to South America. No sitting Israeli prime minister has ever traveled to that continent. He did not provide a timetable.Netanyahu said that Israel’s ties with Latin America are improving, saying that during the last week alone he spoke by phone with the leaders of Mexico, Colombia and Peru.