In rare move, Netanyahu to bring army chiefs to meet Putin in Moscow

Top IDF generals very rarely accompany the prime minister on his trips abroad, with the premier’s military attaché generally the only uniformed officer who joins these overseas trips. 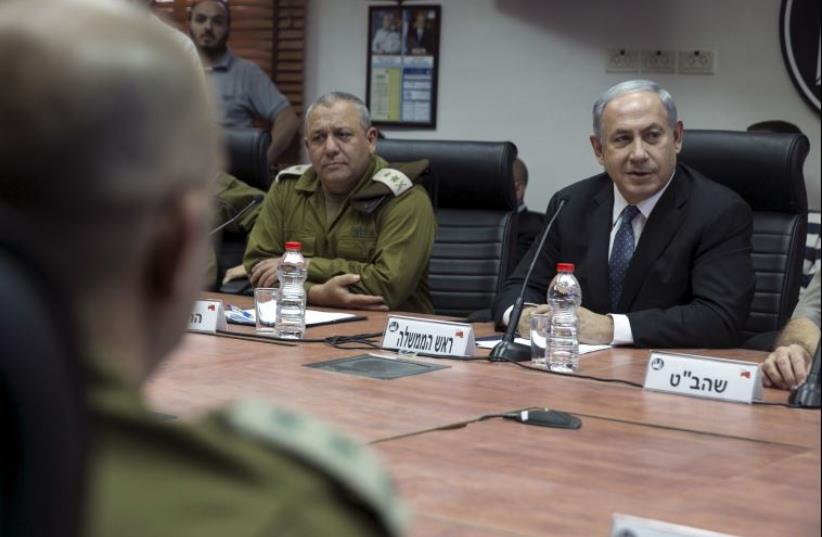 Prime Minister Benjamin Netanyahu (R) and IDF chief of staff Gadi Eisenkot attend a briefing at the IDF Home Front Command base in Ramle near Tel Aviv
(photo credit: REUTERS)
Advertisement
IDF Chief-of-Staff Lt.-Gen. Gadi Eisenkot and Military Intelligence chief Maj.-Gen. Herzl Halevi will accompany Prime Minister Benjamin Netanyahu on a lightning trip to Moscow on Monday, in a clear signal that regional arms transfers and Russia’s troop deployments in Syria will be the main focus of the discussions.Top IDF generals very rarely accompany the prime minister on his trips abroad, with the premier’s military attaché generally the only uniformed officer who joins these overseas trips.The seriousness with which Israel is taking the new developments in Syria, and Russia’s growing troop physical involvement there, is reflected in Netanyahu’s decision to bring both Eisenkot and Halevi on the trip.Netanyahu will be flying to Moscow on Monday for some three hours to meet with Russian President Vladimir Putin. He will not be accompanied by the press.It is expected that Eisenkot will discuss coordination with his military counterparts in Moscow to fend off any inadvertent engagement between Russian troops now present in the area of the port city of Latakia, and Israeli forces.Israel has said on numerous occasions that it reserves the right of action to prevent state-of-the-art weaponry from being transferred either from Iran to Hezbollah via Syria, or to prevent the “leakage” of similar cutting edge weaponry from the Syrian army to Hezbollah. According to foreign reports, Israel has indeed taken action over the last few years to prevent such arms transfers.Halevi, meanwhile, sits atop Israel’s intelligence information regarding what type of weaponry is “leaking” from Syria to Hezbollah.When talking of the weaponry finding its way into Hezbollah’s hands, Jerusalem does not accuse Moscow of intentionally supplying arms to Hezbollah or other terrorist groups, but rather warns that in the chaotic situation in Syria there is little way to safeguard the arms and ensure that none of it ends up in the wrong hands.“Over the years we have raised our concerns about the transfer of Russian military equipment to the region, where Russian equipment ends up in Hezbollah’s hands,” one government official said, adding that “unfortunately over the last two years we have seen an increase in the weapons reaching Hezbollah.”Netanyahu is also expected to discuss with Putin Russia’s decision to supply Iran with S-300 anti-aircraft missiles.Moscow has so far refused to provide that system to Syria, heeding Israel’s concern that those missiles could take down aircrafts flying over Israel.While Netanyahu speaks periodically on the phone with Putin, this will be their first meeting since November 2013, and the first one since the Ukraine crisis and Russia’s growing tensions with the West. Israel kept a very low profile during the 2014 Crimean crisis.Israel has an open dialogue with Russia, and although the countries do not see eye-toeye on many critical issues, the sense in Jerusalem is that Moscow is motivated in its actions in the region by its perception of its own interests, and not out of a desire to harm Israel.In a related development, the cabinet on Sunday approved the appointment of Zvi Heifetz as the country’s next envoy to Moscow. The 59-year-old is Russian-born and immigrated to Israel at the age of 14. He served formerly as Israel’s ambassador to Britain. He will be the second native-Russian speaker in a row to serve in Moscow, succeeding outgoing ambassador Dorit Golender.