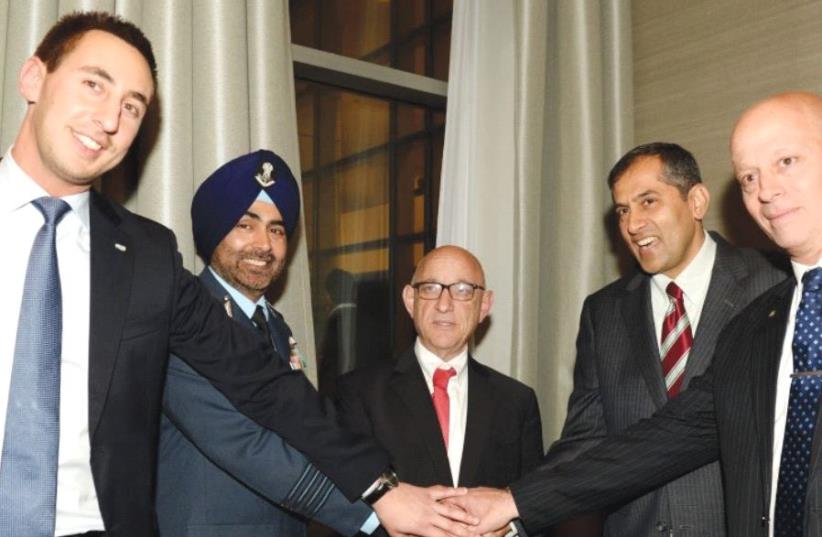 SMILING IN HERZLIYA on Tuesday night are (from left) ISDEF President Tomer Avnon, Indian Ambassador Pavan Kapoor, acting NSC head Yaakov Nagel, Indian military attaché Tejpal Singh and ISDEF marketing CEO Jonas Zilkin.
(photo credit: STUDIO A)
Advertisement
Indian Ambassador to Israel Pavan Kapoor, speaking at a diplomatic reception in Herzliya on Tuesday night, said there is a long and strong defense partnerships between the two countries, and New Dehli has been working to make it easier for Israeli companies to manufacture in his country.“You can be doing much more in India with Indian partners,” Kapoor told those in attendance, including acting head of the National Security Council Yaakov Nagel and other senior Israeli defense officials, the ambassador of the European Union, as well as ambassadors and military attachés from the US, Australia, Russia, Egypt and Turkey.“There have been many joint partnerships recently and we hope that there will be more in the future,” Kapoor added.
India and Israel agree to join forces to fight terror as Rivlin and Modi meet
More than 50 Indian defense companies will be showcased at the 8th International Defense and Homeland Security Expo (ISDEF) in Tel Aviv on June 6-8 to mark the 25th anniversary of diplomatic relations between the South Asian country and Israel.Prime Minister Narenda Modi is expected to undertake the historic first visit to Israel by an Indian head of government this summer.Dr. Anju Kumar, deputy chief of mission of India in Israel, told The Jerusalem Post that it is “very important for us to mark this anniversary, because the relationship between our two countries has picked up and is on a whole new level.”Kumar said ties have not only expanded in the sphere of defense but in all areas, including political, educational and cultural, referring to a direct flight between New Delhi and Tel Aviv that is expected to start in May.“India has by and large been able to manage border conflicts in peaceful manner. But the threat of terrorism looms,” she said, adding that “the everyday person in India isn’t concerned about defense.”They are focused on bettering their lives and educating their children, she said.“There are lots of complementary things between Israel and India,” Kumar said. “Israel is known for its innovation, and producing in India allows Israel to sell to thirdworld countries it couldn’t do before.”As part of the 25th anniversary celebrations, three ships from the Indian Navy’s Western Fleet will dock in Haifa in May.According to the Indian Embassy, the destroyer INS Mumbai, frigate INS Trishul and tanker INS Aditya will be in Israel from May 9-12, and over “the course of the visit, the Indian crew will interact with personnel of the Israeli navy, and there will be exchange visits, sports activities and courtesy calls. The crew will also visit various areas of cultural and historical interest in Israel.”Israel has been supplying India with various weapons systems, missiles and unmanned aerial vehicles over the last few years, making India one of Israel’s largest buyer of military hardware.Over the last five years, bilateral non-defense trade between the countries has averaged $4.6 billion per annum and defense trade has seen annual sales worth more than $1b.India is one of the largest importer of arms, with a 14% share in global imports between 2011 and 2015, according to the Stockholm International Peace Research Institute, and next to Russia and the United States Israel is the largest source of key defense equipment for India as well as in other areas such as agriculture and water management.In February, ahead of the Aero India 2017 convention in Bengaluru (Bangalore) that saw more than a dozen Israeli companies showcasing their military technology, Brig.- Gen. (res.) Michel Ben-Baruch, director of SIBAT – The Defense Ministry’s International Defense Cooperation Authority, said there has been a “strengthening of cooperation between Israel and India in many fields” in recent years, most prominently in defense technology.Nagel told the crowd a significant portion of the challenges Israel faces are global.Over the years, Israel’s policy has been to forge alliances as a response to global terrorism, he said. Israel has been sharing what it has learned from countering the threats not only with allies but with some countries it does not have diplomatic relations with.The ISDEF exhibition, which will bring in officials and delegates from dozens of countries and over 220 exhibitors, is set to be the largest security exhibition ever held in Israel.Three Turkish companies will showcase their products at the exhibition for the first time since the rupture of ties between Ankara and Jerusalem. Several other Muslim countries, including Bosnia, Indonesia, Mali and Morocco, will also participate, while officials from Jordan, Egypt and Malaysia are expected to attend in an unofficial capacity.