Swaraj's appointment as foreign minister in 2014 was welcomed in Jerusalem, since she served from 2006 to 2009 as chairwoman of the Indo-Israeli Parliamentary Friendship Group. 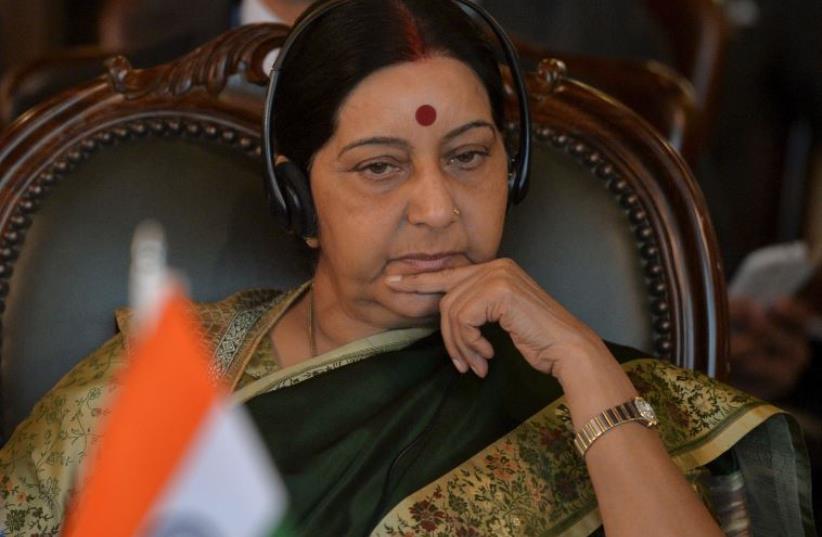 Indian Foreign Minister Sushma Swaraj
(photo credit: REUTERS)
Advertisement
Indian Foreign Minister Sushma Swaraj is expected to make a long-delayed visit to Israel in January, diplomatic officials in Jerusalem confirmed on Thursday.The visit, which the Indian television network NDT V said would take place from January 16-19, would follow by just three months the first-ever visit to Israel by an Indian head of state, President Pranab Mukherjee, and signify a further flowering in relations between the countries.There was speculation last January that Swaraj would come then as well, and in May she said that she would visit Israel by the end of the year, but neither of those visits materialized.Some logistical issues need to be worked out this time, as well, before Israel can formally announce Swaraj’s visit, sources in Jerusalem said.There was talk earlier this year that Indian Prime Minister Narendra Modi would visit by the end of the year, but that visit, too, did not get off the ground. Nevertheless, Prime Minister Benjamin Netanyahu, who has said he has a close relationship with Modi, met with him last month on the sidelines of the climate change conference in Paris.Swaraj’s appointment as foreign minister in 2014 was welcomed in Jerusalem, as she served from 2006 to 2009 as chairwoman of the Indo-Israeli Parliamentary Friendship Group, and visited the country in 2008, praising Israel at the time for proving a “reliable partner” in India’s 1999 war with Pakistan.According to NDT V, India’s Agriculture Minister Radha Mohan Singh will visit Israel a few days before the foreign minister. The two countries did $4.45 billion in trade in 2014, compared to $3.3b. in 2007.