Rivals of the Shas chairman expressed satisfaction and hope that the alleged scandal will lead to the end of his career. 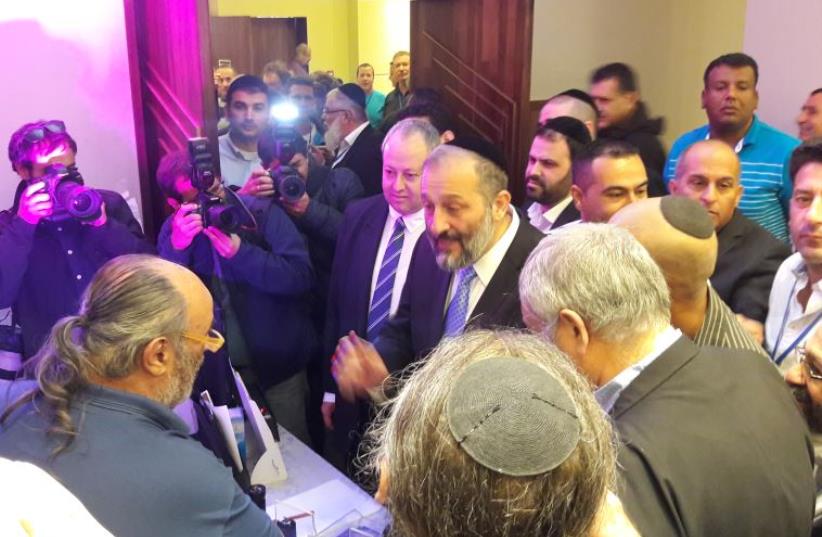 Aryeh Deri speaks at Ramada Jerusalem hotel, 30.03.16.
(photo credit: GIL HOFFMAN)
Advertisement
Interior Minister Arye Deri promised to cooperate with law enforcement late Tuesday after Channel 2 reported that his name was
linked in a preliminary probe into alleged wrongdoing. Deri took to Twitter after Channel 2 reported that Attorney-General Avichai Mandelblit will have to decide whether to launch a criminal investigation against him over possible corruption-related crimes that could have far reaching political consequences. The decision is expected to be the first test for Mandelblit, who entered his post in January. When reached by Channel 2 on Monday, Deri said he was unaware of the scandal. Rivals of the Shas chairman expressed satisfaction and hope that the alleged scandal will lead to the end of his career. More information currently cannot be expanded on the matter.Mandelblit is expected to convene the heads of his investigations department in order to decide whether to summon Deri for questioning under caution.Once considered a political force after his meteoric rise to the chairmanship of the ultra-Orthodox Sephardic movement, Deri saw his promising career derailed in 2000, when he was sentenced to three years in prison for accepting bribes.After returning to politics, Deri orchestrated the removal of his chief rival within Shas, Eli Yishai, and re-claimed the No. 1 mantle. His re-appointment to the post of interior minister in the current Netanyahu administration - the job he held before his conviction - was met with fierce criticism from anti-corruption NGOs who argue that his prior criminal activities precluded him from holding such a sensitive post.