Neda Amin has been in a court battle to prevent her repatriation. 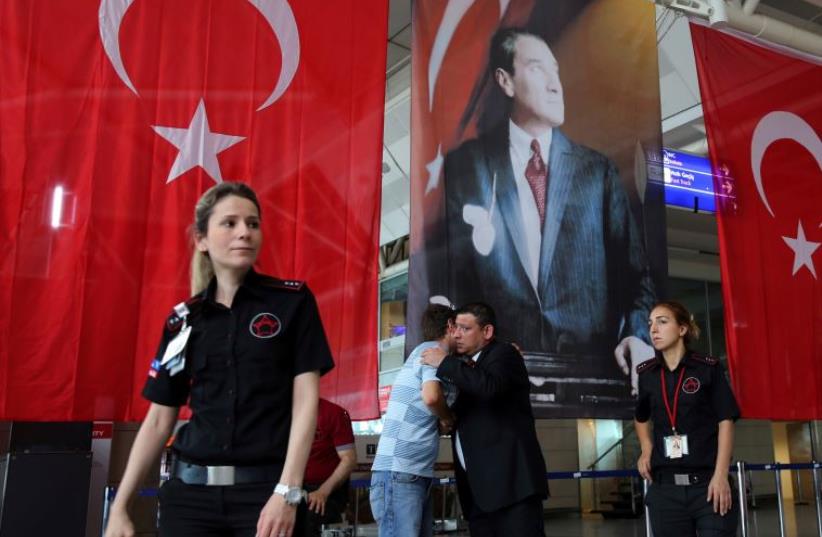 Men greet each other in front of Turkish flag and picture of modern Turkey's founder Mustafa Kemal Ataturk at Istanbul Ataturk airport, Turkey, following yesterday's blast June 29, 2016.
(photo credit: REUTERS)
Advertisement
Deputy Foreign Minister Tzipi Hotoveli told Israel's Reshet Bet radio on Monday that the Iranian blogger who was offered asylum in Israel was delayed from coming to the country because of "personal reasons" and would be arriving in "the coming days."Hotoveli also said that the Israeli consulate was in touch with her.Israel's foreign ministry was looking into reports that the Turkey-based Iranian blogger who was offered asylum in Israel was arrested at Istanbul Airport Monday morning, according to Reshet Bet radio station. The blogger, Neda Amin was reportedly en route to Tel Aviv.
Times of Israel Editor-in-Chief David Horovitz who's online publication featured Amin's blogs tweeted that the report was false.

Before others rush to repeat it, Israel Radio's report saying that Neda Amin has been arrested is not true.
— David Horovitz (@davidhorovitz) August 7, 2017

Neda Amin faced forcible deportation to Iran, where she would be at risk given her work as a Persian-language blogger at an Israeli news site, before Israel offered her asylum on Sunday. Amin left Iran in 2014 for Turkey, according to The Times of Israel. She has been in a court battle to prevent her repatriation and has sought other countries that might take her in as a refugee, the site said.
Iranians are generally not admitted to Israel, due to hostility between the two countries.
But following appeals by Israel's journalist federations, Interior Minister Aryeh Deri said he would issue 32-year-old Amin with a special visa on Sunday.
"This is a journalist whose life is in real danger," Deri said in a statement. "Given the clear humanitarian circumstances, I authorized her entry without delay."
Reuters contributed to this report.