The global arrogance (the United States and its allies) wants to create discord among Muslims ... Unity is the only way to restore stability in the region," Rouhani said. 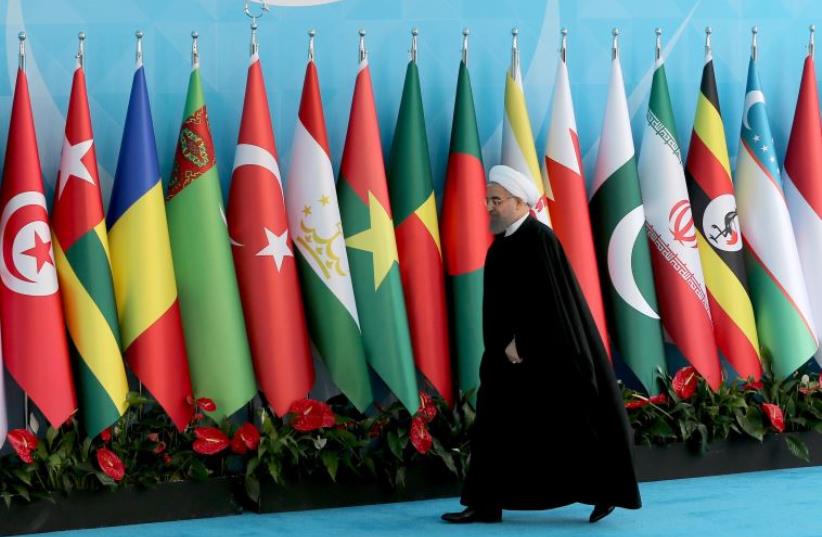 Iranian President Hassan Rouhani arrives the Organisation of Islamic Cooperation (OIC) Istanbul Summit, April 14, 2016
(photo credit: REUTERS)
Advertisement
Iran's President Hassan Rouhani accused Western powers of trying to exploit differences between the world's Sunni and Shi'ite Muslims to divert attention from the Israel-Palestinian conflict, state television reported on Friday.Rouhani's comments came as tens of thousands of Iranians joined anti-Israel rallies across the country to express support for the Palestinians. They chanted "Death to Israel" and "Death to America" and burned the Israeli flag."The global arrogance (the United States and its allies) wants to create discord among Muslims ... Unity is the only way to restore stability in the region," Rouhani said."We stand with the dispossessed Palestinian nation."Opposition to Israel, which Tehran refuses to recognize, has been a cornerstone of Iranian policy since its 1979 Islamic revolution. Shi'ite Muslim Iran backs Palestinian and Lebanese militant groups who oppose peace with Israel."The Zionist regime (Israel) is a regional base for America and the global arrogance ... Disunity and discord among Muslim and terrorist groups in the region ... have diverted us from the important issue of Palestine," Rouhani said.Shi'ite-led Iran has repeatedly called on its Sunni Muslim rival Saudi Arabia to help improve their strained bilateral relations and work for stability in the Middle East.Arch-rivals for regional hegemony, the two oil producers are on opposite sides in proxy battles in the region, where they back competing factions in Iraq, Syria, Yemen, Lebanon and Bahrain.Ties have worsened since Riyadh's execution in January of prominent Shi'ite cleric Nimr al-Nimr prompted attacks on the Saudi embassy in Tehran. Saudi Arabia subsequently cut all ties with Iran.Riyadh is worried that a landmark nuclear deal reached between Iran, the United States and five other major powers in 2015 will help Tehran gain the upper hand in their regional standoff.MISSILE DEFENSE SYSTEMIran's elite Revolutionary Guards Corps (IRGC) said in March that "the occupied Palestinian territories are within the range of most of the Islamic Republic’s missiles", Iran's state television Press TV reported.A senior IRGC commander said Iran's new Russian-made S-300 missile defense system would be operational by March."Its divisions are being delivered to Iran and the system will be operational by the end of this Iranian year," the semi-official Tasnim quoted Amir Farzad Esmaili as saying.Russia delivered the first part of the S-300 missile defense system to Iran in April, one of the most advanced systems of its kind that can engage multiple aircraft and ballistic missiles around 150 km (90 miles) away."Hezbollah has 100,000 missiles that are ready to hit Israel to liberate the occupied Palestinian territories if the Zionist regime repeats its past mistakes," Tasnim quoted IRGC deputy head Hossein Salami as saying