Is Israel on collision course with world's largest Muslim country?

Indonesia is intent on bringing the Palestine question to the forefront of global diplomacy. 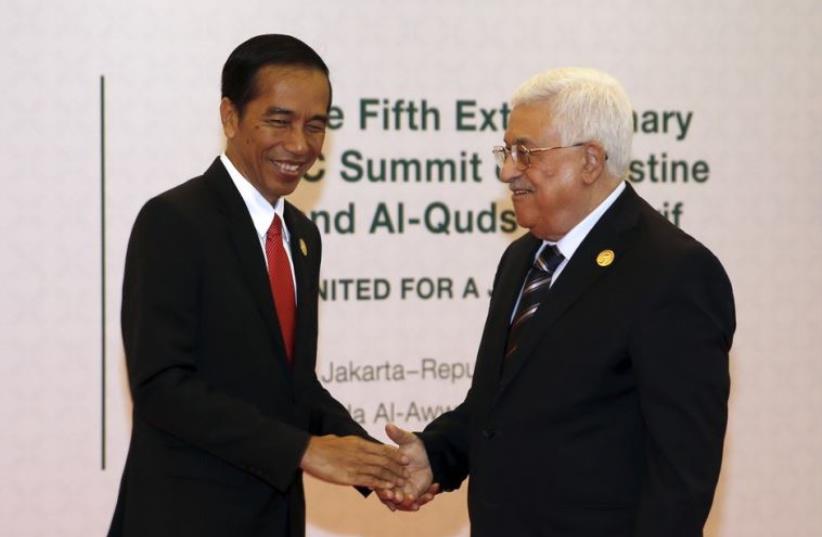 Indonesian President Joko Widodo (L) welcomes Palestinian President Mahmoud Abbas to the 5th Organization of Islamic Cooperation (OIC) Summit on Palestinian issues in Jakarta
(photo credit: REUTERS)
Advertisement
Israel must decide whether to grant entry permits to the foreign minister of Indonesia, who is planning a trip to meet Palestinian Authority officials in Ramallah within the coming weeks, according to Channel 2.The world’s largest Muslim country is intent on bringing the Palestine question to the forefront of global diplomacy. To that end, Jakarta wants to inaugurate an honorary consulate office in the Palestinians’ provisional capital, Ramallah, next week.Last week, Palestinian President Mahmoud Abbas met his Indonesian counterpart Joko Widodo in Jakarta as the Organization of Islamic Cooperation held a summit meeting to discuss the Israeli-Palestinian peace process.The summit was aimed at strengthening the OIC's support for the Palestinians, Indonesia's foreign ministry said, according to local media.US-led efforts to broker a "two-state solution" between Israel and Palestine collapsed in 2014, and there has been no serious attempt to revive them.The OIC meeting comes as a wave of Palestinian-Israeli heightened violence, now in its sixth month, has shown no sign of abating and has raised concern of further escalation. Since October, Palestinian stabbings, shootings and car rammings have killed 28 Israelis and two US citizens. Israeli security forces have killed at least 173 Palestinians, 115 of whom Israel says were assailants, while most others were shot dead during violent protests.The bloodshed has been fueled by various factors, including a dispute over Jerusalem's al Aksa mosque compound and the failure of several rounds of peace talks to secure the Palestinians an independent state in Israeli-occupied territory.Palestine has non-member observer status at the United Nations and its flag flies with those of member states at UN headquarters in New York. Sweden became the first member of the European Union to recognize a Palestinian state in 2014, and several other states have followed.Palestinians seek a state in Gaza, the West Bank and east Jerusalem, parts of which have been occupied by Israel since 1967.Reuters contributed to this report.