Israel and Greece send message to Turkey: Our friendship is not aimed against you

“Our cooperation with Greece and Cyprus stands on its own,” Netanyahu said at a joint press conference in Jerusalem with Tsipras. 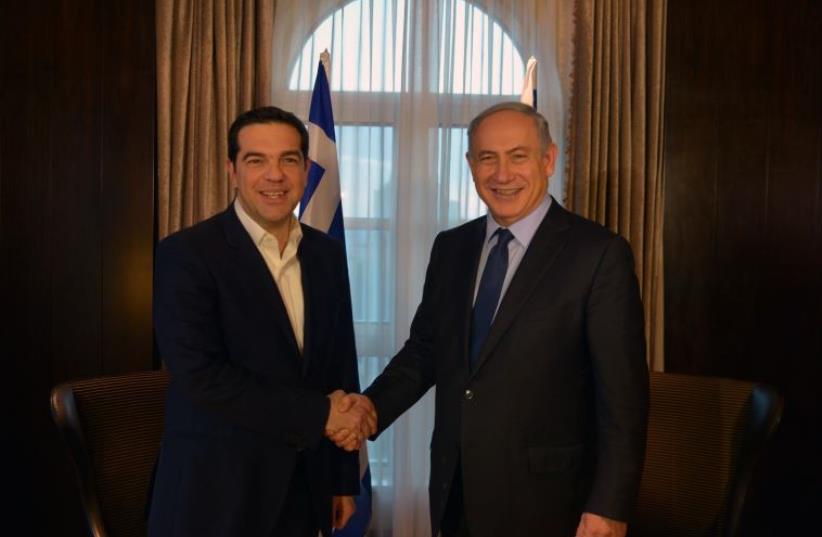 Prime Minister Benjamin Netanyahu and his Greek counterpart Alexis Tsipras
(photo credit: GPO)
Advertisement
Prime Minister Benjamin Netanyahu and his Greek counterpart, Alexis Tsipras, sent a message to Ankara on Wednesday, saying the growing alliance between the two states, together with Cyprus, is not aimed against Turkey, with whom all three have tense ties.“Our cooperation with Greece and Cyprus stands on its own,” Netanyahu said at a joint press conference in Jerusalem with Tsipras. “We believe it is long overdue, and are very happy about the progress. It is independent of efforts to normalize relations with Turkey.”Netanyahu said that these efforts will continue, and “we have to ensure that Israeli interests are assured.”“Turkey and Israel had very good relations in former years,” Netanyahu said. “We did not want to see it deteriorate, and we did not cause this deterioration. If there is a change of policy, we will welcome it.”Netanyahu’s words came against a background of persistent reports that Turkey and Israel are on the verge or re-establishing full diplomatic ties, some six years after they broke down over the Mavi Marmara incident.According to diplomatic officials, Greece and Egypt – both Turkish rivals – have indicated concern about a warming of ties between Israel and Turkey.Tsipras, who will be meeting with Netanyahu again on Thursday – but this time in Nicosia along with Cypriot President Nicos Anastasiades – did his part to discount that notion.“This meeting does not go against anyone,” he said through a translator. “We are only looking for the benefit of us and the states in the region.”Tsipras said Thursday’s tripartite meeting, which is expected to focus on energy, security and tourism issues, is a positive sign of cooperation. “We are not against anyone, and would be happy if others joined,” he said.Late last year Tsipras and Anastasiades held a trilateral summit with Egyptian President Abdel Fatteh al-Sisi.Tsipras arrived in Jerusalem on Wednesday for the second time in two months, this time bringing six other ministers and a deputy minister for the second government- to-government meeting with Israeli ministers.Despite being the head of the radical-left Syriza Party, Tsipras has emerged as one of Israel’s staunchest supporters inside the EU, going to bat – along with Cyprus and a handful of eastern European countries last week – for Israel in watering down an EU resolution on the Middle East peace process.Netanyahu acknowledged this, saying he wanted to express appreciation for the “principled position” Greece has taken on Israel in international forums. “Greece is a true friend,” and this is a developing friendship that “can turn into a genuine alliance,” the premier said.Tsipras said that Greece is interested in “playing a constructive role” to promote negotiations between Israel and the Palestinians.Greece has traditionally had a close relationship with the Palestinians.Netanyahu, at the outset of the meeting that fell on International Holocaust Remembrance Day, noted the bravery and courage shown by 321 Greeks who have been recognized by Yad Vashem as Righteous Among the Nations for risking their lives, and that of their families, to save Jews during the Holocaust.Tsipras suggested that the next time Netanyahu is in Greece, they go together to Salonika to pay honor to the Greeks who helped save Jews.The six Greek ministers and their Israeli counterparts signed a number of bilateral agreements in the fields of tourism, public security, infrastructure development, road safety, water and the training of diplomats.