Guinea, formerly known as French Guinea, is a country of some 10.5 million people, 85% of whom are Muslim. 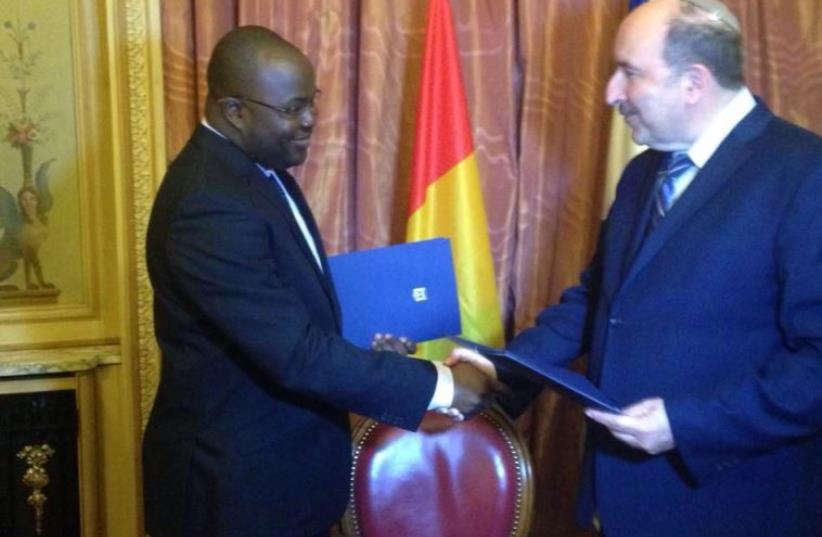 Foreign Ministry director-general Dore Gold and Ibrahim Khalil Kaba, the chief of staff for Guinean president Alpha Conde, sign declaration re-establishing ties in Paris.
(photo credit: Courtesy)
Advertisement
After a 49-year break, Israel and Guinea, a majority-Muslim country in West Africa, reestablished diplomatic ties on Wednesday.Foreign Ministry director-general Dore Gold and Ibrahim Khalil Kaba, the chief of staff of Guinean President Alpha Condé, signed the declaration in Paris reestablishing ties.The breakthrough comes after Prime Minister Benjamin Netanyahu spoke by phone with Condé during his recent visit to Africa. That conversation was facilitated by one of the leaders of the seven East African countries Netanyahu met with in Uganda on the first day of his visit to the continent on July 4.Netanyahu told reporters at the end of his visit, without identifying the leader he spoke with by phone, that they agreed to meet at a later date.On Wednesday, Netanyahu said he expected another country to follow suit.“This is part of a process that is gaining momentum and is very important,” Netanyahu said. “It opens Israel up to Africa, and it obviously helps us in other aspects.”Israel is hoping that the strengthening of ties with Africa will cut significantly into the automatic majority of countries that vote against it in international fora.Guinea, formerly known as French Guinea, is a country of some 10.5 million people, 85 percent of whom are Muslim. It is a member of the 57-member Organization of Islamic Cooperation.One diplomatic official said that Guinea, like many other countries in Africa, was concerned about Islamic terrorism, and learning from Israel’s expertise in this matter was a major reason for the decision to establish ties.Gold said the signing of the declaration was the closing of a circle, as Guinea was the first country in Africa to break off ties with Israel in 1967. Most of the rest of the continent, buckling under Arab pressure, severed ties after the Yom Kippur War in 1973, renewing them gradually since the mid-1980s.Gold said the number of sub-Saharan African countriesthat do not have diplomatic relations with Israel is getting smaller, and that Jerusalem hopes to establish diplomatic relations with them as well in the near future, “for the benefit of all the people in the region.”Israel does not have diplomatic relations with the following sub-Saharan predominantly Muslim states: Mali, Chad, Niger, Sudan, Somalia, Djibouti, Comoros and Mauritania.Israel had diplomatic relations with Mauritania from 1999 to 2009, and even had an embassy there, until Mauritania – a member of the Arab League – cut off ties following 2009’s Operation Cast Lead against Hamas in the Gaza Strip.Gold said Israel and Guinea had friendly relations even though they have not had diplomatic ties, and that Israel is proud of the part it played in the international efforts to eradicate the Ebola virus that hit Guinea hard and has killed more than 2,500 people there since 2013.Gold said Israel was interested now in intensively strengthening ties with the country, and was more than willing to assist Guinea in areas such as agriculture, water management and homeland security.According to Gold, the reestablishment of ties with Guinea comes as part of Netanyahu’s strategic goal of upgrading diplomatic, economic and security ties with Africa.The development comes just a few weeks before the expected visit in Jerusalem of Faure Gnassingbé, the president of Togo, another West African state.Netanyahu would like to convene a summit in West Africa in the near future, similar to the one he held two weeks ago in East Africa with leaders from Uganda, Kenya, Rwanda, Ethiopia, Tanzania, South Sudan and Zambia. Among the natural candidates to attend such a summit would be Togo, Benin, Côte d’Ivoire, Ghana, Gabon, Cameroon, and – now – Guinea.