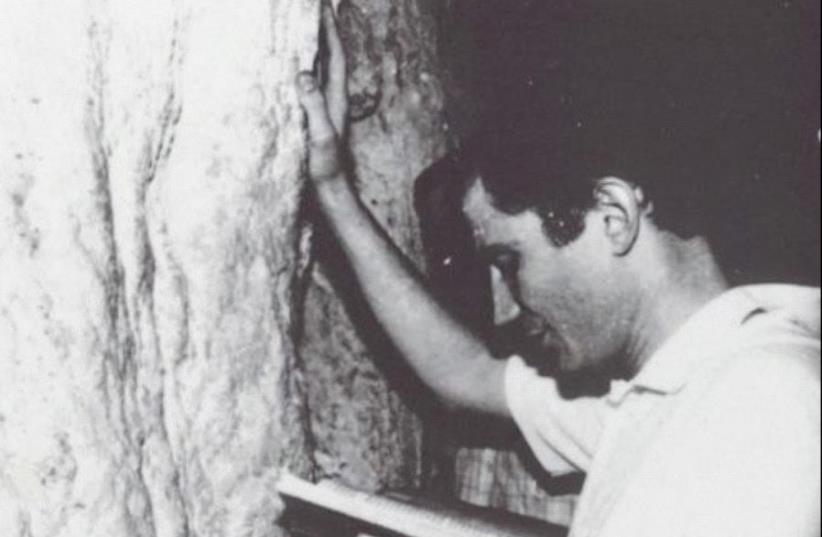 YULI EDELSTEIN prays at the Western Wall after his release from the Russian gulag in 1987
(photo credit: KNESSET SPEAKER YULI EDELSTEIN'S OFFICE)
Advertisement
Israel and Diaspora Jewry need to renew discussions about the egalitarian section of the Western Wall, Knesset Speaker Yuli Edelstein said in Moscow on Thursday.“I’m very worried by the fact that it’s been a tense week and that there is no dialogue,” he said.” I think that we all have to calm down and get back to the table and restart the discussions.”Edelstein said Israel “can’t afford” a situation in which Diaspora leadership won’t speak to Israeli leaders, and vice-versa and that there must be a “technical, political” solution to the matter.In comments directed toward the Orthodox community, he said that allowing others to pray as they wish is not the same as giving up.“We don’t have to compromise on our values, or on our Mitzvas, or on our way of life. That is something I wouldn’t be prepared to do for anything,” Edelstein said, noting how he was punished repeatedly for being religious in the Soviet Union. “People understand that I was not prepared to compromise under very difficult circumstances. But that is not what is being demanded.”“The Western Wall belongs to all the Jewish people and, you know what, in a wider sense, to the world too, to all the religions,” he said.Citing his own history, Edelstein pointed out that Conservative and Reform Jews played an active role in the struggle to free Soviet Jewry.When he went to the Western Wall for the first time after being released from a Soviet labor camp, the note he put in the Kotel’s cracks contained a wish that all Jews would be able to visit the Kotel.Meanwhile, President Reuven Rivlin has been inundated with requests to voice an opinion on the Western Wall argument. Does he believe that the Wall is sacred only to a certain segment of the Israeli population that believes in gender segregation, or does he go along with the American concept, the family that prays together stays together? It was understandable that both sides should turn to the president who has intensively advocated unity and equal opportunity among what he calls the four tribes of Israel – one of which is not Jewish.On Thursday afternoon, members of the president’s spokesmen’s team began telephoning media outlets to say that the president was releasing a statement.Anyone who thought that Rivlin was going to take sides was mistaken as the statement was totally noncommittal. In the introduction Rivlin – who on other occasions has described himself as “secular Orthodox” – reminisced how during the British Mandate period, he would accompany his father to the Wall at the conclusion of Yom Kippur to hear the blowing of the shofar. He described the diversity of the crowd without mentioning a separate women’s section, and the efforts made to protect the shofar blower from the Mandate police. This, for him, was symbolic of the eternal faith of the people.Fast forward 50 years to the reunification of Jerusalem and the return to the remnants of the Temple.“In those moments it was clear to all of us that the hope of the Jewish people had been realized, and since then we have all been involved in reconstructing our homeland,” Rivlin said.