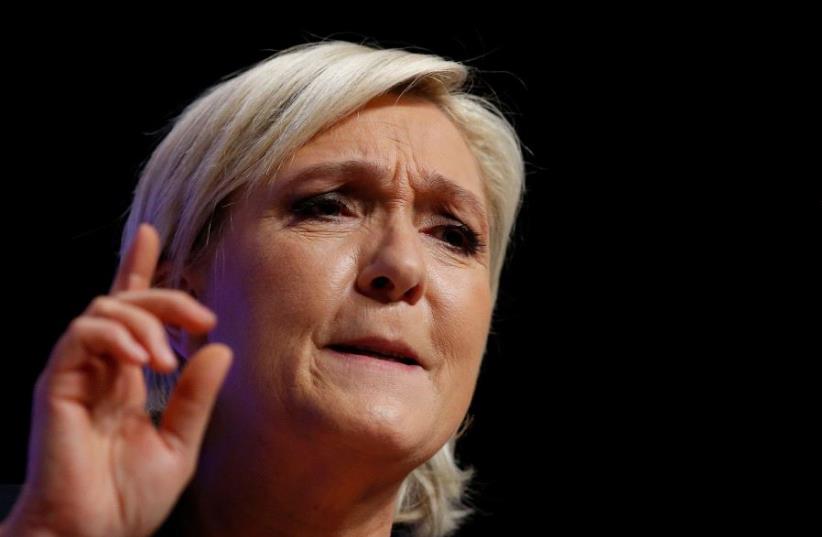 Marine Le Pen
(photo credit: REUTERS)
Advertisement
The Foreign Ministry on Monday condemned a statement by far-right French presidential candidate Marine Le Pen, who said that France was not responsible for deporting its Jews during the Holocaust.“This declaration is contrary to historical truth,” the Foreign Ministry said, adding that “French presidents have recognized the state’s responsibility for the fate of the Jews who perished in the Holocaust.“This recognition is the basis for remembrance day events that mark the anniversary of the Jewish expulsion from France as well as the study of the Holocaust in its education system,” the Foreign Ministry said.These are “important elements in the struggle against anti-Semitism, which unfortunately still raises its head today,” the Foreign Ministry said.
French far-right"s Le Pen refuses to wear headscarf to meet Lebanon"s Grand Mufti (credit: REUTERS)
The French government has previously apologized for the role French authorities played in the round-up of 13,000 Jews at the Vel d’Hiv cycling track in 1942 at the behest of Nazi officers. The majority of those Jews would later meet their demise at Nazi death camps spread across Europe.Le Pen is, according to recent polls, one of the two leading candidates ahead of the first round of the elections on April 23.During an interview Sunday, she was asked about the roundup and deportation of 13,152 from the Vel d’Hiv stadium in Paris, which the Yad Vashem Holocaust museum in Jerusalem defines on its website as “a symbol of the responsibility of the regime and the French nation for the Holocaust.”Responding to a question on the subject during the interview in Paris for the RTL network and Le Figaro, Le Pen, who has a 24-percent approval rating according to a poll published Monday, said: ”I think France is not responsible for Vel d’Hiv.”She added, “I think generally, and in very general terms indeed, if anyone is responsible, then it is those in power at the time, not France as such. It wasn’t France.”In 1995, then president Jaques Chirac said France has a role in and responsibility for the deportations, which were carried out by French police officers during the country’s occupation by Nazi Germany.Francis Kalifat, president of the CRIF umbrella group of French Jewish communities, on Sunday condemned Le Pen’s remark as “revisionist,” meaning an attempt to deny the Holocaust. “It unmasks the true face of National Front,” Kalifat wrote on Twitter in reference to Le Pen’s party. “It must be blocked during the elections,” he added.Since its establishment by Jean-Marie Le Pen, Marine Le Pen’s father and the owner of multiple convictions for Holocaust denial and incitement to hatred against Jews, National Front has been accused of espousing anti-Semitism, hatred of Muslims and other forms of xenophobia.Under Marine Le Pen, the party has softened its image, including by kicking out antisemitic members like Jean-Marie Le Pen, who was excluded from the party in 2015. Marine Le Pen has wooed Jewish voters, promising to be their “shield” against radical Islam. In this framework, she said French Jews should be banned from wearing kippahs in some public spheres to preserve equality and facilitate further bans on wearing Muslim religious clothing. She asked French Jews make this “sacrifice.”