Deputy FM Hotovely meets with German FM; Steinmeier is set to meet with Netanyahu and Rivlin later on Sunday. 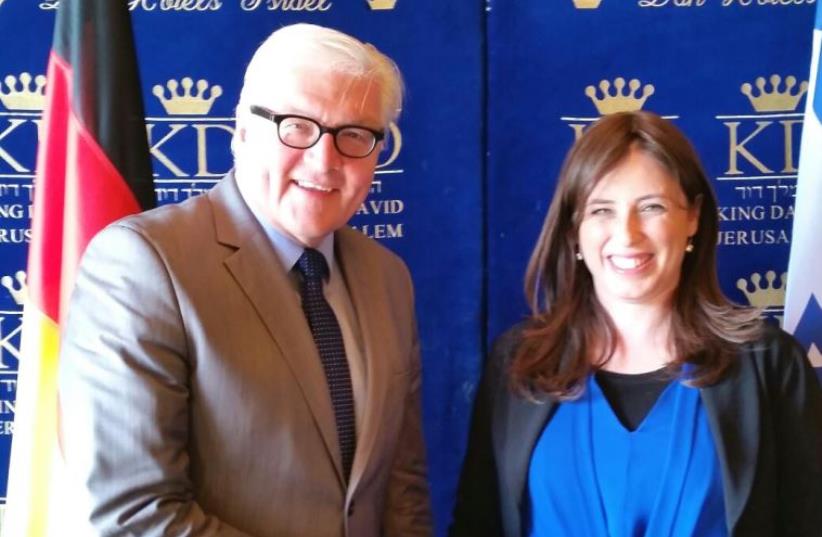 German FM Frank-Walter Steinmeier and Deputy FM Tzipi Hotovely‏
(photo credit: DANA SOMBERG)
Advertisement
Deputy Foreign Minister Tzipi Hotovely told visiting German Foreign Minister Frank-Walter Steinmeier on Sunday that Israel expects Germany to lead the fight against the labeling of products manufactured in the West Bank.   "Boycotting goods harms the entire fabric of life in Judea and Samaria, both for the Israelis and the Palestinians," Hotovely said.  Israel has been critical of any move to label produce from Jewish settlements clearly or distinguish them from goods produced by Palestinians, arguing that the distinction is part of a larger effort to impose a Palestinian state on Israel. Hotovely said that Israel faces a front of boycotts originating from Europe. The newly-minted deputy foreign minister said she appreciated Germany's firm stance against Iran becoming a threshold nuclear power. She also said Israel appreciates Germany's "uncompromising position" against the rising anti-Semitism in Europe.Steinmeier is set to meet with Prime Minister Benjamin Netanyahu and with President Reuven Rivlin later on Sunday. On Saturday, Zionist Union leader Isaac Herzog met Steinmeier and thanked him for his country’s support in the wake of recent threats to suspend Israel from FIFA. The opposition leader hosted the German official at his home.Herzog praised Germany for “standing firm beside the Jewish state” as it battled complaints raised by Palestinian authorities with soccer’s governing body, a press release said. He urged the European country to continue to be a “clear and stable voice” against a trend of unilateral steps against Israel.“The only way to reach a lasting agreement is through direct negotiations between Israel and the Palestinians,” Herzog said at the meeting, which was also attended by Zionist Union MK Tzipi Livni. “Unilateral action badly destroys the chance to get there.”Reuters contributed to this report.