'Israel is not the United Nations' punching bag anymore' 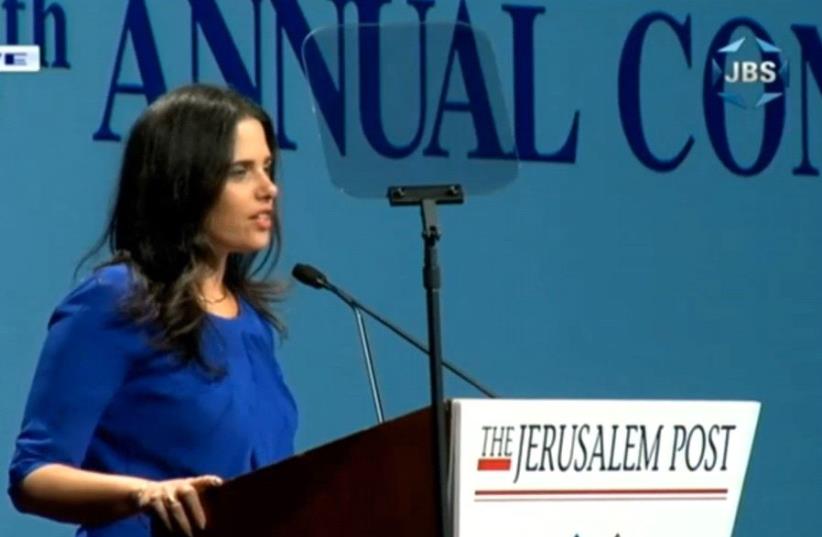 Ayelet Shaked at the 2017 JPost Annual Conference
(photo credit: screenshot)
Advertisement
Still fuming about UN Resolution 2334, which passed in December just before Donald Trump became US president, Justice Minister Ayelet Shaked told attendees at The Jerusalem Post Annual Conference in New York on Sunday that Israel has a partner in the Trump administration in fighting all illegal UN resolutions.“Israel is not the United Nations’ punching bag anymore,” she said, calling Resolution 2334, which declared the settlements, including the “settlement blocs” illegal, “nothing more than antisemitism and delegitimization of Israel.”“We reject UN Resolution 2334. We reject it on legal, moral and ethical grounds!” Shaked said, detailing her belief that the situation at the UN has changed.“We can see the change with Nikki Haley as the US ambassador to the United Nations… Israelis finally feel that we have someone leading the fight for justice and morality in a place without it. We feel like our voice will finally be heard in the halls of the General Assembly.She has given us hope, and we look forward to seeing her continue on the path she started.”Transitioning to the arena of peace negotiations, Shaked said: “I was personally encouraged that the Trump administration did not automatically adopt the two-state solution narrative from previous administrations,” noting that it is open to creative approaches.“They did something unique: They listened to some of the things we have been saying for years and said we need to work it out in our own way.”Asserting that her party, Bayit Yehudi has, the answer, Shaked advocated immediate annexation of Area C and granting citizenship to the residents there.“We want to establish a confederation in areas A and B, possibly with Jordan, a country that coincidentally has a population that is 70% Palestinian,” she said.Shaked said she believes the administration “will continue to positively surprise us,” specifically regarding moving the US Embassy from Tel Aviv to Jerusalem.“President Trump doesn’t need to do anything,” she said. “On June 1, if he doesn’t sign a waiver, the embassy will need to move to Jerusalem according to the American law.”Shaked also expressed hope that Trump will recognize Israeli sovereignty over the Golan Heights and alluded to what she called a worldwide legal campaign against Israel.“The new battlefield is also in the courts,” she said, noting that Israel has successfully fought back against lawsuits against Israelis in foreign courts and efforts to use “universal jurisdiction in a very cynical and political way against our leadership.“These frivolous complaints have all been thrown out… The United Kingdom, Spain and Belgium have amended their domestic laws to prevent this kind of legal abuse,” she said.Shaked warned: “Make no mistake, the effort by our enemies is not about reaching peace with the Palestinians.This effort is about destroying the State of Israel as a Jewish State. It’s that simple.”The justice minister told attendees she would meet with US Attorney-General Jeff Sessions later in the week and expressed hope that he would “continue the fight he began in the Senate against the nuclear-arms deal with Iran, [because] it remains an existential threat to the State of Israel and must be stopped.”Finally, Shaked listed a series of accomplishments that might surprise many who paint her in purely right-wing political terms.“I studied the issues and found out that there was no courthouse in an Arab town or village,” she said. “This is unacceptable. I am proud to say we are going to build the first official, permanent courthouse in an Arab town, in Taiba.“I also made some waves recently by appointing the first ever, female Arab judge for the Israeli Shari’a court system.”