"We are opposed to a militarized nuclear program in Iran," Netanyahu said during a trip to Florence. 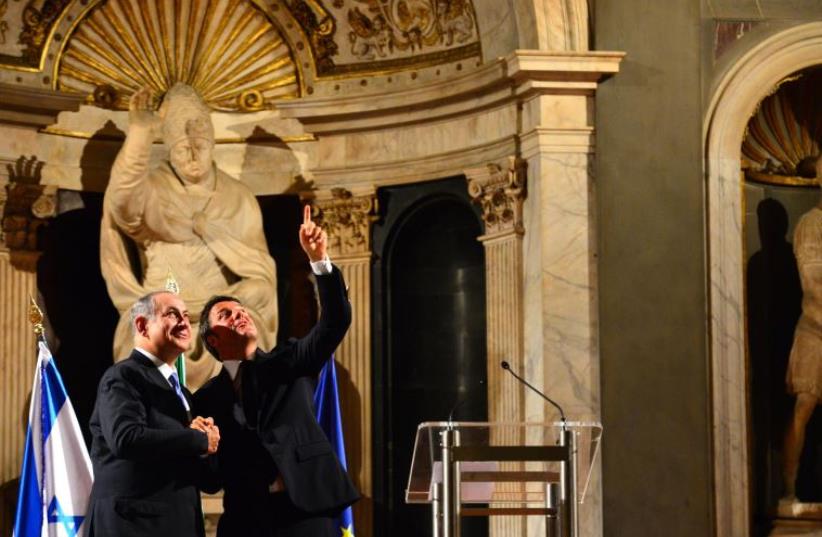 Prime Minister Benjamin Netanyahu (L) and Italian Prime Minister Matteo Renzi in Florence
(photo credit: KOBI GIDEON/GPO)
Advertisement
Israel is not opposed to an Iranian nuclear program that is civilian in nature, Prime Minister Benjamin Netanyahu told his Italian counterpart, Matteo Renzi, during a visit to Florence on Saturday.The remark could be interpreted as a rebuttal to US President Barack Obama's contention on Friday that opponents of the Iran nuclear deal were opposed to the Islamic Republic's retaining of any nuclear capability - even for peaceful purposes."Allow me to make clear that Israel is not opposed to a civilian nuclear program in Iran," Netanyahu said. "We are opposed to a militarized nuclear program in Iran.""Unfortunately, the deal with Iran enables it to preserve - and even to expand - its vast nuclear infrastructure which is completely unnecessary for a civilian nuclear program but is vital to manufacturing nuclear weapons," the prime minister said.Netanyahu said that the Joint Comprehensive Plan of Action will permit the Iranians to gain possession of centrifuges that will enable them to "enrich as much uranium as they wish at whichever level they wish" within 13 years."This will bring the Islamic state of Iran, which is engaging in global terrorism, to the threshold of an entire nuclear arsenal," the prime minister said.In a special webcast geared toward the American Jewish community, Obama said the agreement puts permanent restrictions on Iran ever acquiring nuclear weapons. On this concern, the president said that “in 15 years, if what the critics say is true,” his successors will have the support of the international community to respond.And in the meantime, “nothing in this agreement prevents us from continuing to push back forcefully against terrorist activity,” he said. “We aren’t normalizing relations with Iran here.”Obama characterized the deal as a 15-year “penalty box” for Tehran’s past behavior, which then eases to allow the Iranians to “open up their peaceful nuclear program.“In the best of all worlds, Iran would have no nuclear infrastructure whatsoever,” he continued. But he said international powers did not think Iran could reasonably be denied the ability to enrich uranium, one of the two main paths to obtaining weapons-grade fissile material.“After 10 years, they are able to obtain some additional advanced centrifuges,” he said, but added that they still will be “carefully monitored.” Michael Wilner contributed to this report.