Move is a reaction to a number of news clippings and stories with headlines that seemed to paint Palestinian terrorists in a more sympathetic light. 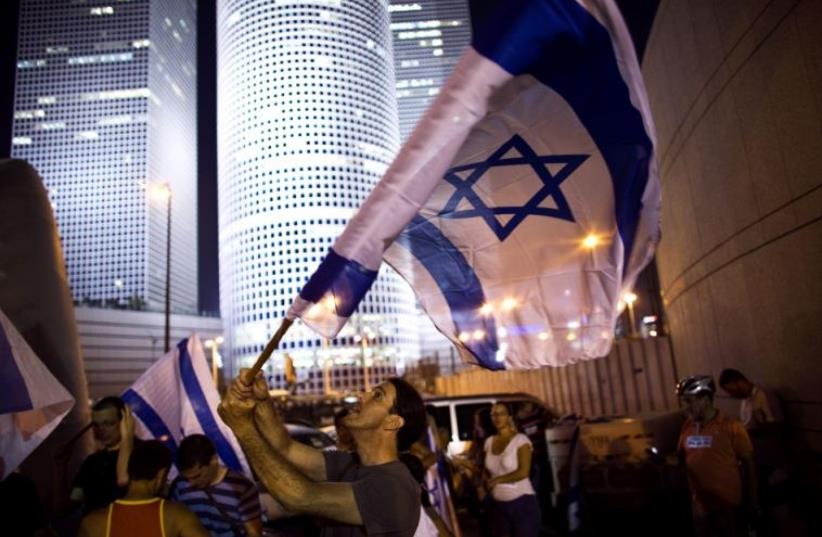 Israelis demonstrate in support of the 2014 war in Gaza
(photo credit: REUTERS)
Advertisement
The Israeli government official responsible for accrediting foreign journalists said on Wednesday that he will consider revoking press credentials for media members who “are derelict in doing their jobs and write headlines that are the opposite of what happened.”Nitzan Chen, the head of the Government Press Office, wrote an angry post on his Facebook page on Wednesday in reaction to a number of news clippings and stories with headlines that seemed to paint Palestinian terrorists in a more sympathetic light.Western news agencies wrote stories about Wednesday’s attack in Jerusalem, where three armed Palestinians killed a Border Policewoman and wounded two others.

The Foreign Ministry moved swiftly on Wednesday to change what it termed a “horrible headline” the American CBS news outlet put on its story about the terrorist attack at Jerusalem’s Damascus Gate.At about 4 p.m. the network’s website put the following headline on a story about the attack: “3 Palestinians killed as daily violence grinds on.” About 90 minutes later it was changed to this: “Israeli police kill 3 alleged Palestinian attackers.”Foreign Ministry spokesman Emmanuel Nachshon said the original headline was “biased and dishonest,” and an example of “unparalleled chutzpah.”The ministry, the Government Press Office and the National Information Directorate all worked to get the headline changed, he said.The new headline, he said, “was not ideal, but better.”The headline was later changed a third time, reading: “Palestinians kill Israeli officer, wound another before being killed.”This is not the first time that the Foreign Ministry has protested headlines in the foreign media following terror attacks. In November 2014, CNN apologized for mistakes in its coverage of a terror attack on a synagogue in Jerusalem.CNN ran a ticker that read, “4 Israelis, 2 Palestinians dead in Jerusalem," failing to note that the two Palestinians were the terrorists. Later, CNN apologized for the headline, writing: “As CNN updated its reporting on the terrorist attack on the synagogue in Jerusalem earlier today, our coverage did not immediately reflect the fact that the two Palestinians killed were the attackers.  We erred and regret the mistake.”After the CNN incident, the Foreign Ministry issued a directive to its delegations around the world calling on them to immediately protest to media outlets distorting reports about the attack. Nachshon at the time said that from Israel's perspective, “tendentious reports and lies are meant to distort the reality, to defame Israel and in practice (if not always by intent) give a back-wind to terror.”