Israel to UNHRC: ‘You’ve never cared for us, how do you expect us to take you seriously?'

Envoy to UNHRC Eviatar Manor charges that the body “needs a moral compass” and that it “does not and will not contribute to peace in our region.” 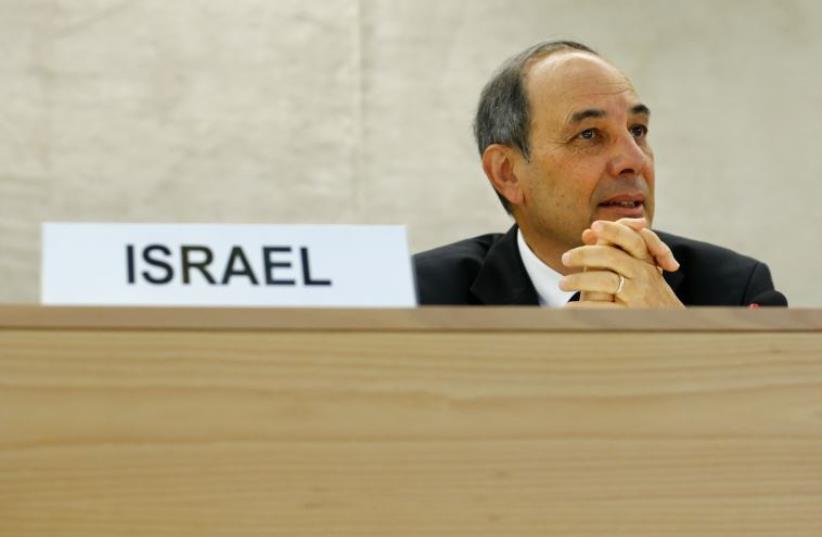 Israel's Ambassador to the UN in Geneva Eviatar Manor
(photo credit: REUTERS)
Advertisement
In a short, but highly charged speech, Israel’s ambassador to the United Nations in Geneva Eviatar Manor accused the United Nations Human Rights council in Geneva of overly focusing on Israel’s actions against the Palestinians at the expense of other more serious human rights situations in the Middle East.“You have an obsessive, compulsive disorder regarding Israel,” Manor said Tuesday, on the second day of the council’s 32nd session.“Politicized debates, biased resolutions, preposterous reports, discriminatory conduct and unfounded accusations characterize the attitude of this Council and of the Office of the High Commissioner of Human Rights towards Israel,” Manor said.The Israeli ambassador took particular issue with a UNHRC mandate that alleged Israeli human rights violations must be addressed at every session under Agenda Item 7. Israel is the only country that is singled out in this way; all other human rights issues around the world are addressed under Agenda Item 4.“This Council’s priorities are wide off the mark,” said Manor.How is it, that there is “an agenda item specifically dedicated to my country when the tragedies of Syria, Yemen, Iraq, Libya, to name but a few, are unfolding and producing a tsunami of refugees about to engulf Europe?” Manor said.“And you expect us to take you seriously?” he asked.Manor also took issue with a statement the High Commissioner for Human Rights Zeid Ra’ad Al Hussein released after last week’s Tel Aviv terrorist attack in which two Palestinian gunmen killed four Israelis and injured dozens of others.Hussein charged that Israel’s retaliatory decision to cancel 83,000 travel permits granted to Palestinians in the West Bank and Gaza to join their families in Israel for the month of Ramadan, was an act of “collective punishment.”Manor said all sovereign states have the right to regulate the entry of non-citizens into their country, and that “the terms of existing bilateral Israeli-Palestinian agreements specifically affirm Israel’s right to prevent or limit entry of persons into Israel from the West Bank and Gaza for security and safety considerations.”He ended with a few lines of attack against the council, charging that it “has never cared for the human rights of Israelis;” that the UNHRC “needs a moral compass;” and that it “does not and will not contribute to peace in our region.”He urged the UNHRC members to consider his words.“Think about it, and call me if you change your minds.You can find me at +972 -77- 430-4703,” Manor said.But his Jordanian counterpart Saja Majali slammed Israel for what she called its continued human rights violations and spoke of the importance of the creation of a two-state solution on the pre-1967 lines with east Jerusalem as its capital.“Israel must dismantle settlements [and] stop restrictions on movement and house demolitions and administrative detentions,” Majali said.She called on Israel to allow freedom of worship, stop Israeli extremists from vandalizing Muslim mosques and halt archeological excavations in the area of the Temple Mount, which she referred to Al-Haram/Al-Sharif.The two-year deadlock in the Israeli-Palestinian peace process “will only fuel more extremism and threaten regional and global security,” she said.“Accordingly, Jordan supports all diplomatic efforts to realize a two-state solution and revive the Palestinian-Israeli peace talks based on clear time-bound negotiations that lead to the establishment of an independent Palestinian state on the ’67 lines,” Majali said.