The Turkish parliament was scheduled to deal with its part of the arrangement this week, and one unanswered question now is whether this will take place as scheduled. 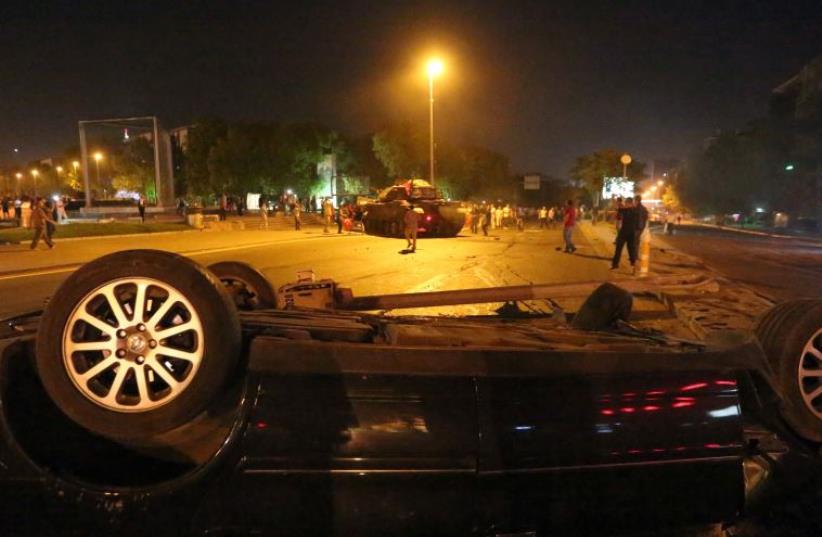 A damaged vehicle is seen in front of a military vehicle during an attempted coup in Ankara, Turkey July 16, 2016.
(photo credit: REUTERS)
Advertisement
Like the rest of the world, Israel watched stunned and with great concern as the dramatic events unfolded Friday Night and Saturday in Turkey.Like the rest of the world, Jerusalem wondered what impact the mutiny would have on a Middle East already in the throes of a fundamental re-configuration.Like the rest of the world, Jerusalem wondered how the aftermath of the weekend’s events – surely to be tumultuous – will play out on issues such as the West’s battle against Islamic State.But Jerusalem also had an additional concern: What impact would the events have on the reconciliation deal reached last month between Ankara and Jerusalem after years of negotiations? The Foreign Ministry issued a statement on Shabbat – something that it rarely does – that read: “Israel respects the democratic process in Turkey and looks forward to the continuation of the reconciliation process between Turkey and Israel.”And that statement sums up Israel’s position succinctly: this is a domestic Turkish issue, and however the process plays out, Jerusalem’s hope is that the countries can go back to having normal relations – because it is in the interest of both countries to do so.It is much too early to predict exactly how everything will now play out inside Turkey, but the working assumption behind Israel’s statement is that if President Recep Tayyip Erdogan retains power – as seems to be the case – then in the immediate term he will want to create the impression that everything is under control, and that it is “business as usual.”One of the points of business that is supposed to be moving forward in the coming days is the deal with Israel.Under the terms of the reconciliation agreement, there is a progression.First the agreement was announced, then the security cabinet approved it, then each country signed a copy, then that copy was taken to the other country, then it is to be ratified by the Turkish Parliament which is also to pass laws that will make it impossible to bring legal cases against Israeli soldiers and officers, then ambassadors were to be named and diplomatic relations normalized.The Turkish parliament was scheduled to deal with its part of the arrangement this week, and one unanswered question now is whether this will take place as scheduled.While holding this debate as scheduled would send a strong signal that government life has returned to normal, diplomatic officials in Jerusalem would not fall off their chairs if they were notified in the coming days that the parliament debate might be delayed. It is also something that Jerusalem, considering the circumstances, would understand.Turkey’s interest in rapprochement with Israel have not changed as a result of the attempted coup: Ankara will still want to improve its diplomatic position in the region; it will still want to cooperate with Israel on security and intelligence matters as much as possible; and it will still want to send supplies to Gaza and build a desalination plant and hospital there.Israel’s interest in the accord have also not changed: Jerusalem still wants an open dialogue with Ankara on matters of critical interest regarding what is happening in Syria; it still wants to put an end to Turkish efforts to thwart Israeli inroads in international forums, such as NATO; and it still wants to be able to export gas to Europe through Turkey.None of that has changed. The developments that took place inside Turkey were divorced from Turkey’s foreign policy, and have to do with fundamental domestic Turkish issues.The question now is what type of Turkey will emerge. But whatever materializes, Israel’s position will remain the same: it wants normalized relations with one of the largest, most significant countries in the region.