Danon held a press conference just before the UN Security Council’s emergency meeting on the situation in the Middle East.

By DANIELLE ZIRI, TOVAH LAZAROFF
OCTOBER 16, 2015 18:58
Israel's envoy to the UN, Danny Danon, speaks to reporters
Advertisement
Israel will never agree to the stationing of international forces on Temple Mount, Jerusalem's new envoy to the United Nations, Danny Danon, said on Friday.“If you are serious about promoting peace, if you are really committed to advancing co-existence in our region, make a clear statement against the incitement that fuels terror, support direct negotiations,” Danon said on Friday, addressing the international community and the UN Security Council. Danon held a press conference just before the council’s emergency meeting on the situation in the Middle East, which has seen an escalation in violence. “When a Palestinian child opens the television he doesn’t see Barney or Donald Duck, he sees murderers portrayed as heroes,” he said. “When he opens a textbook to do his homework, he doesn't learn about math and science, he is being taught to hate.” Danon showed journalists a drawing entitled “How to stab a Jew” as “an example to the kind of texts that Palestinian children are being exposed to.” 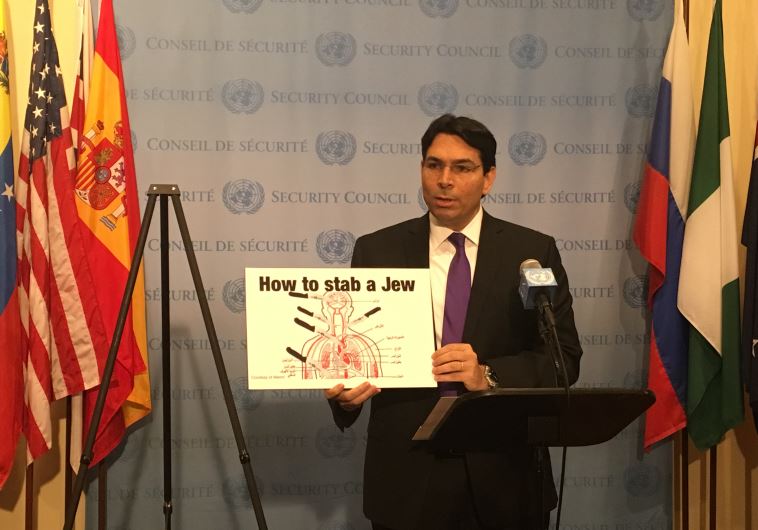 Danny Danon, Israel's new ambassador to the UN, addresses the media at UN headquarters in New York. (Courtesy)“We talk a lot about incitement here in the UN,” he said. “You can see with this picture what incitement looks like.” “Whoever avoids direct negociations is looking for an escape hatch,” the ambassador added. “Abbas’ favorite kind of escape is to spread slanderous lies about the situation on Temple Mount, especially about the status quo.”Danon also made clear that Israel will not agree to any international presence on Temple Mount since “any such intervention would violate the decades long status quo”, which Prime Minister Benjamin Netanyahu had repeatedly committed to maintaining. Danon, who only begun his term at the UN on Monday, chose not to participate in the Security Council meeting and was instead represented by his deputy, David Roet, who conveyed the same message to members of the council. “We face an enemy who is willing to die in order to kill,” Roet said. “Israel is taking every necessary means to defend its citizens and is responding proportionately to these attacks.”“I have no doubt that if people were being stabbed in the streets of your countries with butcher knives on a daily basis, or shot on buses, your security forces would have reacted in the same way,” he added. The Palestinian repsesentative at the UN, Riyad Mansour, also spoke at the meeting and asked the Security Council to “intervene to end this aggression against the defenseless Palestinian people.”“Israel, the occupying power, is responsible for bringing us to this dangerous situation and we have to hold it responsible for its illegal violations of international law,” he said, citing Israel settlers’ “provocations” on Temple Mount. “We believe that this terror and aggression will not weaken our determination to fight against the occupation peacefully and achieve our soverign state with east Jerusalem as its capital,” Mansour added. The Palestinian ambassador also expressed appreciation and respect for the “martyrs” and for “those who have been injured.”Danon's remarks dovetail with Israeli warnings that Jerusalem’s holy sites would be set ablaze if they were placed under the control of the Palestinian Authority.The government in Jerusalem issued its statement hours after hundreds of Palestinian rioters had set fire to sections of the Joseph Tomb’s compound, located in the West Bank Palestinian city of Nablus.“The fire illustrates what would happen to Jerusalem’s holy places if they were in the hands of the Palestinian Authority," Foreign Ministry Director-General Dore Gold said. "Only Israel can protect the places that are holy to all religions in Jerusalem.”“The attack is reminiscent of the action of Islamist extremists in Afghanistan and Libya,” Gold said.Gold was referring to events in 2001, when the Taliban, the Islamist movement that ruled Afghanistan, oversaw the destruction of Buddhist shrines and statues as well as landmarks declared as UNESCO heritage sites.The blaze was set hours after Prime Minister Benjamin Netanyahu spoke at a Jerusalem press conference during which he accused Palestinian Authority President Mahmoud Abbas of inciting Palestinian violence against Israelis by falsely charging that it was harming the al-Aksa mosque compound on the Temple Mount, which is the third holiest site in Islam.The Temple Mount and the city of Jerusalem is one of the major points of contention between Israelis and Palestinians, who want the eastern part of the city, including the Old City, to be the capital of its future state.Israel believes that the entire city should be united under its sovereignty, save for the Temple Mount, which is already under the custodianship of the Islamic Wakf and Jordan.On Friday, Israeli politicians and diplomats linked Joseph’s Tomb with the situation in Jerusalem as they warned that only Israel could protect freedom of religion at holy sites in the capital.Yisrael Beytenu party head Avigdor Liberman held the PA responsible for the flames at Joseph’s Tomb and said it showed that the PA’s “occupation is no different than that of Islamic State.”Deputy Foreign Minister Tzipi Hotovely (Likud) said the arson attack showed that Palestinian anger at Israel had nothing to do with Israeli control of areas over the pre-1967 lines since Joseph’s Tomb is located in a city under PA control.“The tomb is not under Israeli sovereignty, and in spite of that, the Palestinian set it on fire. They are trying to rewrite history by harming Jewish holy places that bear testament to our deep connection to the Land of Israel,” Hotovely said.The tomb is located near what was once the Biblical city of Shechem and has a history of Jewish, Christian and Muslim worship. It is fully under the control of the Palestinian Authority. Jewish worship has been severely limited at the tomb since the start of the second intifada in October 2000, after an Israeli border policeman was killed there during clashes with Palestinians.Under the Olso Accords, Jews were allowed regular access to the site and a yeshiva was located there.Now Jewish worshipers can access the tomb only once a month in the middle of the night, when the IDF secures the roads in the city that lead to the tomb.Pictures of flames jutting out from the Tomb were published by the Samaria Regional Council on Friday morning.The fire was brought under control by Palestinian police before IDF forces could arrive on the scene. Portions of the religious site were severely damaged in the fire. There were no reports of injuries.Settlers and right wing politicians reacted to the arson attack by calling for the tomb to be placed under Israeli control, in spite of its location on the edge of Nablus.“Once again its been proven that there is no alternative to Israeli sovereignty when it comes to preserving Jewish holy sites,” said Avi Ro’eh, who heads the Council of Jewish communities of Judea and Samaria. He called on the government to allow Jewish worshipers regular access to the site.On Friday afternoon, Abbas condemned the arson attack and called for an official committee of inquiry into the matter.