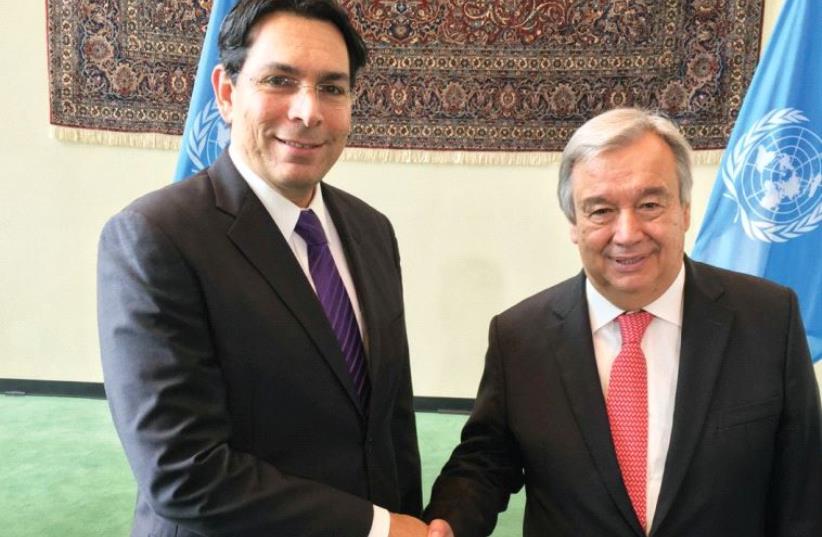 AMBASSADOR DANNY DANON shakes hands with incoming UN Secretary-General Antonio Guterres in New York yesterday
(photo credit: ISRAEL MISSION TO THE UN)
Advertisement
Former Portuguese prime minister Antonio Guterres took over from Ban Ki-moon on Sunday as the UN’s new secretary-general, and Israel has one request: Just be fair.“I met with him and was impressed with his wide knowledge of the UN and the international arena,” Israel’s Ambassador to the UN Danny Danon told The Jerusalem Post. “I hope we can turn a new page with him.”Danon acknowledged that Guterres has a difficult job when it comes to Israel and the Middle East.
UN selection of Antonio Guterres for secretary general
“I told him that the UN system creates so much negative energy against Israel, we just want him to be objective – not for Israel, but objective – and able to withstand the tremendous pressure against Israel that exists inside the UN.”Danon’s comments came even before the anti-settlement resolution in the Security Council some 10 days ago. He said that – from Jerusalem’s standpoint – what is needed at the UN is for leadership willing to stand up against the pervasively negative forces toward Israel in the organization.Ban, he said, “did not do that enough.”Guterres took over his position, which has a five-year term, with a message Sunday to make 2017 a year of peace.“On this New Year’s Day, I ask all of you to join me in making one shared New Year’s resolution: Let us resolve to put peace first,” he said, adding that the question foremost in his mind is: “How can we help the millions of people caught up in conflict, suffering massively in wars with no end in sight?” Guterres, 67, served as Portugal’s prime minister from 1995 to 2002, and as UN High Commissioner for Refugees from 2005 to 2015.Upon his appointment in October, a number of Israeli officials who have worked with the former head of the Portuguese Socialist Party, said that he has always been a friend of Israel, though – like most Europeans on the Left – is critical of the settlements.He first came to Israel in 1993 as the head of Portugal’s opposition, and met with then then-foreign minister Shimon Peres and Micha Harish, who at the time was the minister of industry and trade.He stayed in close contact with Peres and former prime minister Ehud Barak, who knew him from the Socialist International.Barak, in an Army Radio Interview when Guterres was appointed, said the new UN chief had in the past helped Israel in the European Union and the Socialist International. “I am sure he will be fair,” Barak said. “His views are closer to those of Amos Oz than [Prime Minister Benjamin] Netanyahu.His stances reflect those of the world.”Harish told the Post in October that Guterres “was friendly and was definitely not part of the extreme Left in Europe. I don’t remember any anti-Israel comments by him. I think he will be more fair and less aggressive in the UN than his predecessors.”Guterres was not the only change in the UN that took effect on Sunday; the composition of the Security Council changed, with five rotating members finishing their two-year term and five new countries taking their place.Of the five countries that exited were three of the four that sponsored the anti-settlement resolution last month: Venezuela, Malaysia, and New Zealand. The fourth sponsor, Senegal, will remain on the council for another year.Israel’s position on the Security Council will improve slightly, with Kazakhstan – a country with which Israel has strong ties, and to where Prime Minister Benjamin Netanyahu traveled last month – replacing Malaysia, with which Israel has no diplomatic ties.More good news for Israel is that Ethiopia – one of its closest friends in Africa – will replace Angola, and that Spain will be replaced for one year by Italy, and the other year by The Netherlands, two European Union countries whose voting record on Israel in international forums is better than Spain’s.Venezuela, with whom Israel has no diplomatic ties, will be replaced by Bolivia, which is nearly as anti-Israel as Venezuela and which also does not have diplomatic ties with Israel. And New Zealand – which disappointed Jerusalem tremendously with its sponsorship of the anti-settlement resolution – will be replaced by Sweden, which is arguably the most critical country of Israel in the European Union, and which this month will hold the Security Council’s rotating presidency.Gil Hoffman contributed to this report.