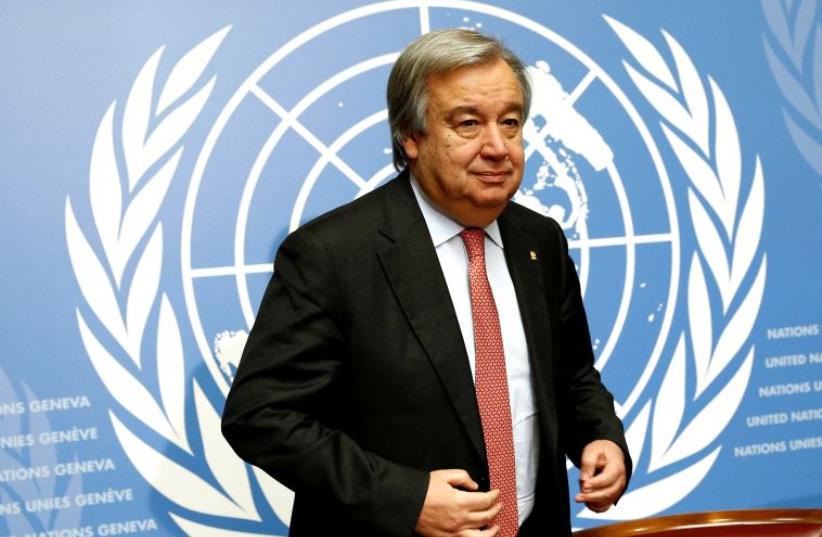 Antonio Guterres
(photo credit: DENIS BALIBOUSE/REUTERS)
Advertisement
Incoming United Nations Secretary-General Antonio Guterres has been and will always be a friend of Israel, former Israeli officials who have met with him told The Jerusalem Post on Thursday.Guterres came to Israel in 1993 as secretary-general of the Portuguese Socialist Party and leader of Portugal’s opposition.He met with then-foreign minister Shimon Peres and then-industry and trade minister Micha Harish.Following the visit, Guterres remained in close contact with Peres and former prime minister Ehud Barak, who both served under him in top posts in the Socialist International. Peres and Barak paid official visits to him in Portugal during their respective terms as prime minister, while he served as Portuguese prime minister.“He was friendly and was definitely not part of the extreme Left in Europe,” Harish said. “I don’t remember any anti-Israel comments by him. I think he will be more fair and less aggressive in the UN than his predecessors.”Barak visited him in New York on September 20 and told Guterres that he believed he would be the next UN secretary- general, well before the world was talking about him.Barak posted a picture of himself with Guterres on Twitter, boasting 20 years of friendship with him.In an Army Radio interview on Thursday morning, Barak said he shared a common language with Guterres, because they both studied physics. Barak said Guterres helped Israel in the European Union and the Socialist International.“I am sure he will be fair,” Barak said. “His views are closer to those of [Israeli writer] Amos Oz than [Prime Minister Benjamin] Netanyahu. His stances reflect those of the world. The world’s view of Israel is that it hopes to see a different Israel. If the government would act differently, it could change how Israel is seen.” Barak said Israel’s ties with Guterres were built by its ambassador in Portugal and later Labor MK Colette Avital. It was Avital who persuaded Guterres to visit Israel.Guterres’s interpreter when he came, Avraham “Moshka” Hatzamri, was one of the heads of the Labor Party’s international department at the time. Hatzamri, who was raised in Brazil, headed many Israeli delegations to Portugal and hosted many Portuguese Socialist Party delegations in Israel.Hatzamri said he took Guterres to the Western Wall, the Yad Vashem Holocaust Museum, and kibbutzim in the Galilee.He said Guterres had a good sense of humor and always spoke favorably of the Jewish state.“He proved to be a true friend of Israel, and we always received his support on the Middle East Committee of the Socialist International,” Hatzamri wrote in his memoirs.