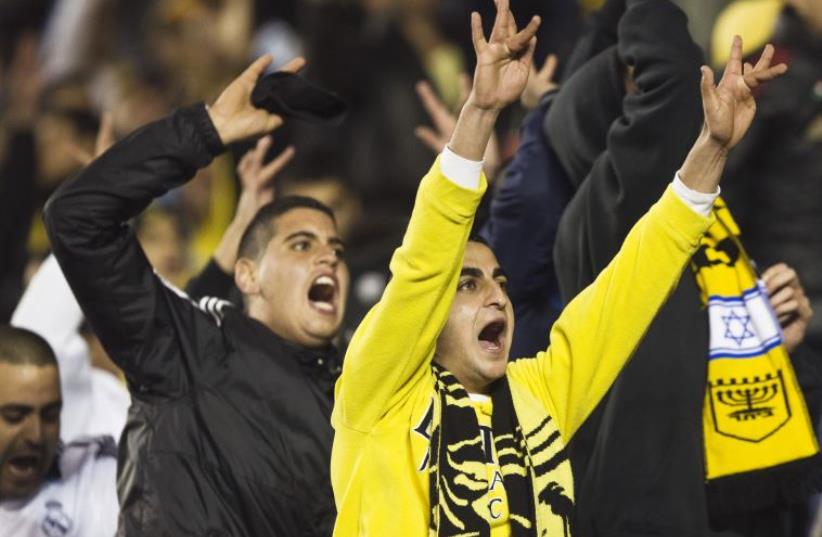 Fans of Beitar Jerusalem shout slogans during a match against Bnei Sakhnin as part of the Israeli Premier League
(photo credit: REUTERS)
Advertisement
Prime Minister Benjamin Netanyahu and Public Security Minister Gilad Erdan on Friday agreed to work on finding ways to prosecute Beitar FC fans who took part in hooliganism during the club’s match against Sporting Charleroi in Belgium Thursday.Netanyahu on Friday condemned "a small group of Beitar Jerusalem fans" who "besmirched an entire fan base and harmed the country's image".On Friday, Israel police deployed in force at Ben-Gurion international airport in an effort to find and question Beitar fans suspected of taking part in the mayhem. By Saturday evening they had detained and questioned several Beitar FC fans at the airport, but no arrests were reported.During the team’s abysmal 5-1 loss to Sporting Charleroi in Belgium Thursday, Beitar fans threw smoke grenades and flares onto the field, stopping the match and lightly injuring the opposing team’s goalkeeper. Already at the beginning of the match play was delayed for three minutes after Beitar fans threw multiple flares onto the pitch and injured the Charleroi goalkeeper, who was hit by an object that appeared to come from the Beitar section behind his goal.Beitar fans were also involved in scuffles outside the stadium before the match and the club is expected to face punishment by UEFA in the coming weeks.It was the latest controversial display by supporters of the team, which has drawn rebuke in the past for being the only squad in Israeli soccer to not field Arab players and for the racist chants performed during games by their fans.  Following the match in the city of Charleroi, Beitar FC owner Eli Tabib expressed his disgust at the incident and vowed that he was finished with football.On Friday evening, the national police spokesperson’s office said that top officials had held a situation assessment earlier in the day and after consulting with the Jerusalem District Prosecutor’s office reached the decision to task the Jerusalem Police district with the investigation, which they will handle in collaboration with law enforcement authorities in Belgium.As the controversy raged back in Israel, Beitar supporters said in their defense that supporters of Sporting Charleroi made anti-Semitic chants, and performed the Nazi salute and unfurled a Palestinian flag.Also over the weekend, MK Yoel Razbozov (Yesh Atid) wrote Attorney General Yehuda Weinstein and asked that Beitar’s "La Familia" group of hardcore fans be declared an illegal outfit.MK David Amsalem (Likud), himself a Beitar fan, said he was disturbed by the fans’ behavior during the match, describing it as a “fringe element time and against manages to besmirch a large, glorious organization.”He also called on Tabib to reconsider his decision to leave the team.