"Mr. defense minister, we already have enough enemies surrounding us, so let's focus on the them," says Zionist Union MK Shelly Yacimovich after Liberman calls Kim Jong-un a "madman." 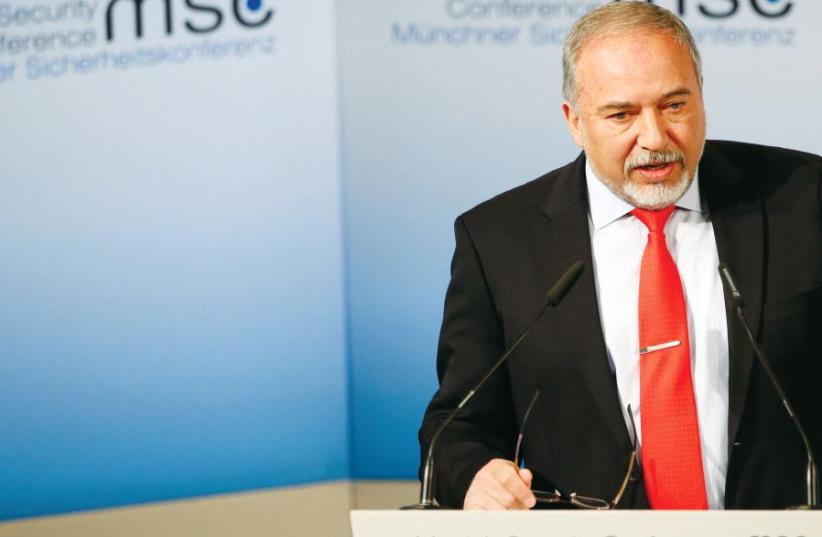 Defense Minister Avigdor Liberman speaks at the 53rd Munich Security Conference in Germany in February
(photo credit: REUTERS)
Advertisement
Politicians from across the political spectrum condemned Defense Minister Avigdor Liberman Sunday for making statements that embroiled Israel in an unlikely dispute with North Korea.In a video interview with Hebrew news site Walla, Liberman said North Korea’s leader Kim Jong-un is a madman and that together with the leaders of Iran and Syria is part of an “insane and radical” gang bent on undermining international stability.Liberman’s predecessor as defense minister, Moshe Ya’alon, made reference to controversial statements Liberman had made in the past that were not backed up with actions and suggested that Prime Minister Benjamin Netanyahu should silence him.
North Korea holds artillery drill as tension spikes (credit: REUTERS)
“After he bombed the Aswan Dam, toppled Hamas and assassinated [Hamas leader] Ismail Haniyeh within 48 hours, the minister of talking irresponsibly blabbers about North Korea, and there is no prime minister to put in line his babbling, warmongering ministers,” Ya’alon wrote on social media.Labor leadership candidate Erel Margalit said Liberman should have learned lessons from damage Margalit said Israel suffered from recent statements made by ministers Israel Katz and Naftali Bennett about purported Israeli attacks on Syria.“Mr. Defense Minister, we already have enough enemies surrounding us, so let’s focus on them,” Zionist Union MK Shelly Yacimovich said.Liberman hurt the “dignity of the supreme leadership” of North Korea, state-run Korean Central News Agency reported Saturday. The comment was in reaction to Israeli remarks on how the Jewish state is affected by North Korean tension with the United States.“The reckless remarks of the Israeli defense minister are sordid and wicked behavior and a grave challenge to the DPRK [Democratic People’s Republic of Korea],” the North Korean statement read.The statement also claimed that Israel, while working with the US, is the Middle East’s only illegal owner of nuclear weapons.“This is the cynical ploy to escape the world denunciation and curse as disturber of peace in the Middle East, occupier of the Arab territories and culprit of crimes against humanity,” the statement continued.The access to nuclear power is a “righteous right for self-defense to cope with the United States’ provocative moves for aggression,” the statement read.The statement also threatened Israel and anyone who “dares hurt the dignity of its supreme leadership” with “merciless, thousand-fold punishment.”The statement ended with a warning to Israel to “think twice about the consequences to be entailed by its smear campaign against the DPRK to cover up the crimes of occupying Arab territories and disturbing the peace process in the Middle East.”