Her portfolio includes one of the more contentious postings for an Israeli diplomat. 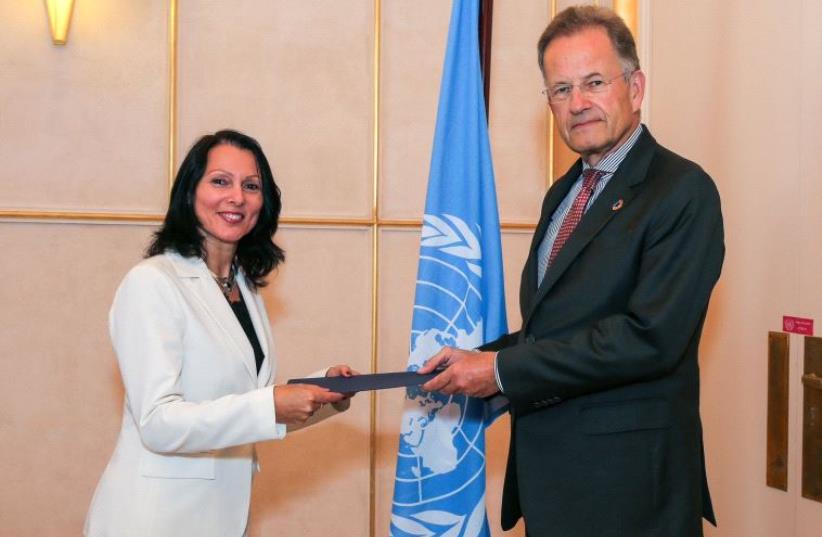 Aviva Raz Shechter, the new Israeli ambassador to the UN and Michael Møller, Director-General of the UN Office at Geneva.
(photo credit: FOREIGN MINISTRY)
Advertisement
Israel’s first female ambassador to the United Nations in Geneva — Aviva Raz-Shechter — formally took office on Monday.Her portfolio includes one of the more contentious postings for an Israeli diplomat, the UN’s Human Rights Council. It’s 47 member body has issued at least 62 resolutions against Israel, which is more than it has leveled against any other country including Syria and Iran.“It is an honor for me to represent Israel at the UN, here in Geneva, and to be the first Israeli woman diplomat to hold this important position,” Raz-Shechter said.“The relationship between Israel and the UN is sometimes challenging, since some UN bodies and agencies have taken biased decisions,” Raz-Shechter said.“Nonetheless, I am looking forward to engaging with my colleagues and to highlight Israel’s positive contribution to the world,” she said.The seasoned diplomat speaks four languages; Hebrew, English, Arabic and French.She has been posted both in Jordan’s capital city of Amman  and in Washington D.C.From 2005 to 2011 she was the director of the Foreign Ministry’s Department for Combating Antisemitism and for Holocaust Issues. For the last five years, from 2011-2016, she was the Deputy Director-General for the Foreign Ministry's Middle East and Peace Process Division.On Monday she presented her credentials to Michael Møller, the Director-General of the United Nations Office at Geneva.