The foreign minister, on his first visit to Israel, said that European efforts should be “concentrated on the possible contribution to restart the process." 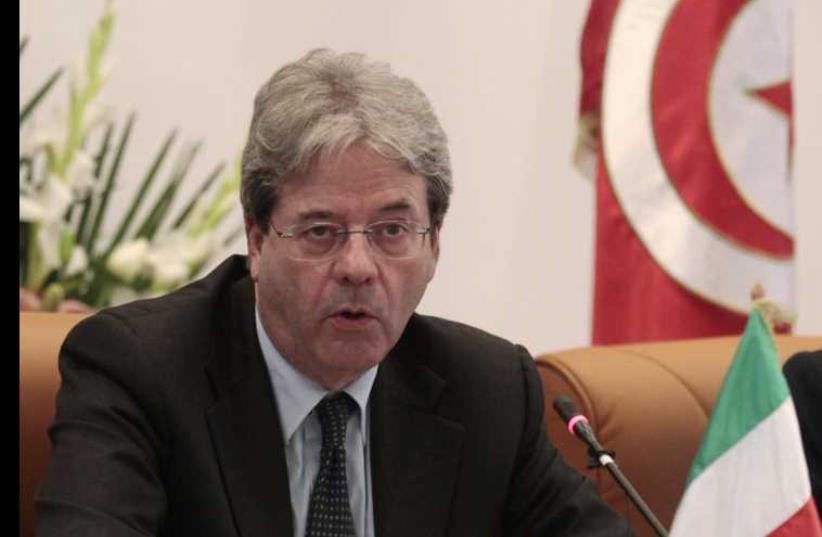 Italian FM Paolo Gentiloni
(photo credit: REUTERS)
Advertisement
Solving the Israeli-Arab conflict could send a signal of “peace and stability” to the region, Italian Foreign Minister Paolo Gentiloni said on Tuesday, softly contradicting Israel’s oft-stated position that the current regional turmoil shows the Palestinian issue is not key to a calm Middle East.Gentiloni, at a photo opportunity at the Prime Minister’s Office before meeting Prime Minister Benjamin Netanyahu, said that the way to “find peace and security” is through the “traditional way” of a two-state solution, “where the Palestinian people and the Jewish people could live in peace.”Gentiloni, on his first visit to Israel, said that European efforts should be “concentrated on the possible contribution to restart the process, because you know, prime minister, in this tough situation – Syria, Iraq, Libya, Yemen, the debate on the future relations with Iran – restarting a possible solution of the very old dispute here could be a signal of peace and stability for all the region.”The Italian foreign minister said that this was “naturally” not only in Israel’s hands, as “you have to have partners who accept this kind of philosophy and approach to negotiations.”After listening to a sharp Netanyahu critique of the Iran nuclear deal being negotiated, Gentiloni politely demurred there as well, saying that while he understood the prime minister’s concern and respected his position, Italy hoped that such a deal could help to “deescalate the tension that we have.”Gentiloni’s comment is in line with what Defense Minister Moshe Ya’alon said on Monday, that one of the fundamental differences when it comes to Iran between Israel and the US, and by extension the West, is that while Israel views Iran as the central problem in the Middle East, the US sees it as part of the solution.Netanyahu, who spoke before Gentiloni, said that the bilateral relationship between the countries was strong and “going forward.” He said that the Italians understood that Israel lives in a “very tough neighborhood,” and has to defend itself “against the forces of terror.”“The greatest sponsor of terror in the world is Iran,” he said.While the world is justifiably aghast at the violence and savagery of Islamic State, and no one would dream of allowing it to have nuclear weapons, “Why would anyone consider giving the Islamic State of Iran, which is a lot more powerful than ISIS and acts with much greater power than ISIS, to have additional power of nuclear weapons? “That’s a mistake,” he stressed. “The Islamic State of Iran, the foremost sponsor of international terrorism, should not have access to nuclear weapons.”He then reiterated his position, even as the world powers and Iran seemed on the verge of signing a nuclear deal in Vienna, that “we need a better deal. This deal should not pass.”On another matter, Gentiloni’s remarks regarding doing business with Israel were telling, especially in light of heightened concerns about possible European economic sanctions on Israel down the line.“We are great admirers of the Israeli capacity of innovation, research and technology,” he said. “I think we have many, many good reasons to strengthen our economic relations.”Deputy Foreign Minister Tzipi Hotovely met Gentiloni in the morning, and brought up the issue of labeling goods from the settlements – something that Italy is considering along with some other EU states – saying that Jerusalem views such a move as paving the way for sanctions against Israel, something that would push away the chances of a peace process and direct dialogue, not bring them closer.She also related to the French proposal to bring a resolution on the two-state solution to the UN Security Council, saying that Israel objected to the French move and viewed it as an “obstacle” to direct dialogue.