Jerusalem to name envoy to Turkey in coming days

The announcement of Turkey’s new ambassador to Israel is expected at around the same time. The two nations have not had ambassadors in each other’s countries since 2010. 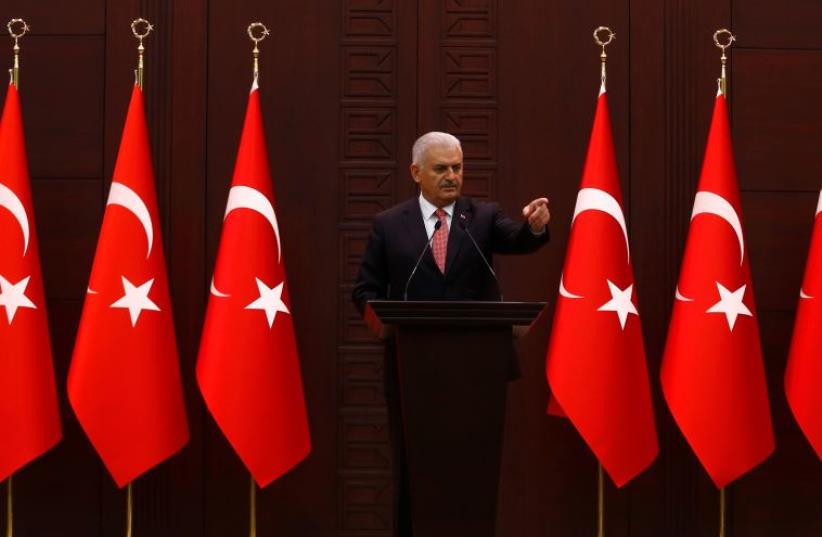 Turkey's Prime Minister Binali Yildirim addresses the media in Ankara, Turkey, June 27, 2016
(photo credit: REUTERS)
Advertisement
The Foreign Ministry’s appointments committee is expected to meet in the coming days to name Israel’s next ambassador to Turkey, following the Turkish parliament’s ratification on Saturday of the rapprochement agreement between the two countries.The announcement of Turkey’s new ambassador to Israel is expected at around the same time. The two nations have not had ambassadors in each other’s countries since Ankara recalled its ambassador in Tel Aviv in 2010 following the Mavi Marmara incident, and expelled Israel’s envoy to Ankara in 2011.Acting National Security Council head Yaakov Nagel, who was involved in the negotiations that culminated in an agreement on June 28, told Israel Radio that there were currently no plans for any high-level visits between the two countries, despite Turkey’s Deputy Prime Minister Mehmet Simsek tweeting over the weekend that he hoped to visit Israel in the near future.Nagel deflected criticism about Israel’s agreement to place some $20 million in a fund for the families of the 10 Turks killed when they tried to break the naval blockade of Gaza, saying that looking at the entirety of Israel’s interests with Turkey, this was a price worth paying. He said that reaching a deal without paying any compensation would have undoubtedly been the “best thing,” but that the amount agreed upon – while more than Israel’s initial offer – was “a lot less than what they opened the negotiations with.”Turkey, Nagel said, is an “important” and “big” country in the region with whom Israel shares security, diplomatic, economic and regional interests, and with whom it is important to have proper ties.At the same time, he had no illusions that the ties with Turkey would go back to what they were over a decade ago, before President Recep Tayyip Erdogan won national elections.The Turkish government is different than it was, he said, “and the region is different.”The agreement, which was already approved in Israel by the security cabinet, now must come for approval before the entire cabinet, something expected to be only a formality.In a related development, the Prime Minister’s Office issued a statement expressing condolences to the families of the 51 people killed in Saturday’s terrorist attack in Gaziantep. “In order to defeat terrorism, the international community needs to join forces and fight with strength and determination,” the statement read.