Jerusalemites torn over Herzog's proposal to give up Arab neighborhoods

Some agreed that fencing off problematic Arab neighborhoods would improve security, while others said more fences would be counterproductive. 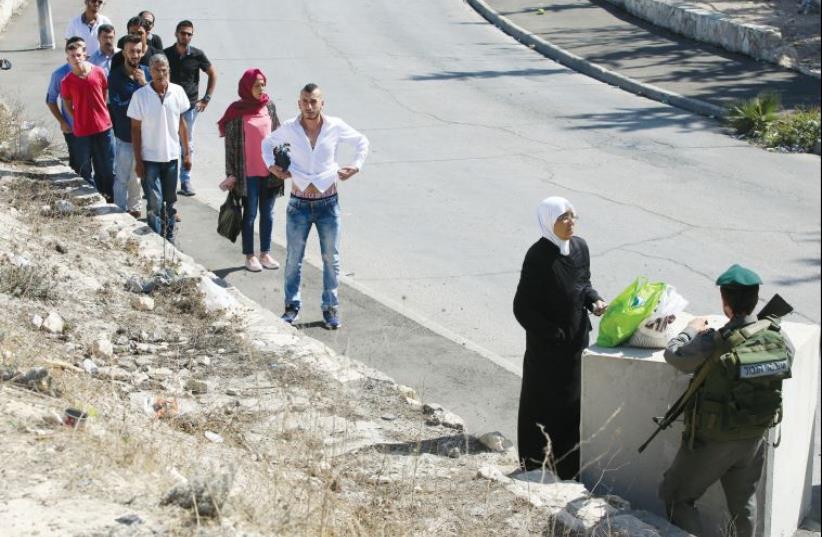 Arab residents are searched by soldiers as they pass through a checkpoint during the height of stabbing attacks in Jerusalem
(photo credit: MARC ISRAEL SELLEM/THE JERUSALEM POST)
Advertisement
Less than 48 hours after Zionist Union leader Isaac Herzog presented a diplomatic plan at the Jerusalem Conference to relinquish Arab neighborhoods in the capital to increase security, a cross-section of Israelis expressed conflicting opinions about the radical proposal.Immediately after Herzog contended that neighborhoods such as Shuafat and Isawiya were not critical to Jews, and that fences would help decrease Arab violence, Jerusalem Mayor Nir Barkat retorted that conceding sovereignty over east Jerusalem would be disastrous.“It begins with conceding sovereignty over neighborhoods in the eastern part of the city, continues with concessions in the Old City, and from there it is a short path to conceding sovereignty over the Western Wall, and indicating to the Palestinians that we will concede all our rights to this land,” he said.However, Israelis in Zion Square on Thursday were divided over the proposal, with some agreeing that fencing off problematic Arab neighborhoods would improve security, while others said more fences would be counterproductive.While 34-year-old tour guide Yaniv Mazor conceded that Arabs from certain flashpoint neighborhoods are indeed responsible for a disproportionate amount of attacks on Jews, he said that putting up walls would be “catastrophic for both Jews and Palestinians.”“Before we do that, we must ask ourselves fundamentally: What are the problems? What are the sources of these issues? Why are these people committing these horrible acts and atrocities against Jewish people in the city?” he asked.“Until we do that - until we thoroughly look at ourselves and what we’ve done here in the course of history in this city - we cannot come up with a real solution that will make life better here for everyone.”Moreover, Mazor noted that fences cannot solve what he deemed a political issue.“A political problem must have a political solution, and the leadership on both sides must cooperate to come up with a proper solution,” he said. “More walls, more troops - we’ve heard this before in many other places. The walls have gone up and they have always fallen down because the problem cannot be solved [this way].”“Jerusalem is a tale of two cities,” he continued. “And those two cities interact together and are intertwined in a big mess, but you literally cannot separate these two cities because it would be horrible for the economy and for the tourism industry. If you start slicing up parts of the city again it will have a major impact on the socioeconomic situation for both Jews and Palestinians.”With respect to security, Mazor said a fence is only a temporary solution. “It might calm things down in the short term in small locations, but eventually we see that the separation barriers that we already have around Jerusalem do not stop 30,000 Palestinian workers who cross them illegally every week just to work inside Israel, because they can’t get a permit to cross through the checkpoints,” he said.Still, Zvi Krnge, a 60-year-old businessman, asserted that cordoning off problematic Arab neighborhoods from the capital is essential to ensuring security.“I think we should put up a fence,” he said. “We had other fences in the West Bank that stopped terrorism from coming in, and if we can do the same thing in other neighborhoods in Jerusalem we’re not trying to divide the city, we're trying to protect the Jewish people.”In terms of Barkat’s contention that the city must not be divided, Krnge said that safety trumps political idealism.“They are harming our people, so we have to protect ourselves,” he said. “Something has to be done, and this is the best idea.”
Not so, said Shaked Regev, a 24-year-old student.“I think it would be a mistake to separate Arab neighborhoods, because we need to do something that involves education and diplomacy,” she said. “This is a problem that is far deeper than these last four months. I think the main solution needs to come from diplomacy, not a fence.”Meanwhile, Elia Ainbindel, 26, said that separation would present a host of practical dilemmas.“Put up a fence and then what?” she asked. “What will be the government there, and who will rule those places? The question is what will happen after that in terms of roads, sanitation, and who is in charge. Is it the police, the army, the Palestinian Authority?”“For the short-term, I guess it would make things safer, but if you think about the future, I’m not so sure,” she added.
Nonetheless, Chavy Gidaneon, 18, said she believes a fence is the only option to ensure security.“For the Jews to be safe is more important than dividing Jerusalem,” she said. “And I think Herzog’s idea is a good one. If it makes us safer than it doesn’t matter what the mayor thinks.”Former east Jerusalem portfolio head and Meretz councilman Dr. Meir Margalit said to ensure the city’s survival, Arab and Jewish communities must be divided into two autonomous municipalities.“The city is already divided in a de facto manner, so the best we can do to save Jerusalem as a Jewish city is to [formally] divide it into separate municipalities as soon as possible,” he said. “Otherwise, in the next five or six years, Palestinians will be the majority, and the next mayor will be Palestinian because they can vote and be elected, too.”“So, if people really care about the future of Jerusalem, they must divide the city immediately and put the myth of a ‘united capital’ aside,” he continued. “Then the city will be safer.”However, Margalit emphasized that the division must not be made with actual fences.“We don’t need more fences; the current fence is enough,” he said. “The city should be divided into functional divisions without fences. Divide it to keep it united.”Gil Hoffman contributed to this report.