The former senator also called for President Obama to order construction of new American Embassy in Jerusalem, calling its absence an "anomaly." 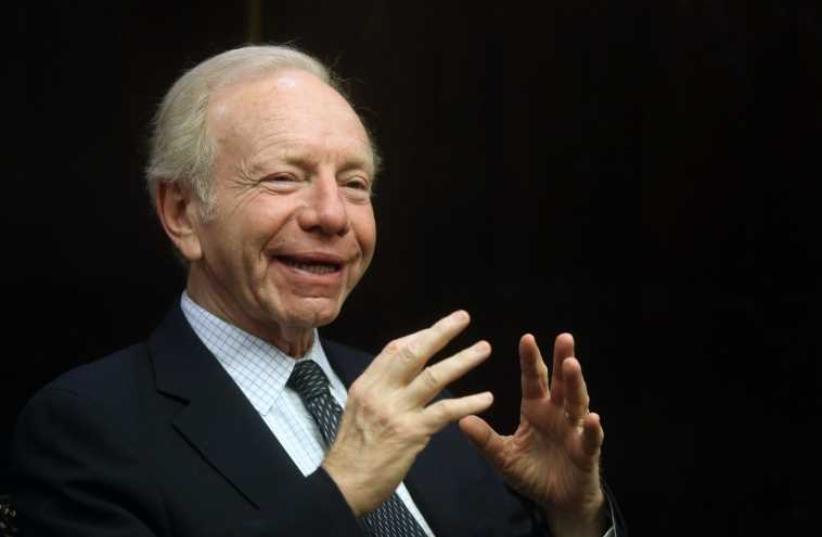 Former US Senator Joe Lieberman
(photo credit: MARC ISRAEL SELLEM)
Advertisement
Former US senator Joe Lieberman says negotiations with Iran are heading toward a very bad agreement. “The goal was to end the Iranian nuclear program in return for the end of economic sanctions... Now it looks like we’re heading toward the permanent end of economic sanctions and the temporary dialing back of Iran’s nuclear program.”Lieberman says the move by Congress to give itself power to review any final deal with Iran is “very unusual,” but he sides with it unequivocally.The four-term senator from Connecticut and 2000 vice-presidential nominee is in Israel to accept Bar-Ilan University’s Guardian of Zion Award from the university’s Ingeborg Rennert Center for Jerusalem Studies.In an interview Thursday morning before his acceptance speech at the King David Hotel in Jerusalem, Lieberman said that this is the best time in history for the Jews: “We are really a fortunate and blessed generation to be alive when the State of Israel has been recreated and re-established in its ancient homeland.”He adds that the Jews are “doubly blessed,” because of the unprecedented relation - ship between Israel and America. “The existence of Israel, the existence of America as a democratic superpower, this is an extraordinarily good time. There is strength in Israel and America to resist the challenges that my children and grandchildren will grow up with.”He said that, in light of Prime Minister Benjamin Netanyahu’s announcement that Israel is ready to reengage in peace talks, US President Barack Obama should order construction of America’s new embassy in Jerusalem.“Today, I also want to appeal to President Obama to direct that construction begin on a new American Embassy in Jerusalem. That would end the unjust anomaly of the US locating our embassy in the city in every other country in the world that the host country designates as its capital, but not doing so in a country that is one of our closest allies and best friends in the world.”The Guardian of Zion award, whose previous winners include Rabbi Lord Jonathon Sacks and Israel Museum director James Snyder, is given annually to those who are dedicated to the strengthening of Jerusalem.Rennert Center director Prof. Joshua Schwartz said Lieberman has been described in Washington “as someone who without exception and conditions was the No. 1 pro-Israel advocate and leader in Congress.”In person, Lieberman is jovial and approachable, always happy to shake hands and take pictures with well-wishers. When he mentions the US in casual conversation, he adds as almost an afterthought, “the greatest country in the world.”The proud product of Kennedy-era patriotism, he cites the 35th president’s inaugural address: “‘We’ll pay any price, bear any burden, support any friend, oppose any foe, to guarantee the survival and spread of liberty.’ That’s what America’s all about, freedom.”Yet despite his easy demeanor, he is hawkish on foreign policy and security. He is articulate and straightforward on his criticisms of the Obama administration. At the start of the Syrian civil war, Lieberman joined Senator’s Lindsey Graham and John McCain in calling on the US to support the Free Syrian Army. “In my opinion, they were not extremists,” he says, adding that all the US did, and most of the world too, was pay them “lip service.”“History will look back on these last four years since the uprising against Assad began in Syria and the US will really be judged harshly. Our position has been foolish in terms of geopolitics and also immoral in terms of the humanitarian crisis there,” Lieberman said.He said Obama’s failure to act when it was proven Assad had used chemical weapons against his own people constituted one of the lowest points in American foreign policy.“The fact is we are the worlds greatest power. If we don’t exercise leadership and involvement in the world, people who have different values and interests will take over. I’m afraid that’s what’s happened in the last years.”The only time Lieberman ventures into “diplomatic speak” is at the mention of the Supreme Court’s upcoming ruling – expected in June – on whether it is unconstitutional for states to ban same-sex marriage. Lieberman was one of the main legislators to repeal “Don’t Ask, Don’t Tell,” – the US military’s policy on homosexuals being able to serve in the army but not openly.Same-sex marriage is legal in his own state, but he says he’s unsure from a legal standpoint whether the right to legalize rests with the state or should be enforced nationally by the Supreme Court.“If I was voting today in the Connecticut legislature, I would vote to legalize same sex marriage. I’m not sure how I would vote on the constitutional question if I was sitting on the Supreme Court.”For his own legacy, Lieberman hopes that his ability to work across party lines to achieve his goals is what he’s most remembered for. “We’re very divided now, very partisan and very ideologically rigid, and as a result, the government’s getting very little done, problems are going unsolved.”For the next incoming president – whom Lieberman won’t publicly endorse at this time – his or her biggest challenge will be to unite the country politically.When he looks back at his accomplishments, environmental legislations, the changes after 9/11 – the creation of the Homeland Security Department, the 9/11 commission report, reform of intelligence agencies – Lieberman concludes that he was able to achieve all those things because he had bipartisan sup - port. “If I wanted to be an effective legislator, that’s what I had to do.”