MKs from the Islamic Movement-affiliated UAL party within the Joint List said they would visit the Temple Mount during Ramadan despite the ban. 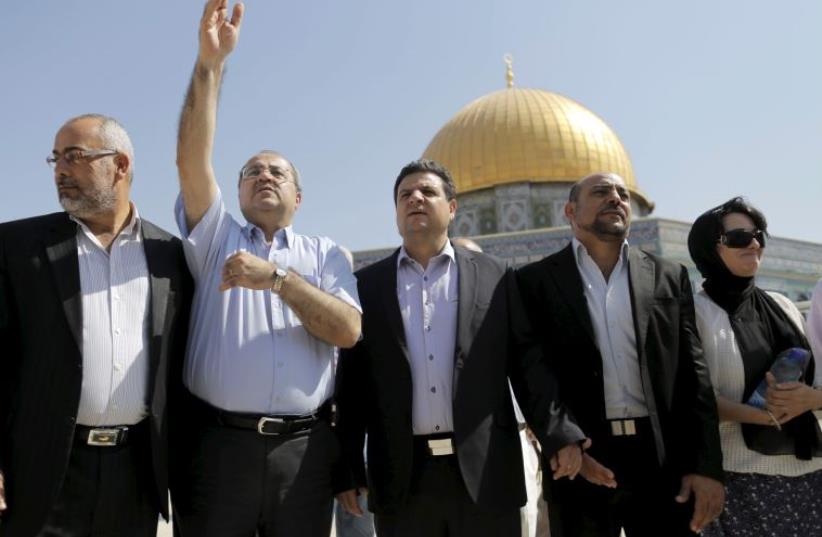 Israeli Arab lawmakers from the Joint List (from L to R) Osama Saadi, Ahmed Tibi, Ayman Odeh, Masud Ganaim and Haneen Zoabi stand in front of the Dome of the Rock
(photo credit: REUTERS)
Advertisement
Arab MKs should be allowed to enter al-Aksa Mosque, MK Yousef Jabareen (Joint List), a member of the Knesset Ethics Committee, wrote to the panel’s chairman, Yitzhak Vaknin (Shas), Tuesday, complaining about its view of such visits as an ethics violation.According to Jabareen, not allowing MKs to ascend the mount during the Muslim holiday month of Ramadan “is a serious violation of the immunity and rights of MKs, such as their freedom of religion and movement.”In November, the Ethics Committee warned that MKs who visit the Temple Mount could face sanctions, upholding a decision by the police to ban lawmakers from the holy site – where the two Jewish Temples once stood – in order to reduce tension and security risks.Jabareen was the sole committee member who voted against the ban.“It is unacceptable that this prohibition has continued for so long,” he wrote. “I do not want a provocation nor do Arab MKs who want to enter the mosque and pray mean to provoke, and they cannot be compared to provocations by right-wing MKs who wish to change the status quo at the site and support settlers’ visits to the mosque and their prayers there.”Non-Muslims are permitted to visit the Temple Mount, but may not pray there, and many are barred by the Jordanian Wakf that manages the site from entering the mosque.The Wakf often harasses non-Muslim visitors to the Temple Mount.“I think the committee should reconsider [the ban] and cancel the decision immediately,” Jabareen added.Last week, MKs from the Islamic Movement-affiliated UAL party within the Joint List said they would visit the Temple Mount during Ramadan despite the ban.MK Yehudah Glick (Likud) filed his first ethics complaint as an MK against MK Masoud Gnaim (Joint List), who wrote the letter about the UAL lawmakers’ plans, saying Gnaim “announced in advance that he plans to trample and disrespect the Ethics Committee’s rules.”Glick was an activist for Jewish rights on the Temple Mount before entering the Knesset, surviving an assassination attempt by a Palestinian who said he was “endangering al-Aksa.” The Likud MK said he would not violate the ban on politicians’ visits.