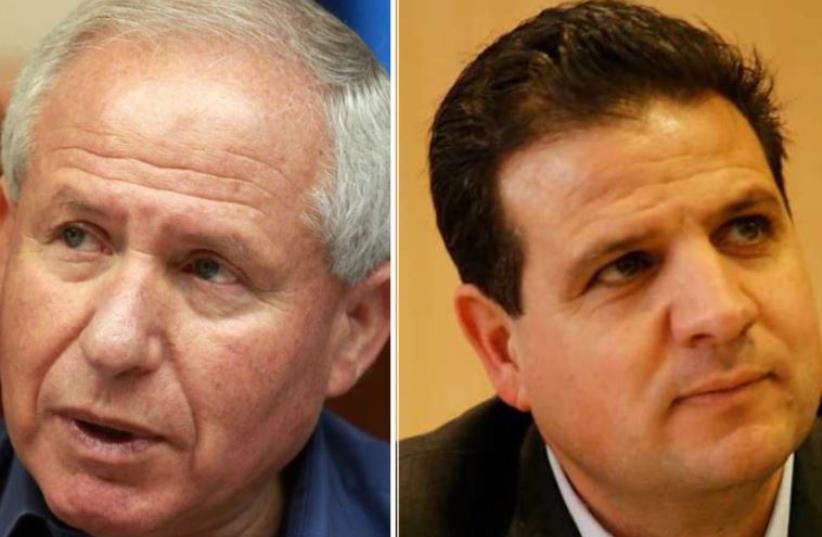 Joint List MK Ayman Odeh and Likud MK Avi Dichter.
(photo credit: MARC ISRAEL SELLEM & FACEBOOK)
Advertisement
Joint List MK Ayman Odeh on Monday accused Likud MK and former Shin Bet head Avi Dichter of sending "people" to kill former PLO leader Yasser Arafat, and Hamas leaders Sheikh Ahmed Yassin and  Abdel Aziz Rantisi.His comments were made during an interview on Channel 2 following the Knesset approval of a controversial bill which would allow lawmakers to vote to suspend colleagues from their positions with a 90-MK majority. "Knesset Members sent 'people' to murder the leadership of the Palestinian people," Odeh said. "Dichter sent them to murder Arafat...and Yassin, and Rantisi. And he is sitting in the Knesset - the man who sent people to kill people."In response to Odeh's comments, Dichter expressed pride for having had the privilege during his term as Shin Bet head to protect the citizens of Israel - including Israeli Arabs such as Odeh - from terror threats inflicted upon Israeli citizens by the Arab "leaders which Odeh is defending."Odeh has "turned himself into a representative for Hamas leaders in the Knesset," Dichter said. By doing so, he is "forfeiting the security of Israeli citizens - Arabs and Israelis alike," he added.