JPost Poll: 67% say Netanyahu should suspend himself if charged

By LAHAV HARKOV
AUGUST 10, 2017 20:56
Prime Minister Netanyahu enters a meeting of the security cabinet, August 2017
(photo credit: MARC ISRAEL SELLEM/THE JERUSALEM POST)
Advertisement
Despite defenders in the Likud and other coalition parties saying Prime Minister Benjamin Netanyahu can remain in office even if he is faced with corruption charges, a Smith Consulting firm poll conducted this week for The Jerusalem Post found that most people supported the idea of him suspending himself in such a case.Asked if it would be acceptable for Netanyahu to suspend himself if he is indicted, 67% of residents said yes, and the rest said no. Likud voters were almost evenly split – 53%-56% – on the question, while 80% of voters on the Left supported him taking leave of office.The law only gives a prime minister the option of a 100- day suspension if he or she is in some way incapacitated. It is unprecedented for one to do so for other reasons.Asked who is the most appropriate choice to be prime minister without Netanyahu as a candidate, Yesh Atid leader Yair Lapid, Bayit Yehudi chairman Naftali Bennett, former Likud minister Gideon Sa’ar and Zionist Union head Avi Gabbay topped the list, faring about the same.In the Sa’ar scenario, he tied for first place with Lapid, at 16% each, followed by Bennett and Gabbay at 14% each.Defense Minister Avigdor Liberman got 9%, and 31% did not know. If Public Security Minister Erdan is added to the scenario, Lapid, Bennett and Gabbay tied at 16%, Liberman got 10% and Erdan received 8%, while 34% did not know.

Among Likud voters, Bennett was the leading candidate, with 28% choosing him, as opposed to 16% for Sa’ar, or 27% Bennett and 17% Erdan.Respondents were asked – one with Sa’ar as an option, and one with Erdan (who came first in the last Likud primary) as an option. The results indicate that twice as many people think Sa’ar is a more fitting prime minister than Erdan.The Likud was not particularly hurt by the multiple investigations into alleged corruption on Netanyahu’s part, according to the poll. If an election were held this week, the prime minister’s party would receive 27 seats, as opposed to its current 30.The second largest party would remain Zionist Union, with 20 seats instead of its current 24, indicating a sharp rise in its polling numbers after Avi Gabbay was elected party leader. Lapid’s Yesh Atid party is nearly tied with Zionist Union at 19 seats, up from the 11 it has today.The Joint List got 12 mandates, one less than it currently has, followed by Bayit Yehudi with 10, up from its current eight, and Kulanu with eight, as opposed to its current 10. Yisrael Beytenu and United Torah Judaism, which have six seats each in the 20th Knesset, would each get seven. Shas dropped from its current seven to five, and Meretz remains steady with five seats.The list led by former defense minister Moshe Ya’alon and the Yahad Party led by former Shas leader Eli Yishai were close to passing the 3.5% electoral threshold.Another 13% of respondents said they were undecided. 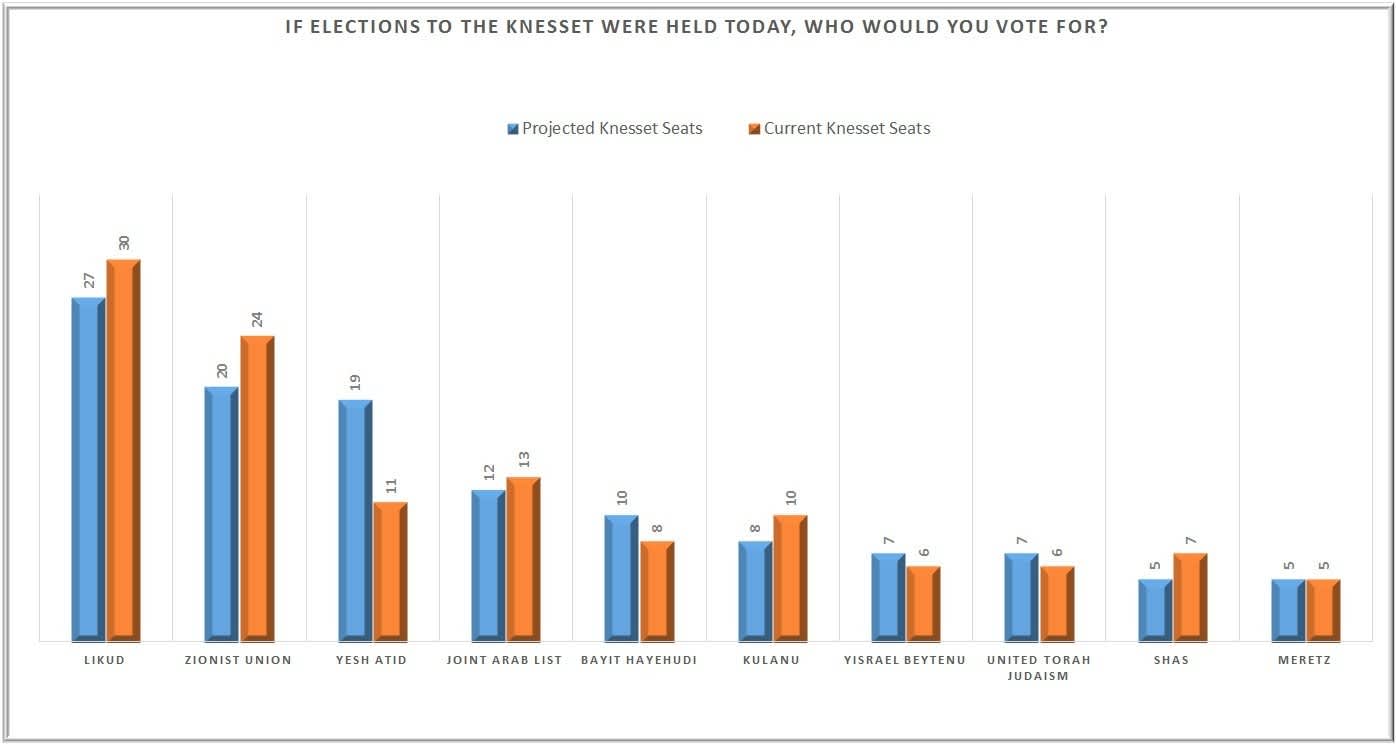 The poll was conducted on August 7-8 among 500 respondents, making up a representative sample of the adult Israeli population. Its margin of error is ±4.5%.