Kenyan president arrives in Israel for first visit since 1994 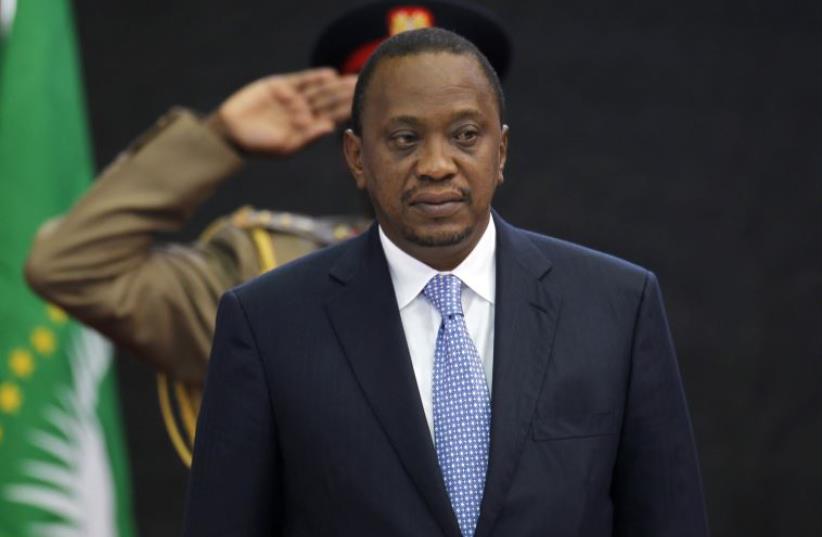 Kenya's President Uhuru Kenyatta
(photo credit: REUTERS)
Advertisement
Israel is coming back to Africa, and Africa is returning to Israel, Prime Minister Benjamin Netanyahu said Tuesday in welcoming visiting Kenyan President Uhuru Kenyatta to his Jerusalem office.Kenyatta arrived in Israel on Monday for a three-day state visit, the first by a Kenyan president since Daniel Moi in 1994.Netanyahu characterized as “remarkable” the relationship between the two countries that goes back “over half a century.” He pointed out that Kenyatta's father Jomo, the founder of Kenya, “demonstrated that friendship most dramatically 40 years ago in helping Israel in the raid on Entebbe.”Kenyatta allowed Israeli planes refuel in his country during the 1976 rescue of the hostages in neighboring Uganda. As first reported last week in The Jerusalem Post, Netanyahu hopes to travel to Kenya and Uganda this summer to commemorate the 40th anniversary of that raid.“We have since developed a relationship in many areas,” Netanyahu said, noting that he and Kenyatta speak regularly on the phone.The first area of cooperation, he said, “is our common battle against militant Islamic terrorism.” Kenya is fighting against the al-Qaeda affiliated al-Shabaab terrorist organization active in east Africa.“Both our peoples have suffered casualties at the hands of these brutal terrorists,” the premier said of the Islamic extremists. “We have no illusions about them . They want to murder our people, and we know that this is a common battle that we share with you.”Netanyahu said that Israel, which already provides training and security assistance to Kenya, is “prepared to do a great deal more. In fact Israel is willing and prepared to work with Africa in our common battle against militant Islamic terrorism.”Netanyahu said that more and more African countries are realizing that they have a partner in Israel in their fight against terrorism. Likewise, he added, Israel is willing to work together with Kenya and the rest of Africa in many other spheres as well, including agriculture, water irrigation, and technology.“You are in many ways leading this direction,” Netanyahu said to his guest. “And I welcome that not merely in the context of our relationship with Kenya, but in our relationship with the countries of Africa.”Kenyatta, in his remarks, called this a “historic visit,” and said that both countries live in “challenging neighborhoods” and share similar security concerns.“The cooperation between our countries since the time of our independence has been formidable, and we look forward that this particular trip will even strengthen those ties in the the future,” he said.The two men signed joint statements on water and agricultural cooperation.Kenyatta met President Reuven Rivlin before meeting Netanyahu, with Rivlin saying that Israel stands together with Kenya “against those who pretend to speak in the name of Islam, as they murder innocent men, women, and children from all religions and nations.”The Kenyan president termed Israel “a dear and very special friend,” and praised Israel for the “excellent support” that it has given Kenya on security matters such as training of personnel and supply of defense equipment. He also encouraged Israeli investments in his country.Kenyatta is accompanied on his visit by his foreign affairs, internal security, water and health ministers.Greer Fay Cashman contributed to this report.