The appointment of Ran Baratz as Netanyahu's new media adviser has drawn scrutiny and criticism from the Israeli press. 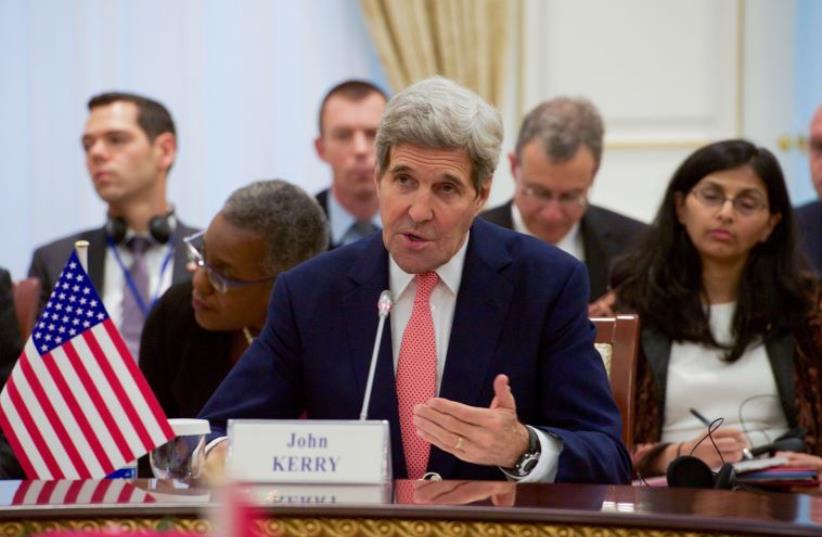 US Secretary of State John Kerry addresses the C5+1 Ministerial Meeting in Samarkand, Uzbekistan
(photo credit: STATE DEPARTMENT)
Advertisement
Ran Baratz, the man who has been appointed by Prime Minister Benjamin Netanyahu as his top media adviser, once referred to US Secretary of State John Kerry as someone "whose mental age doesn't exceed 12."In a column that he wrote for an online media magazine last year, Baratz offered a scathing critique of Kerry's suggestion that the
emergence of Islamic radicalism in the Middle East could be traced to the lingering Israel-Palestine conflict.During remarks at a White House ceremony for the Muslim holiday of Eid al-Adha last year, Kerry implied that the strife resulting from the decades-long dispute between Israel and the Palestinians has harbored an environment prone to fostering extremism."I think that it is more critical than ever that we be fighting for peace, and I think it is more necessary than ever... As I went around and met with people in the course of our discussions about the ISIL (Islamic State) coalition, the truth is we – there wasn’t a leader I met with in the region who didn’t raise with me spontaneously the need to try to get peace between Israel and the Palestinians, because it was a cause of recruitment and of street anger and agitation that they felt," Kerry said. The remarks elicited condemnations from Israeli officials, including then-economy minister Naftali Bennett."Asserting that the Israeli-Palestinian conflict reinforces ISIS, gives a boost to global terrorism," Bennett said.In his column for the Hebrew online outlet MIDA, Baratz wrote: "To Kerry's credit, it should be noted that there is no Miss America around who could say what he said any better. This is the time to wish the secretary of state good luck, and to count down the days with the hope that someone over there at the State Department will wake up and begin to see the world through the eyes of a person whose mental age exceeds 12."Netanyahu's latest appointment has been criticized by the Israeli press over the last two days due to controversial tongue-in-cheek Facebook posts made by Baratz denigrating President Reuven Rivlin.When it was learned that Rivlin had recently made an official state visit abroad by flying coach, Baratz wrote: "I think it says a lot that the president flies economy class, turned around and shook everyone's hand on board. It mainly says that he is such a marginal figure that there's no need to fear for his life. It seems that we could even send him paragliding over the Golan Heights and into ISIS-controlled territory (a reference to the Israeli-Arab who was said to have done that last week)."These posts prompted Rivlin's aides to seek clarifications from the Prime Minister's Office.When asked for comment by The Jerusalem Post's Hebrew-language sister publication Ma'ariv about the Facebook posts, Baratz said: "I wrote those posts as a private citizen, and now I'm obligated to be diplomatic and statesmanlike. It was just Facebook humor."
Advertisement
Subscribe for our daily newsletter