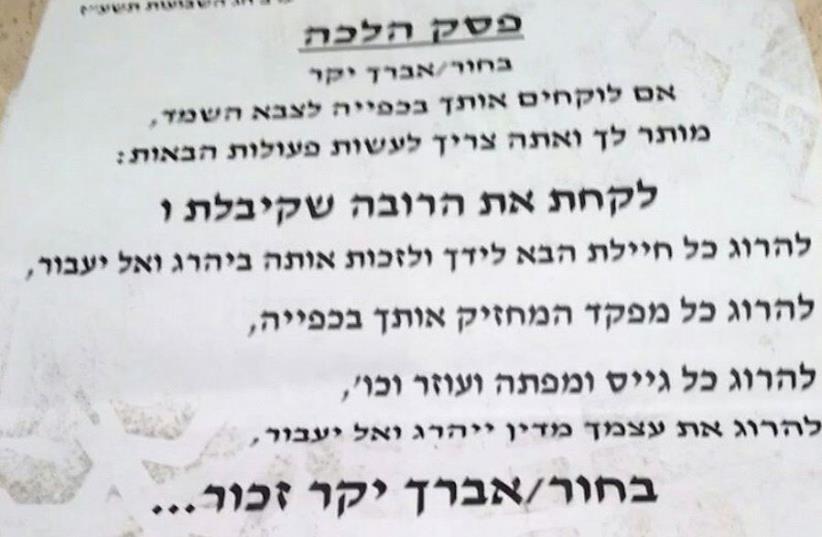 'Kill next woman soldier you see' says flier against haredi IDF service
(photo credit: Courtesy)
Advertisement
In a severe escalation of incitement against haredi (ultra-Orthodox) enlistment in the IDF, a flyer was recently distributed in Jerusalem’s ultra-Orthodox neighborhoods that called for the murder of women soldiers, IDF commanders and anyone involved in recruiting haredi men into the army.Until now, the campaign against haredi IDF service has refrained from calling for violence, sufficing instead with severe incitement and vitriolic verbal attacks against haredi soldiers, officers and recruiters.The flyer, however, is very different from materials normally printed and distributed by such groups. Some doubt has surfaced as to whether the flyers were part of the central anti-enlistment campaign because its wording is unlike that of standard pashkavillim, public notices commonly used in the haredi community.It was also not professionally printed, as are regular pashkavillim and anti-haredi military service materials.The flyer, titled “A Ruling of Jewish Law,” instructs young haredi men who are drafted into the IDF: “If they take you by force to the army of destruction, it is permitted for you and you must do the following actions: Take the rifle that you received and kill any woman soldier you come across so she merits [the precept of] ‘be killed instead of transgressing.’ Kill any [IDF] commander who holds you [in the army] by force. Kill anyone who drafts or entices or helps [to draft haredi men].”The notice also said that soldiers should kill themselves in order to fulfill the precept of ‘be killed instead of transgressing,’ which in normative Jewish law applies only to instances in which one must murder, engage in forbidden sexual relationships or commit idolatry.Police are investigating the source of the pamphlet, which incites to violence.For the last four years, extremists in the ultra-Orthodox community have waged a campaign against haredi men serving in the IDF out of belief that the state is trying to eradicate their religious identity by secularizing them in the army.Ultra-Orthodox IDF soldiers, officers and officials involved in encouraging haredi enlistment have frequently been subjected to verbal abuse, physical assault, harassment and even death threats. Flyers, posters and booklets inciting against haredi IDF enlistment have been published and disseminated in ultra-Orthodox neighborhoods.A poster that is certainly part of the anti-enlistment campaign, which was disseminated earlier this week in Bnei Brak and Beit Shemesh, promises as much as NIS 810 to haredi children if they verbally abuse haredi soldiers.


The poster lauded an incident last month in which a haredi child engaged in abusive behavior toward a haredi soldier and was detained by the police.The poster noted that the child’s behavior was “in keeping with the Torah and the instructions of the leading rabbis who have ruled that one must disgrace [haredi soldiers].”“Remember pure children! You are on the side of Torah, the side of God, you will be victorious! These evil people will not succeed in destroying your future,” reads the poster, which refers to haredi soldiers as “hardak,” an insult meaning weak-minded haredi.“But, so that we too will have a portion in your massive merit, we have decided to grant to all children who they dare to put in a police patrol car – because he fulfilled the religious commandment to shout ‘hardaks get out’ – a present or voucher worth NIS 530, a number that has the numeric value of ‘hardaks get out now,’” states the poster.Any child struck during the arrest, the poster promises, will receive a further award of NIS 290, the numeric value of “fist.”Only those under the age of 15 qualify for the reward, which will be delivered to the child’s house, according to the poster.Police have stepped up efforts in recent months to counter assaults against haredi IDF soldiers, conducting arrests and investigations against those behind the incitement campaign.