The committee will reconsider the decision when the police decides it is safe to allow MKs to visit the holy site. 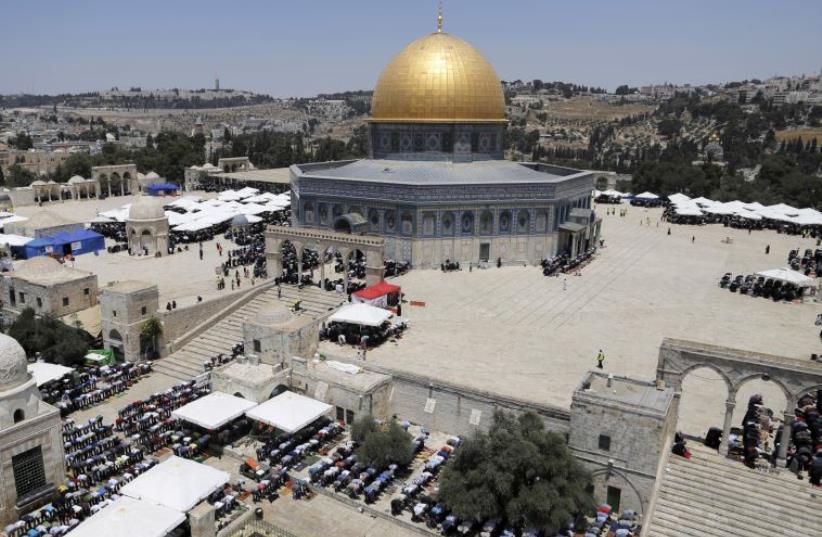 The Temple Mount complex in Jerusalem
(photo credit: REUTERS)
Advertisement
The Knesset Ethics Committee decided on Tuesday that MKs will not be permitted to visit the Temple Mount, despite a framework drawn up by the police allowing them to do so.At the request of Ethics Committee member MK Youssef Jabareen (Joint List), the committee reviewed the ban which it had implemented on November 2, following a police warning that visits to the holy site by politicians could provoke violence.Police Jerusalem District head Asst.-Ch. Yoram Halevy gave the Ethics Committee an overview of security on the Temple Mount, and said that in light of the relative calm in Jerusalem, the police is considering a plan whereby Arab MKs will be allowed to ascend the Temple Mount the last week of Ramadan, and after the Muslim holy month, all lawmakers would be allowed to visit the site.However, Halevy said that at the moment, the police recommendation has not changed.Three of the four Ethics Committee members then voted not to change the earlier decision – that ascending the Temple Mount would be considered an ethical violation.The committee will reconsider the decision when the police decides it is safe to allow MKs to visit the holy site.The Temple Mount is the holiest site in Judaism, where both Holy Temples once stood. Currently, al-Aksa Mosque stands atop the mount, which is administered by the Jordanian Wakf Muslim religious trust. The Wakf bans all non-Muslim prayer in the entire plaza, and together with Palestinians not acting in an official capacity, often harasses Jewish visitors.Also on Tuesday, MK Masoud Gnaim (Joint List) admitted that he and other MKs from the southern branch of the Islamic Movement- affiliated United Arab List, a party within the Joint List, attempted to visit the Temple Mount two weeks ago.Police officers at the site recognized him and MK Taleb Abu Arar (Joint List), and stopped them from entering, but they did not recognize MK Abd al-Hakim Haj Yahya, and he prayed at the mosque.“MK or not, as a person, a Muslim, who is used to bringing my family to pray [at the mosque], I have a right to enter,” Gnaim lamented to the Knesset Channel.Last month, Gnaim wrote a letter to Knesset Speaker Yuli Edelstein on behalf of himself, Haj Yahya and Abu Arar, stating that they “intend to enter al-Aksa Mosque and pray in it during the month of the fast of Ramadan. Fulfilling this religious commandment is a basic right, and part of our lifestyle as Muslims and religious people.”The letter came the same week Temple Mount activist Yehuda Glick was sworn in as a Likud MK. Glick said he would honor the ban, despite his dedication to equal rights for Jews at the site, and he petitioned an ethics complaint against Gnaim for saying he would knowingly violate it.In November 2014, Glick survived an assassination attempt by Mutaz Hijazi, an Arab from Jerusalem who shot Glick in the chest four times and called him “an enemy of al-Aksa.”