The meeting was called two weeks after a lecturer from the Hebrew University of Jerusalem called Justice Minister Ayelet Shaked “neo-Nazi scum,” “filth” and accused her of taking part in genocide. 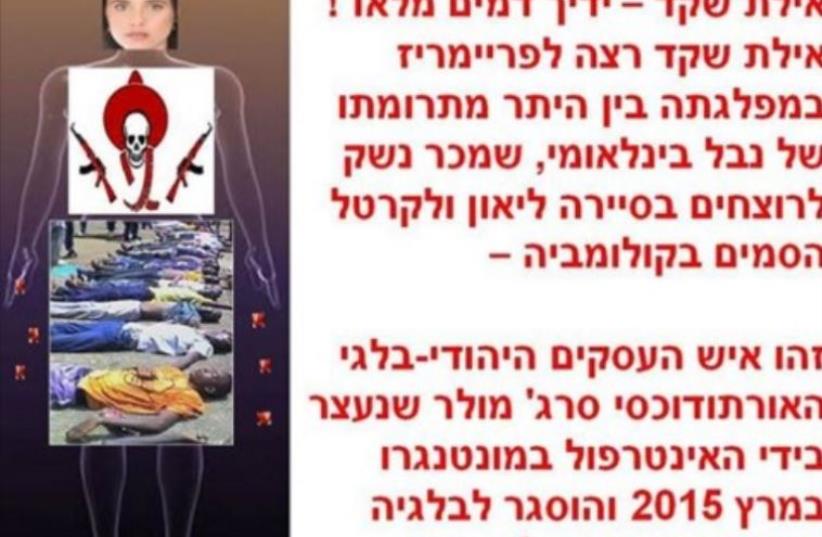 Anti-Ayelet Shaked post from the Facebook page of Amiram Goldblum‏
(photo credit: FACEBOOK)
Advertisement
Academics and intellectuals should exercise restraint on any topic pertaining to the political discourse, MK Ya’acov Margi (Shas), chairman of the Knesset Education, Sports and Culture committee said Monday.He made these remarks during a Knesset meeting to discuss the “harsh remarks” made by lecturers in academia against elected officials and students.The meeting was called just two weeks following the media storm surrounding two lecturers from the Hebrew University of Jerusalem - Professor Amiram Goldblum and Dr. Ofer Cassif - who came out against Justice Minister Ayelet Shaked on Facebook with the latter calling her "neo-Nazi scum,"  "filth" and accusing her of having part in genocide.The MKs were split about how to best respond to political statements made by university lecturers.Some MKs, while condemning the remarks, said they represent freedom of speech while others called for the immediate dismissal of the lecturers.MK Moti Yogev (Bayit Yehudi), one of the initiators of the discussion, said Cassif not only “crossed a line” in his remarks but that he was also unapologetic for his statements.“I expect the Hebrew University to call the lecturer for an inquiry and if he does not apologize then the heads of the university should fire him,” he said.MK Sharren Haskel (Likud), also one of the initiators of the discussion, said lecturers are “not only our teachers but we also receive from them values and morals and ideology.”As such, she said students should not be expected to “absorb such words and incitement.”The committee heard from Prof. Menachem Hofnung, head of the university’s political science department.who said he spoke to Cassif because he is a lecturer in his department, asking him to refrain from speaking in such a manner.“That is the extent of what I can do because of freedom of academic speech and the fact that he made these remarks outside of the university,” he explained. “If someone believes that he has violated the law [with his remarks] then they should file a complaint to the police.”MK Eitan Broshi (Zionist Union) said the discussion should not divide into the Right or the Left but that it represents a problem of lack of responsibility and is a greater reflection of “cultural behavior.”He called to establish an authority, similar to the Knesset ethics committee, to oversee the actions and statements of university lecturers.The committee also heard from numerous students and members of Im Tirzu, who said they were afraid to express their political views for fear of receiving bad grades from the lecturers.In addition, several students said they were victims of harassment by university lecturers due to their political beliefs.APOLOGYWe apologize to Professor Amiram Goldblum for attributing incorrect statements to him in an earlier version of this story. Professor Goldblum did not say or write any of the expressions attributed to him in the story. Moreover, Professor Goldblum previously denounced those expressions in several media outlets.