Knesset panel: It's OK for Shaked to meet family of alleged Duma killers

“There was no improper behavior by Justice Minister Ayelet Shaked,” a Knesset ethics committee said on Sunday, striking down a motion by Meretz MK Tamar Zandberg. 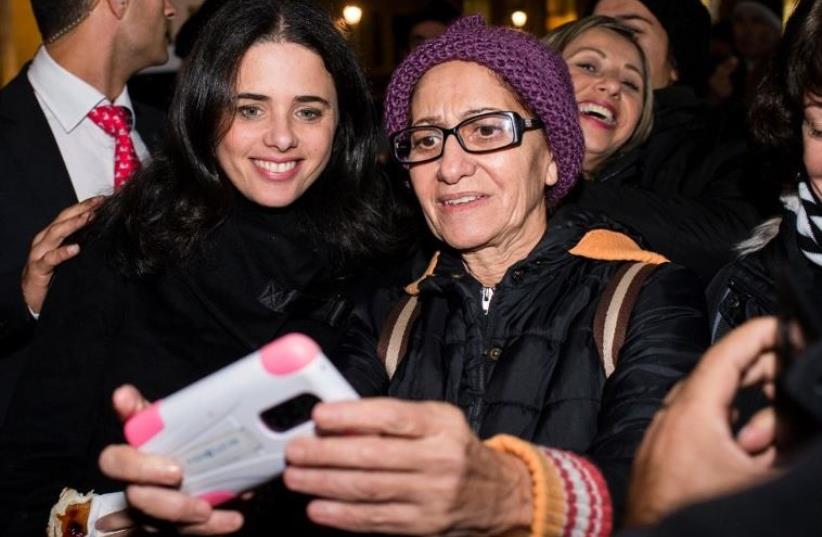 Justice Minister Ayelet Shaked (L) poses for a selfie picture with a member of the Jewish community in Berlin
(photo credit: AFP PHOTO)
Advertisement
A parliamentary ethics panel ruled on Sunday that Justice Minister Ayelet Shaked acted within the bounds of her duties by meeting with the family of one of the Jewish extremists charged in the murder of three Palestinians from the village of Duma.“There was no improper behavior by Justice Minister Ayelet Shaked,” a Knesset ethics committee said on Sunday, striking down a motion by Meretz MK Tamar Zandberg.The leftist lawmaker filed the motion, arguing that Shaked’s meeting signaled encouragement to far-right wing operatives in the West Bank to continue attacks against Palestinians.Zandberg was compelled to submit an official complaint against Shaked in light of the punitive measures taken against lawmakers from the Arab nationalist Balad party following their controversial meeting with the families of Palestinian terrorists.The Knesset ethics committee ruled that the Arab lawmakers violated parliamentary norms and that their actions warranted a suspension from plenum discussions.In Shaked’s case, the panel ruled that “it is not possible to see a meeting held by a minister of member of Knesset, in this case a meeting that was held within the bounds of a minister’s job description, as an ethical violation.”Earlier this year, Amiram Ben-Uliel was named and indicted for murder as the central figure allegedly behind the July terrorist attack in Duma, along with a minor whose name remains under gag order.The Central District Attorney’s Office filed indictments against the two with the Lod District Court, ending a four-month investigation that brought complaints from the Palestinians about the delay in cracking the case and criticism from the settler community for alleged torture used to interrogate the defendants.Ben-Uliel, 21, has been charged with three counts of murder, attempted murder, arson and conspiracy to commit a racist-motivated felony for the arson attack on the Dawabsha family home that killed 18-month-old Ali and his parents, Sa’ad and Riham.He could face multiple life sentences. The minor, it appears, will be charged with some lesser though still serious charges.That minor also was indicted along with another minor and an adult in the same court for other violent attacks against Arabs and their property. Police said the Duma investigation helped uncover the involvement of the others.According to the latter indictments, the three were involved in the torching of the Dormition Abbey in Jerusalem in February; the attack of a Palestinian shepherd next to Kochav Hashahar in the West Bank; the torching of a Palestinian taxi in Kafr Yussuf; the burning of a warehouse in Akraba; and two incidents in which the tires of dozens of Palestinian cars were slashed in east Jerusalem.