“A worker cannot be alone at a gas station at night. They must have the means to defend themselves. The police’s answers are not satisfactory. The police must change its approach.” 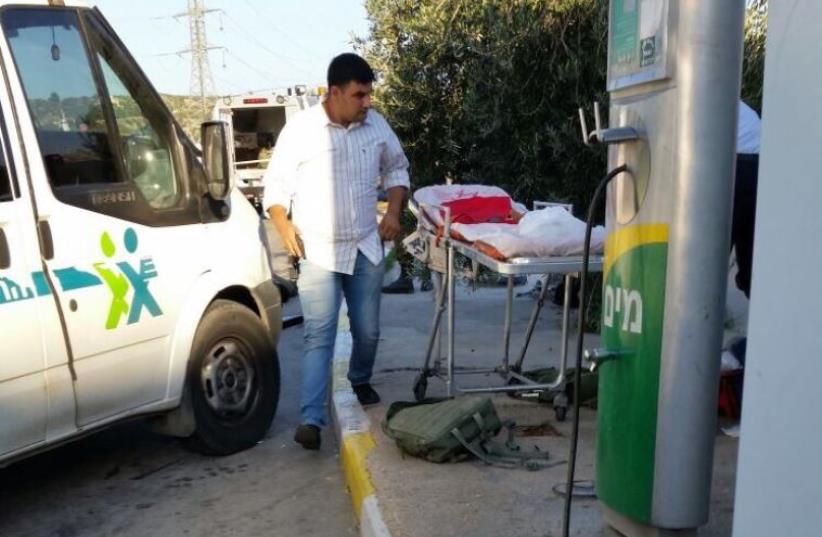 Dor Alon gas station on Route 443 where Israeli was stabbed to death in terror attack
(photo credit: MEDABRIM TIKSHORET)
Advertisement
Some 400 violent incidents took place in gas stations last year, Israel Police Investigations chief Supt. Tal Borman told the Knesset Interior Committee Tuesday.MK Eli Cohen (Kulanu) initiated the meeting following incidents of attacks on gas station attendants.The attendants often carry cash in order to give customers change, making them easy targets. In addition, many are young, as gas station attendant is one of several jobs that comes with a bonus from the government if someone holds it for at least six months soon finishing his or her IDF service.“The Knesset often discusses workers’ rights. Security is a basic right for workers. We must strengthen law enforcement, and the gas companies must be responsible for their workers,” Cohen said.Borman did not have data as to how many of the incidents specifically targeted gas station workers and how many were fights between customers, and interim Interior Committee chairwoman Revital Swid (Zionist Union) told him that not having specific information was irresponsible.Swid said: “It has been eight years since the Interior Committee last discussed this issue, and since then there has been a sharp rise in the amount of violent incidents in gas stations, from dozens to hundreds per year. That is a big warning sign.”The Zionist Union MK said the gas companies do not do enough to make sure their workers are safe, and have essentially abandoned them.“A worker cannot be alone at a gas station at night. They must have the means to defend themselves. The police’s answers are not satisfactory. The police must change its approach,” she stated.Yisrael Gornler, the security officer for gas company Sonol, said that all workers receive instructions as to what to do in an emergency, and they all have panic buttons that call the police. He also said he would consider MKs’ suggestion that gas station attendants carry pepper spray.“The police reach many stations. They also buy food at [gas station] stores, and that is a kind of presence,” he stated.Swid wondered what gas station attendants can do to defend themselves until the police arrives.Zvi Korman of the Delek Station Owners’ Organization said the attendants are instructed to give money to someone trying to rob them.“If you walk in the street and someone mugs you, you’re not protected, either,” Korman added.Boaz Arad, a Delek station owner and injured IDF veteran, reinforced Swid’s point, saying the panic buttons are not helpful, because by the time the police arrive it is too late.Arad recounted that he saw one of the attendants in a gas station ask a customer to move his car, which was parked in a way that it blocked other vehicles from passing, and the customer started to shout at the attendant. When Arad intervened and asked the customer to move his car, the customer physically attacked him, and a second customer separated them.“The problem is enforcement. When we turned to the police, the cases were closed because of a lack of public interest,” he lamented.