Israeli parliament speaker Yuli Edelstein reportedly told his US counterpart that he would be very pleased to see Trump forge ahead with the move. 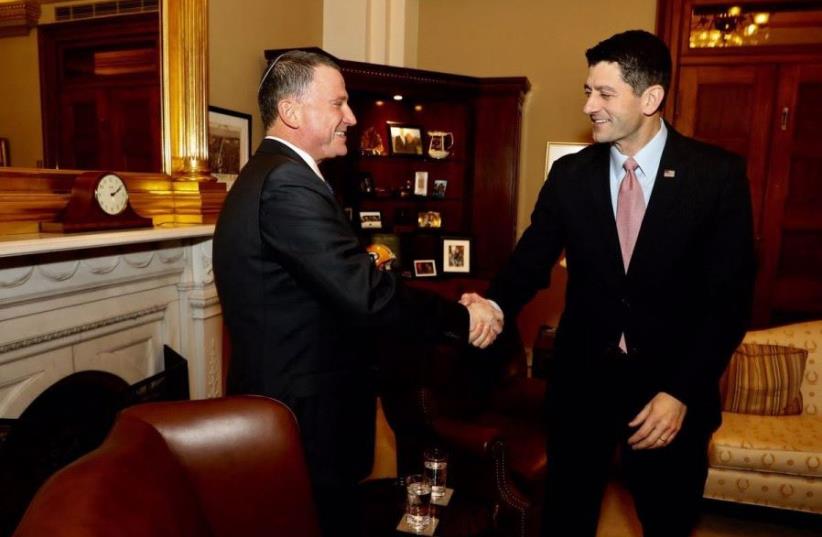 Knesset speaker Yuli Edelstein met with Paul Ryan, Speaker of the US House of Representatives, in Washington, February 1, 2017
(photo credit: SHMULIK ALMANI)
Advertisement
Knesset speaker Yuli Edelstein met with American counterpart Paul Ryan, Speaker of the US House of Representatives, on Wednesday in Washington. In the meeting, the two discussed one of the most controversial moves US President Donald Trump has vowed to promote - the possible relocation of the US Embassy in Israel from Tel Aviv to Jerusalem. Edelstein told Ryan that he would be very pleased to see Trump forge ahead with the move, and also said that he would be happy to receive backing from the US Congress. "The meaning of wide Congressional support could lead to global and regional support," Edelstein explained. "If the American embassy moves - I am utterly certain that other countries will move their embassies to the capital," he added. At the end of their meeting, the Knesset speaker invited Ryan to an official visit in Israel. Edelstein also convened with Senator Bob Corker, the current Chairman of the Senate Foreign Relations Committee. The two  discussed current affairs in the Middle East and Edelstein asked that Corker help him promote collaborations with parliamentary chairmen regarding financial, social and environmental projects in order to further strengthen relations between Israel and the US.
Donald Trump at AIPAC conference in March 2016: Will veto anti-Israel moves at UN, move US embassy to Jerusalem
While Israeli officials are anxious to see the embassy move come to fruition, the Trump administration recently stated that the move was yet to be officially determined, in a reaction that surprised those who trusted Trump's bold statements on the subject prior to the elections. New White House Press Secretary, Sean Spicer, told the press earlier in the month that "if it were already a decision, then we wouldn't be going through a process. His team is going to continue to consult with stakeholders as we get there." During his race for presidency, Trump expressed explicit commitment to the embassy move, going so far as to state that if elected, he, along with his administration, would ensure that America "will move the American embassy to the eternal capital of the Jewish people, Jerusalem." He also said that "the Palestinians must come to the table knowing that the bond between the United States and Israel is absolutely, totally unbreakable."Israel has recently expressed concern over the White House's seeming reluctance to further commit to the move, recalling that former US president Barack Obama had also made promises in the same vein and did not follow through during his tenure. While Edelstein, Prime Minister Benjamin Netanyahu and other Israeli officials urge the international community to follow through and relocate the embassy, Arab officials have been lobbying the US to back out of the move. Maen Rashid Areikat, chief representative of the Palestine Liberation Organization in the United States, was quoted by the Wall Street Journal in December as saying that the Palestinians hope the incoming Trump administration will keep the embassy in Tel Aviv. "We expect the incoming administration and the president-elect to understand the sensitivity of the issue of Jerusalem and to understand that Jerusalem hasn’t been recognized by any administration, Republican or Democrat, as the capital," Areikat said. The US  Congress passed a law mandating the move in 1995 that included a presidential waiver that lapses every six months. Each president since then has exercised the waiver, including former Obama, who did so two months before leaving office.The waiver requires that the president assess whether moving the embassy would pose a national security risk to the United States. US administrations for decades have said that such a move would precipitate anti-American violence in Muslim lands.

Dana Somberg, Michael Wilner and JTA contributed to this report.