Labor candidate complains party is acting like the mob

Dayan, a haredi woman from Mitzpe Ramon, called a press conference at the party’s Tel Aviv headquarters to highlight the corruption. 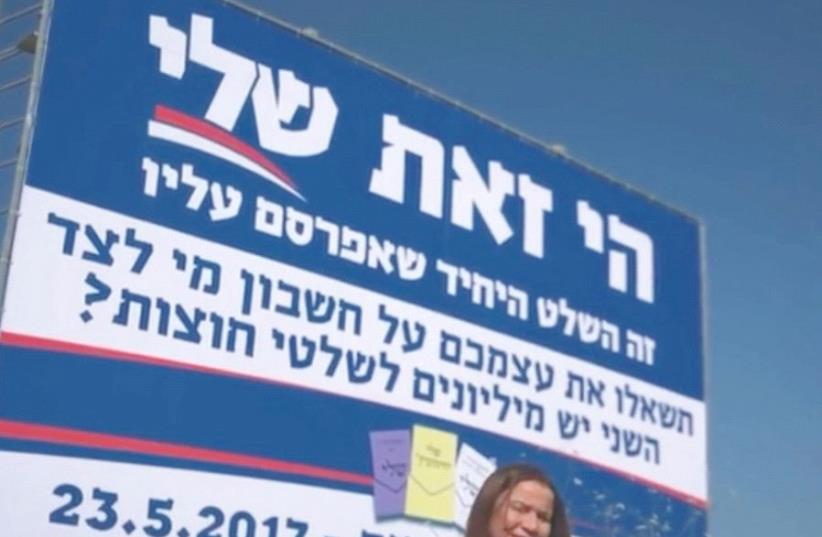 SHELLY YACIMOVICH poses in front of one of her campaign signs earlier this month.
(photo credit: YOU TUBE)
Advertisement
Corruption in the Labor Party’s membership drive has clouded the party’s July 4 leadership race, candidate Dina Dayan warned Sunday in an interview with The Jerusalem Post.Dayan, a haredi woman from Mitzpe Ramon, called a press conference at the party’s Tel Aviv headquarters to highlight the corruption. She invited the other eight candidates in the race to join her, but none of them did.At the press conference, Dayan revealed tapes of Arabic speakers who did not know that someone had registered them to the party and an old woman in Sderot who was told her family would receive supermarket gift certificates for joining.“The party should not behave like the mafia,” Dayan said. “It is delusional that this is happening.I knew I was facing a glass ceiling, but now I see the ceiling is made of cement.”Following an internal party probe, some 5,000 members whose forms had been questioned were thrown out, but some 7,000 were allowed to stay. Candidates in the race have blamed most of the problems on front-runner Amir Peretz, but Dayan blamed current party chairman Isaac Herzog.Labor’s internal court met for three hours Sunday to discuss Dayan’s charges, and will make a decision Monday on whether to appoint an external investigator to probe the drive.Dayan was backed up by candidates Omer Bar- Lev, who said that if most of the disqualified members backed Peretz, he should quit the race, and Erel Margalit, who accused Peretz of trying to steal the election and said Peretz should be forced to leave politics and public life.MKs who support Peretz’s candidacy called a press conference Sunday in which they defended him from the charges. MK Itzik Shmuly warned against “firing inside our armored personnel carrier.”MK Nachman Shai complained that there was “a last-minute effort to stop a train nearing its final station” and “a pathetic, cynical and ugly attempt to divide the party.”Labor candidates also engaged in mutual recrimination over the weekend when candidates Avi Gabbay and Amir Peretz accused incumbent Herzog of using US President Donald Trump’s diplomatic efforts as an excuse to try to join the government. Gabbay said Labor lost 12 mandates under Herzog because of his past attempts to join.Herzog responded by noting that Gabbay was a minister in Netanyahu’s government and that he cannot scold anyone in Labor after he “enabled the formation of a right-wing extremist coalition.”Herzog said that even if Trump’s peace efforts were genuine, the Zionist Union would only back them from the opposition.A Midgam poll broadcast over the weekend on Channel 2 found that the Zionist Union would win only 12 seats (down from its current 24) under Herzog and would win 15 under the leadership of former prime minister Ehud Barak, who reiterated Sunday that he is not returning to politics.The poll found that the Likud, which had fallen in the polls over the past year, has returned to its current 30. Yesh Atid, which had passed Likud in many polls, fell to 22 seats, which is twice what it has in the current Knesset, but fewer than other recent polls had predicted.