Regavim, which monitors illegal Palestinian building, showed the politicians maps to explain how the construction was strategically placed to help the PA increase its hold over Area C. 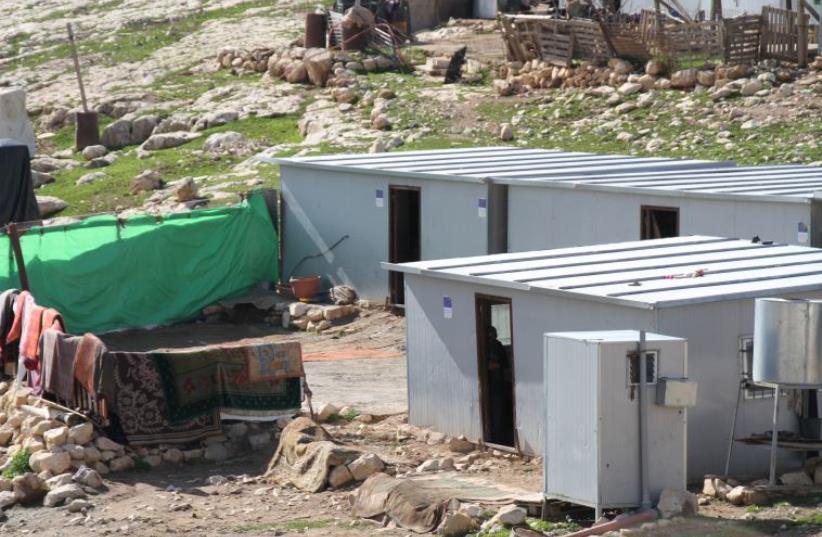 Illegal Palestinian Beduin structures funded by the EU in the area of Ma'aleh Adumim.
(photo credit: TOVAH LAZAROFF)
Advertisement
The European Union must stop funding illegal Palestinian building in the West Bank, Likud MK Yoav Kisch said on Sunday during a tour of Judea and Samaria sponsored by the Knesset’s Land of Israel Caucus.“A war is being waged over Area C,” Kisch said.He spoke after politicians, led by the non-governmental group Regavim, had visited a number of areas where the EU has funded one room modular homes for Palestinian Beduin around the Ma’aleh Adumim area.Politicians could see that on each structure the EU had placed a sign with a logo, so it was clear that they had supported the new housing.Regavim, which monitors illegal Palestinian building, showed the politicians maps to explain how the construction was strategically placed to help the PA increase its hold over Area C.The group estimates that between 2012 and 2014 some 400 modular structures were built in Area C with the EU’s help.“The migration of Palestinians with the help of the EU from Areas A and B and their infiltration into Area C must be stopped,” Kisch said.On the one hand the EU is engaging in normal relations with Israel, but on the other it is acting unilaterally against it, Kisch said.MK Bezalel Smotrich (Bayit Yehudi) charged that the Palestinians were trying to create de facto facts on the ground. On top of that, he said, the government has done little against illegal Palestinian building and the EU financing of it.The EU has said that its support of housing is humanitarian assistance, which is permissible under international law.