Plenum vote delayed until Monday; Ben-Dahan: ‘Annexation from whom? Israel has the right on land’ 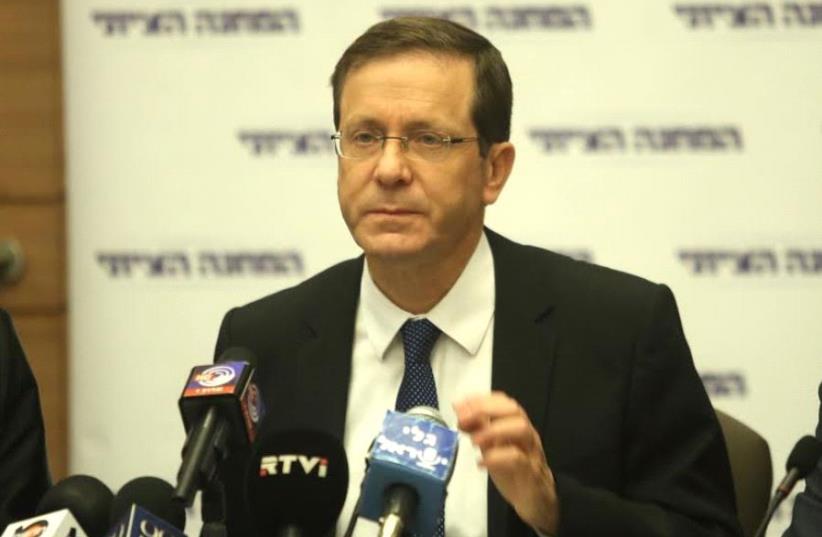 Isaac Herzog
(photo credit: MARC ISRAEL SELLEM)
Advertisement
Approval of the so-called “settlement regulation bill” is tantamount to de facto annexation, opposition and Zionist Union Party head MK Isaac Herzog warned on Monday afternoon.Prime Minister Benjamin Netanyahu told his faction meeting, “We plan to advance the legislation this week. Its objective is to prevent [legal] deficiencies and attempts to harass settlements in Judea and Samaria.”The Knesset was scheduled to vote on the bill Monday night, but it was delayed by technical issues and filibuster attempts by the opposition. After a long day of discussions at the Knesset House Committee it was decided that the vote would take place next Monday. It was also agreed that opposition lawmakers would have a chance to voice their reservations in special overnight discussions on Tuesday and Wednesday.Herzog argued before his faction that there are many reasons to reject the legislation altogether.“The bill seriously endangers Israel. It is [tantamount] to de facto annexation and goes against all of Israel’s international obligations. It is because of this legislation that the UN Security Council passed a resolution on the settlements,” said Herzog.“There is no other instance in the nation’s history when the Knesset voted against the nation’s laws and against the option of several legal experts in the government,” he said.In the Zionist Union faction meeting in the Knesset he called on coalition members to understand the fateful nature of the vote and to act responsibly by rejecting the legislation.Zionist Union MK Tzipi Livni charged that Prime Minister Benjamin Netanyahu, who spoke of the legislation only at the last moment, was advancing the bill for political reasons.“What we are witnessing today is a deal that was struck between the Bayit Yehudi Party and Netanyahu. They will offer him [political] silence in exchange for the legislation,” she said.Deputy Defense Minister Eli Ben-Dahan dismissed allegations made at the Zionist Union faction meeting, saying legal experts had reviewed the bill and did not find it problematic. “Law professors attended the [joint] committee and proved that there is no problem with the bill concerning international law,” he told The Jerusalem Post. “Israel has the right to pass a law that will regulate the way lands are being acquired in Judea and Samaria. There is no contradiction to an international amnesty here.”Ben-Dahan also challenged claims that the bill is tantamount to de facto annexation of the West Bank. “Who are we annexing the land from? The last sovereign power on the land was Jordan, and only the United Kingdom and Afghanistan recognized its right on the land. Israel has the right to the land,” he said. “I trust this bill and I am certain that it is legitimate. I think that after 50 years it is about time to regulate the settlement in Judea and Samaria, and I am not ashamed to say we [Bayit Yehudi] want to apply our sovereignty there.” Attorney-General Avichai Mandelblit has told Netanyahu that the legislation is unconstitutional and wouldn’t stand up before the High Court of Justice.He further warned that it could sway the International Criminal Court to rule on the issue of West Bank settlements.In reaction to Mandelblit, Deputy Foreign Minister Tzipi Hotovely said the cabinet needs to advance a bill that will allow legal protection in such cases. “This absurd situation in which the attorney-general refuses to defend a legitimate government bill puts us in a spot in which he replaces the lawmakers,” she said.“It harms the will of the people that have chosen this government and Knesset to promote their policies. This government should get to the High Court with real representation, and not as someone that knows in advance that he lost,” Hotovely added.Right-wing lawmakers have argued that the legislation – which would retroactively legalize some 4,000 settler homes built on private Palestinian property in Area C of the West Bank – is a necessary step to prevent them from demolition.Legal experts on the Right have noted that the legislation would provide compensation for Palestinian landowners, a move that would bring Israel into compliance with international law.Earlier in the day, the special joint panel of representatives from the Knesset Constitution, Law and Justice Committee and Foreign Affairs and Defense Committee gave their vote of approval to the legislation, a necessary step before the bill heads to the plenum for second and third readings.During the committee’s debate, hundreds of pro-settler demonstrators rallied outside the Knesset in favor of the legislation.Inside, MK Merav Michaeli (Zionist Union) said she had been reached by the coalition in support of postponement and was even offered a week-long delay of the vote.However, she clarified that the opposition is against such a move. “If they want to kill the bill, they should do it themselves,” Michaeli said, suggesting that even lawmakers from the coalition have doubts about the bill. “It should be clear that we are against this bill,” she added.During the panel discussion, MK Michal Rozin (Meretz) labeled the legislation “the theft [of land] bill” and “the bill to damage our foreign relations. Supporting the bill shows that you forgot your Jewish morals,” she said.When she asked the participants “Why won’t you annex the whole territory already?” MK Bezalel Smotrich (Bayit Yehudi) replied “The act of annexing is of something that is not ours – this is our land.”MK Nachman Shai (Zionist Union) a member of the panel that opposes the bill, said on Twitter that the government is leading the country in the wrong direction. “This bill will be canceled by the High Court and the International Criminal Court in The Hague. The more we regulate [illegal settlements] the more we go down,” he said.