'Liberman backed Kerry while Ya'alon was insulting him,' Indyk says

Former US ambassador to Israel tweeted on Sunday that while Liberman has made 'reprehensible' comments, he did support his boss' peace efforts. 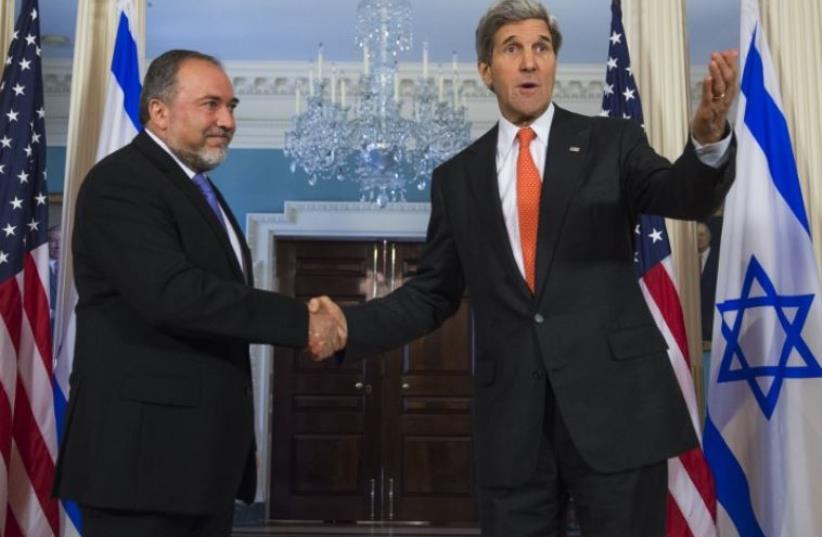 US Secretary of State John Kerry (R) and then-foreign minister Avigdor Liberman shake hands in Washington
(photo credit: AFP PHOTO)
Advertisement
Avigdor Liberman, whose official appointment to the position of defense minister is by all indications imminent, has a surprising supporter – Martin Indyk, the former US ambassador to Israel.Indyk tweeted on Sunday that while the departure of Moshe Ya’alon has been a source of lament on the part of commentators and political observers in Israel and abroad, it was Liberman who publicly supported his boss, US Secretary of State John Kerry, during his aborted attempt to jumpstart the peace process.“Liberman says reprehensible things but I remember that he supported SecState Kerry's peace efforts when Ya'alon was insulting him,” Indyk tweeted.

Lieberman says reprehensible things but I remember that he supported SecState Kerry's peace efforts when Ya'alon was insulting him.
— Martin Indyk (@Martin_Indyk) May 22, 2016


As foreign minister in the previous Netanyahu administration, Liberman startled the public when he said he would cede territory in favor of national unity. He also endorsed Kerry as a true friend and advocated for a population swap as part of a final status agreement with the Palestinians.Liberman has long espoused a two-state solution that calls for new Israeli borders based on a new map that would place Israeli Arab population centers in a Palestinian state and allow for Israeli to retain Israeli settlements.Peace plans in the past, have also referenced this possibility, which is supported by international law, he said.“This kind of population and territory swap should be part of a final status agreement,” he said.“It’s not a utopian idea,” he said, its is both legal and historical.Of the secretary of state himself, Liberman said, “John Kerry is a true friend of Israel. I do not see the wisdom of transforming friends into enemies.” It’s almost as if Israeli politicians are in a contest with each other as to who can make the most scathing comments about Kerry, he said.Ya'alon, meanwhile, was forced to apologize to the US after a 2014 report in Yediot Aharonot triggered a diplomatic incident.The report quoted Ya’alon as saying in private meetings that Kerry’s diplomatic efforts stemmed from an “incomprehensible obsession” and “a messianic feeling.”Ya’alon said Kerry should “take his Nobel Prize and leave us alone,” according to the paper.Kerry, he reportedly said, “cannot teach me anything about the conflict with the Palestinians.”Kerry’s efforts to reignite the peace process failed as Israel and the Palestinians engaged in a series of mutual recriminations over contentious issues including settlement building, incitement to violence, and recognition of Israel as a Jewish state.