"Westerwelle was a true friend of Israel, and I had the privilege of working with him," the former foreign minister said. 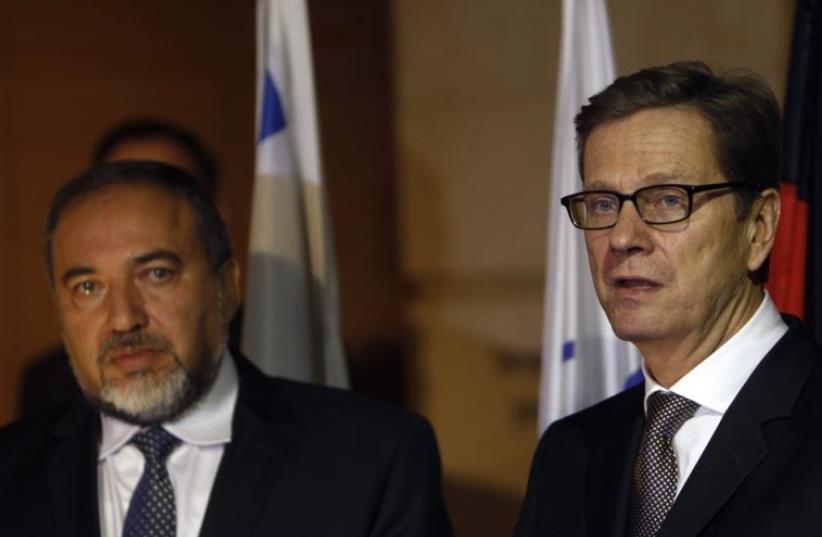 Former foreign minister Avigdor Lieberman (L) stands next to his German counterpart Guido Westerwelle in Jerusalem
(photo credit: REUTERS)
Advertisement
Former German Foreign Minister Guido Westerwelle, the first openly gay leader of a mainstream political party, has died from blood cancer at the age of 54, his foundation said on its website on Friday.MK Avigdor Liberman (Yisrael Beytenu), who served as foreign minister between 2009 and 2013, eulogized Westerwelle, praising him for his friendship and sympathy with Israel."Westerwelle was a true friend of Israel, and I had the privilege of working with him," Liberman said. "Together, we worked to strengthen and develop ties between Israel and Germany."Westerwelle was leader of the business-friendly Free Democrats (FDP) from 2001 until 2011 and foreign minister during Chancellor Angela Merkel's second term from 2009 until 2013.His foundation announced in mid-2014 that he had been diagnosed with acute leukemia. He last appeared in public in November, presenting a book on his battle with blood cancer called Between Two Lives."We mourn Guido Westerwelle. Our sympathy goes out to his husband and his family," the FDP said in a short statement.
"I'm lost for words. Guido has fought so hard. The grief is great," FDP leader Christian Lindner said in a tweet.Westerwelle was committed to promoting free markets and small government, with tax cuts at the heart of his party's election programs.Born in Bad-Honnef, near Bonn in western Germany in 1961, he trained as a lawyer and was elected to the Bundestag lower house of parliament in 1996.He became chairman of the FDP five years later and was widely credited with broadening the appeal of the party, especially among younger voters.In the run-up to the 2002 federal election, Westerwelle tried to stir up voters with an American-style campaign, traveling around Germany in a bus dubbed the "Guidomobil," but fell well short of his declared target of winning 18 percent of the vote and remained in opposition.Seven years later however, the FDP won nearly 15 percent of the vote, its best-ever election result.Westerwelle became foreign minister and vice-chancellor under Merkel but quickly ran afoul of the German media who criticized him for taking his partner, a German businessman, on several of his official trips abroad.In March 2011, he came under fire for siding with China and Russia and abstaining in a vote in the United Nations Security Council authorizing a no-fly zone over Libya, a mission that later led to the ouster of dictator Muammar Gaddafi.The move looks better with hindsight given the turmoil that has swept Libya since Gaddafi's fall. But at the time, Westerwelle was criticized for ignoring decades of German policy in breaking with western allies like the United States, Britain and France.Later that year, following heavy losses in regional elections, Westerwelle was forced to give up the leadership of the FDP. Two years later, the party failed for the first time in the post-war era to make it into the German parliament. Jpost.com staff contributed to this report.
Advertisement
Subscribe for our daily newsletter