First Israeli F-35 jet rolled out out at Lockheed Martin production plant in Texas; IAF Chief of Staff: Flying the simulator, I felt I had ‘the future in my hands 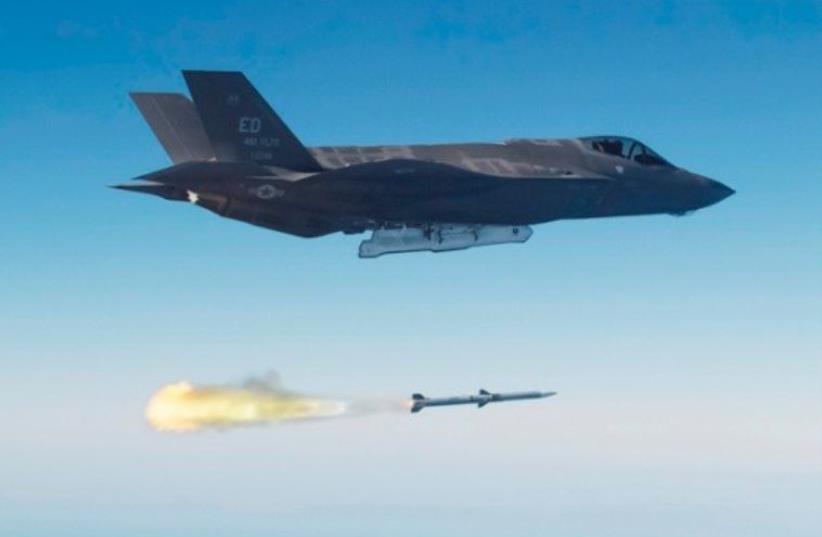 F-35 fighter jet
(photo credit: LOCKHEED MARTIN)
Advertisement
FORTH WORTH, Texas – The arrival of the F-35 stealth fighter aircraft will beef up Israeli deterrence against its enemies, Defense Minister Avigdor Liberman said here on Wednesday, during a ceremony to unveil the first of such aircraft destined for the Israel Air Force.Liberman, speaking during the rollout ceremony, said the F-35 would also greatly improve “our operational capabilities, for a long time.“The State of Israel is proud to be the first in our region to receive and operate the plane,” Liberman added. He described the jet as “the most advanced in the world, and is the best selection by defense chiefs for safeguarding Israel’s aerial superiority.”Brig.-Gen. Tal Kelman, the IAF’s chief of staff, said he “had the future in my hands” while testing out the F-35 simulator.He added that the plane’s breakthrough technology, lethality, and machine-man interface “will lead the world to the fifth generation.”The roll out ceremony was held at Lockheed Martin’s Air Force Plant 4 in Fort Worth, Texas, and was attended by IAF senior personnel, government representatives, as well as US government and military officials.Lockheed Martin said the warplane will form a key pillar of Israel’s qualitative military edge in the Middle East, adding that the platform is equipped to defeat emerging threats, including “advanced missiles and heavily-defended airspace.”Israel has ordered 33 F-35A variants, which conventionally take off and land. It also seeking an option of ordering 17 additional F-35A aircraft.Israel Aerospace Industries are producing F-35A wings for all planes worldwide, while Elbit Systems has produced a third generation helmet-mounted display system for all F-35 pilots.The US military has begun replacing its fighter aircraft with the F-35. Three distinct variants of the F-35 will replace the F-16 Fighting Falcon for the US Air Force, the F/A-18 Hornet for the US Navy, the F/A-18 and AV-8B Harrier for the US Marine Corps. They will also form the chief fighter jet platform for at least 10 other countries.Israel will install its own cyber defenses on the American-made jet, Kelman said. The IAF chief praised the jet across the board, saying Israel’s ability to defend itself would increase.However, Kelman also expressed concerns over the existing level of cyber defenses on board the aircraft, saying Israel received approval from the US and Lockheed Martin to install its own cyber defenses.Kelman said the IAF is also striving to achieve an independent ability to maintain the aircraft within the country’s borders, due to daily fighter jet operations, and the need to ensure rapid deployment in the event of a sudden conflict.“We are integrating Israeli defense companies to carry out some of the maintenance,” he said. The US will still be responsible for basic maintenance functions, which it will carry out at an installation at the IAF’s Nevatim Air Base near Beersheba.Fifty percent of pilot training will be carried out on the F-35 simulator, Kelman said, amounting to a five-fold increase in the percentage of simulator training that occurs with older, fourth-generation jets like the F-16.Two F-35 squadrons will be based at Nevatim, and if Israel acquires a third squadron, it would likely be deployed at another base, Kelman said. The IAF is seeking to expand the number of jets it will receive from 33 to 50, with a view of eventually having 75 aircraft at its disposal.After the first two F-35 jets arrive in 2016, Israel will receive six to seven per year, until the first batch of 33 jets is delivered. One of those planes will be experimental, enabling Israel to later fit the squadrons with Israeli-made munitions and other on-board systems.An initial squadron has already been set up, and its pilots have been described by Kelman as an air force “dream team.”“They are the best we have,” he said.After the squadrons become operational, its pilots will have completed air force training school, and will have flown the older F-16s and F-15s, before taking control of the F-35s.